Angela Highland is joining us today with her novel Vengeance of the Hunter. Here’s the publisher’s description.

The Knight: After nearly being destroyed by a conspiracy within his Order, Kestar faces a crisis. The Knights of the Hawk have always stood against elven magic, but how can he proceed after discovering his own elven heritage? How will his Order react when they discover the truth?

The Healer: Free of the shackles of the Duke of Shalridan, Faanshi sets out to pursue her destiny with the elves—and finds herself at the head of an open rebellion. But her goddess isn’t done with her yet, and controlling her magic turns into the fight of her life. One she cannot win without both Kestar and Julian by her side.

The Hunter: Rattled to his core after Faanshi healed his eye and hand, and haunted by guilt and a growing love for the elven healer, Julian flees. As he seeks retribution against shadows of his past, convinced of his own unworthiness, he’ll need all of Faanshi’s faith to turn him from the path of vengeance to help save Kestar, and the whole of Adalonia. 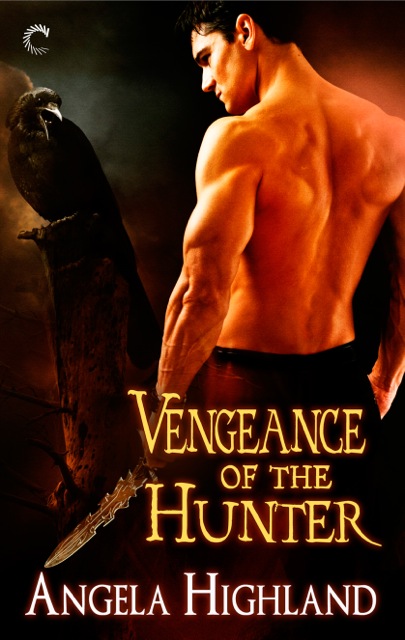 There are two things readers should know about Vengeance of the Hunter, if they’re coming in new. One, it’s book 2 of a trilogy, the Rebels of Adalonia. And two, the series as a whole is structured around three main characters: the assassin Julian; the knight Kestar; and the healer and escaped slave girl Faanshi.

While I love many different things about my three characters, in some ways Faanshi is my favorite. She’s the one who goes on the biggest journey, starting in book 1, Valor of the Healer. Her journey takes her not only from slavery into freedom—and the discovery that she possesses power strong enough to challenge an avatar of the gods—but also from abasing herself to believing in herself.

With that in mind, many of my favorite bits of both the first and second books feature Faanshi. Like this one, from Chapter Three, when Faanshi and Julian and their elven companions have had to fight off a patrol trying to capture them, all while Julian is still reeling from Faanshi having had to save his life:

His head drooped onto her shoulder as he trailed off, leaving her no option but to hold him close and let her restless power flood over him. It gentled as it struck, and Julian palpably relaxed—too much so, for she had to struggle to continue to hold him up. “Can you hang onto me? Can you walk? We can’t stay here!”

“No,” he agreed, though his voice was thin and faint now, as though he spoke from a great distance away. “Get you out of here. Keep you safe.”

As she lifted a still-glowing hand to smooth his hair, Faanshi said swiftly, “You are. You killed the man who would have seen me Cleansed. You pushed me away from the fire that would have struck me down.”

She wasn’t at all sure she’d heard those muttered words correctly, but they caught somewhere behind her breastbone and stayed there, refusing to be dislodged or denied. Little dove. Nine-fingered Rab had called her that. It was different from Julian; how, she wasn’t prepared to name.

“Brave Rook,” she murmured. That made him lift his head and blink at her in hazy surprise, exactly as she’d hoped he might. “If anyone says you’re not a good man, Almighty Djashtet be my witness, I’ll hit them. Later. We need to move now. Please. I can’t carry you.”

I love this bit since it captures what I consider to be the essence of Faanshi’s character: her gentle but indomitable strength. Genre readers and writers alike have heard a lot in the last few years about the prototypical Strong Female Character, who more often than not is aggressive with her words and her fists alike—the exact opposite of Faanshi, who is about as far from aggressive as it’s possible for a character to be. This has made writing her a challenge. How do you show the strength of a meek, shy character?

Making Faanshi a powerful mage is one answer. But it’s almost too easy, since the true strength of her character lies not with her magic, but rather, with how she chooses to use it—and how she rises to face each challenge the story presents her. Bits of the story like this one give me an opportunity to show how she’s bravest when she’s rising to the defense of those she holds dear. In this bit with Julian, she gets not only join in a fight with him, she also must keep him on his feet so they can flee. And she even gets in an assertion of her faith in Julian’s own character.

Vengeance of the Hunter focuses on Julian’s main character arc, whereas Valor of the Healer was Faanshi’s. But as the stakes rise in this second installment of the trilogy, Faanshi, Julian, and everyone else in the cast find their various strengths tested.

With almost everyone else in the cast, those tests center on Faanshi. Which is a lot to ask for a girl who’s only recently gained her freedom, never mind discovering she’s one of the most powerful magic users the country of Adalonia has ever seen.

But I think she’s holding up splendidly. And I hope you’ll come see how she’s done.

Angela (Anna the Piper to her friends) lives in Kenmore, Washington, along with her partner and housemate, two cats, and a whole heck of a lot of computers and musical instruments. She’s a raving fangirl for Newfoundland and Quebecois traditional music, and since one language isn’t enough to contain her geekery, she’s learning to read SF/F in French. Also, despite the fact that she is a mild-mannered former employee of a major metropolitan newspaper, rumors that she is a superhero are exaggerated. (Even if she did pull the door off a refrigerator.)

1 thought on “My Favorite Bit: Angela Highland talks about VENGEANCE OF THE HUNTER”