Alethea Kontis is joining us today with her novel When Tinker Met Bell. Here’s the publisher’s description:

Everybody knows that goblins and fairies can’t be friends. But that never stopped Tinker and Bell.

Bellamy Merriweather Larousse isn’t like the other fairies at Harmswood Academy, with her giant wings and their magical dust. “Southern Bell” works as a barista at The Hallowed Bean to help pay her tuition and remains active on the cheering squad, despite her insistence on associating with the unpopular crowd. Every day is sunny in Bellamy’s world and every cloud has a silver lining. The only way to upset Bell’s stalwart optimism is to threaten one of her misfit friends…or try to take one of them from her.

Unbeknownst to everyone—including him—outcast Ranulf “Tinker” Tinkerton is about to be named heir to the throne of the Goblin King, making him ruler of his fellow Lost Boys and the labyrinthine city they inhabit. Now that the time has come for Tinker to leave Harmswood behind, will he be brave enough to share his feelings for Bellamy? It’s no secret that he’s held a torch for her since the fourth grade, but no matter how long they’ve been friends, goblins will always be allergic to fairies. 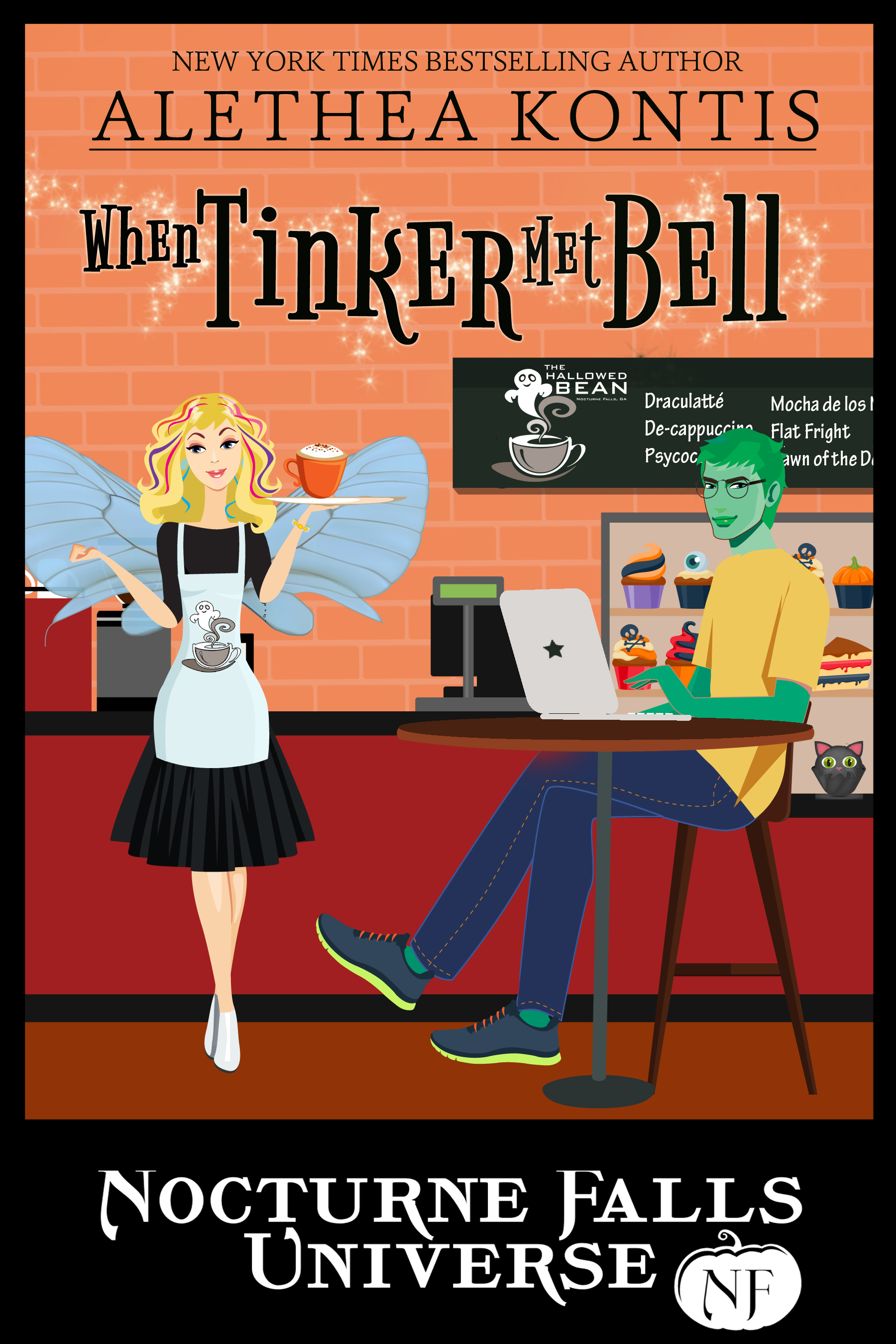 When I tell people “I grew up at the movies,” what I mean is that my much older sister dated (and then married) a guy whose family owned all the movie theaters in Burlington, Vermont. I spent many a summer as a kid tearing tickets, sweeping up popcorn, and watching pretty much every major motion picture that got released.

In 1984, Romancing the Stone gave me my raison d’être. I wanted to be Joan Wilder, receiving that box of my own books like George McFly did at the end of 1985’s Back to the Future. And then, in 1986, David Bowie danced with Jennifer Connelly for about thirty seconds in a dreamlike masquerade-bubble sequence. I wanted that, too. I wanted that dress, that masque. I wanted some beautiful, mischievous imp of a man to look at me the way the Goblin King looked at Sarah, with so much said between us, even though neither of us spoke a word.

Yeah…I never got that.

But you know the great thing about being a writer? All those magical, amazing moments we are denied in life, we can someday write into a novel.

Contrary to just about everything I’ve ever penned, the title of When Tinker Met Bell came first. I had an optimistic, cheerleader fairy barista in The Truth About Cats and Wolves named Bellamy Larousse. She became my heroine. Tinker was…Ranulf Tinkerton, a goblin. But goblins and fairies can’t be friends. Why? Because goblins are allergic to fairies. Great. Now I’ve gone from Harry and Sally to Romeo and Juliet. How am I supposed to make a romantic comedy out of that? Well, I’ll…crown Tinker heir to the throne of the Goblin King! The Goblin King is immune to fairies. But before all that happens, Tinker promises Bell a dance. Once dance. At a masquerade. A Midwinter masquerade, so everything’s white. Bellamy will have a ridiculously huge, silver-white ballgown. Tinker will get a similarly ridiculous suit and a goblin mask. And then I’ll stick the two of them in a snow globe!

Some authors play God with their characters. I prefer the role of Fairy Godmother.

The thing I love most about the masquerade scene in When Tinker Met Bell is that it’s not just a three-minute montage set to David Bowie crooning “As the World Falls Down.” (Though you’re welcome to imagine the DJ is playing that in the background while you read.) There are longing looks, but there’s also dialogue. There is a war of emotions, laughter and tears, a discussion about wishes and treasures and the issue of consent…all made as romantic as humanly possible and covered in glitter snow.

There’s even an Easter egg for my fellow Shakespeare lovers! Mentions of Romeo and Juliet are un-subtly sprinkled here and there throughout When Tinker Met Bell, no surprise in a story about star-crossed lovers. But in that snow globe, keep an eye out for the moment when “palm to palm is holy palmers’ kiss.” Oh yeah. I went there. And then, dear saint, lips totally do what hands do. Because that’s what should have happened in the movie, right?

Maybe. Maybe not. But that’s what happens in my snow globe, and it is just as beautiful and perfect and meaningful a moment as I could have wished for. That scene is—quite literally—my dream come true.

And that is why it is my favorite bit.

Alethea Kontis is a princess, author, fairy godmother, and geek. Author of over seventeen books and contributor to over twenty-five more, her award-winning writing has been published for multiple age groups across all genres. Host of “Princess Alethea’s Fairy Tale Rants” and Princess Alethea’s Traveling Sideshow every year at Dragon Con, Alethea also narrates for ACX, IGMS, Escape Pod, Pseudopod, and Cast of Wonders. Alethea currently resides on the Space Coast of Florida with her teddy bear, Charlie. Find out more about Princess Alethea and the magic, wonderful world in which she lives here: https://www.patreon.com/princessalethea

1 thought on “My Favorite Bit: Alethea Kontis talks about WHEN TINKER MET BELL”