Alan Smale is joining us today with his novel Eagle and Empire. Here’s the publisher’s description:

The award-winning author of Clash of Eagles and Eagle in Exile concludes his masterly alternate-history saga of the Roman invasion of North America in this stunning novel.

Roman Praetor Gaius Marcellinus came to North America as a conqueror, but after meeting with defeat at the hands of the city-state of Cahokia, he has had to forge a new destiny in this strange land. In the decade since his arrival, he has managed to broker an unstable peace between the invading Romans and a loose affiliation of Native American tribes known as the League.

But invaders from the west will shatter that peace and plunge the continent into war: The Mongol Horde has arrived and they are taking no prisoners.

As the Mongol cavalry advances across the Great Plains leaving destruction in its path, Marcellinus and his Cahokian friends must summon allies both great and small in preparation for a final showdown. Alliances will shift, foes will rise, and friends will fall as Alan Smale brings us ever closer to the dramatic final battle for the future of the North American continent. 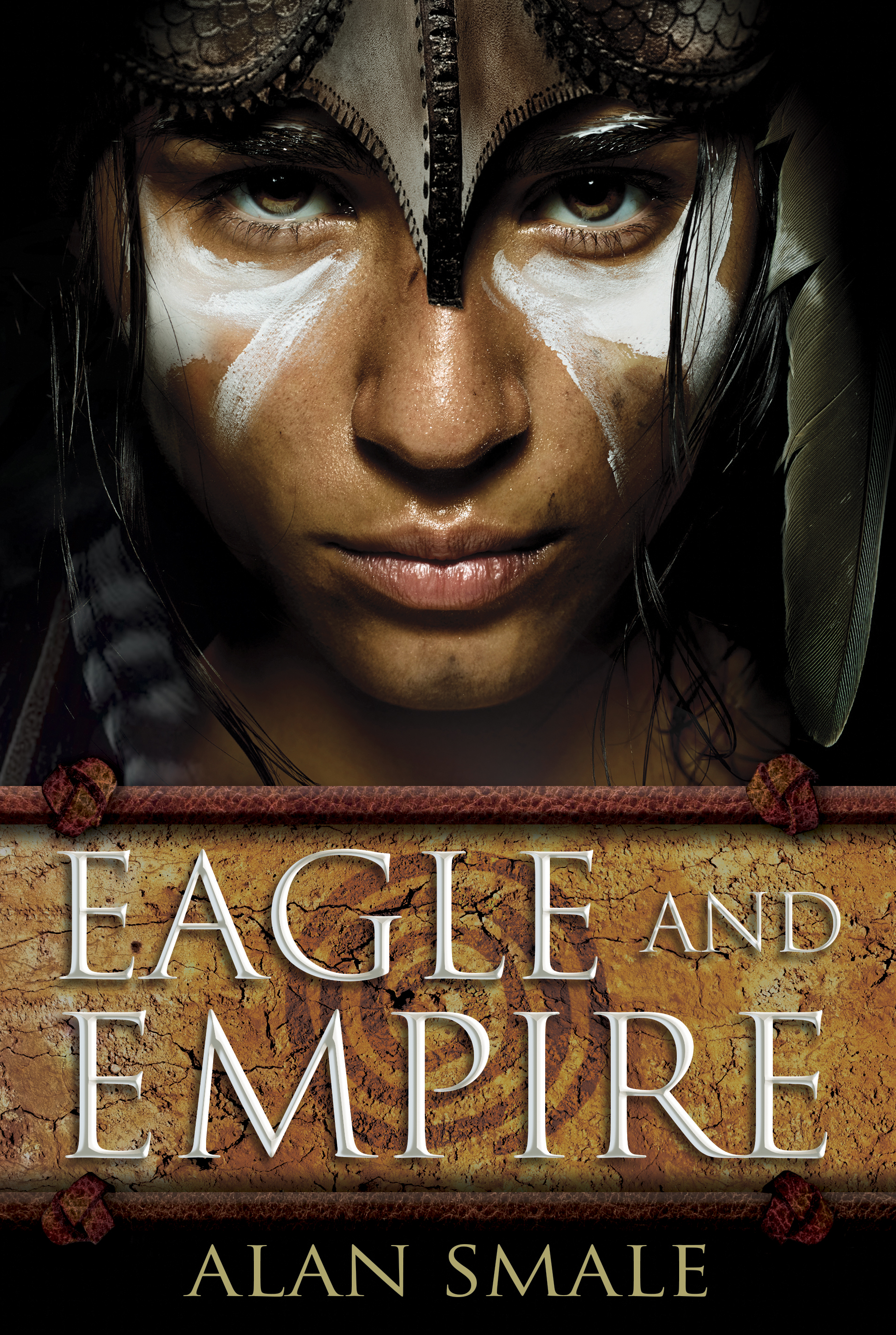 The Mongols are coming!

Yep, Book Three is where everything comes together; where all the wheels that have been set in motion throughout the Clash of Eagles series finally, um, smash into one another. It begins with the city of Cahokia and the forces of Rome in an uneasy alliance that’s constantly on the verge of collapsing into violence and – as must be obvious from the book blurb – powers its way forward to a climactic confrontation with the forces of Genghis Khan on the Great Plains, a terrain so similar to the steppes of Asia that the Mongols hold a significant advantage.

So there’s plenty of action in Eagle and Empire, but there’s also closure for a number of other story arcs that have absorbed me (and hopefully some of you) for many years. Because, while summaries of the books naturally focus on the battles and other large-scale action, I also really enjoy the many character interactions.

In addition to my battered hero, Gaius Marcellinus, we have Tahtay, once seriously wounded in battle, half Blackfoot, but now war chief of Cahokia. There’s Kimimela, Marcellinus’s adopted daughter and an increasingly competent pilot of the great Cahokian Hawk craft – effectively hang gliders made of sticks, skins, and sinew. There’s the precociously smart Enopay, who you can always rely on for a piercing opinion or a wisecrack. These characters we met as kids have now grown up into lives they could never have foreseen.

And then there’s Sintikala, chief of the Hawk Clan, whose face graces the cover of Eagle and Empire. (I am deliriously happy with this cover, by the way. Love what Del Rey have done with all my covers, but this one is exceptional.) And I’ve really enjoyed writing a number of the other characters: Taianita, once a captive in the hostile Mississippi city of Shappa Ta’atan and now struggling to make a future for herself as a warrior; Akecheta, the Cahokian centurion; the warriors Mahkah and Takoda; Hanska, veteran female warrior of Cahokia. The deceitful Pezi. Aelfric, the snarky Briton. The Emperor Hadrianus III and his generals Lucius Agrippa and Decinius Sabinus. I’m getting all nostalgic even typing the names. Each has some big moments in the third book.

And, in whatever space my characters really inhabit, I’d like to apologize to some of them for the things I put them through in Eagle and Empire.

There are scenes in Empire that I’d been looking forward to writing for years. Some are way too spoilery to use here. So for my Favorite Bit we’re coming back to Cahokia, that great Mississippian Culture city of 20,000 inhabitants and 120 platform, conical, and ridge mounds. Cahokia is deep in the heart of Nova Hesperia (located where St. Louis is now), and so central to the story that it’s practically a character in its own right.

In all the years Marcellinus had spent in Cahokia he had never been atop the Great Mound at night. He had stood there when the sun set, first when his life was in Great Sun Man’s hands and later when Tahtay had taken over as paramount chief, but he had always left before dusk was over and full night had descended.

And this night was especially dark. It was the new moon, and heavy cloud blanketed the city in humidity, shrouding the starlight. The cedar steps up the mound were mostly level and even, but Marcellinus had still managed to trip over his own feet several times on his way to the mound’s crest. Once there, he stopped and turned. Despite the heat, Cahokia was studded with cooking fires. Their smoke, along with the aroma of roasting meat and corn, reached Marcellinus even at this height. Within and between the houses, often appearing to float back and forth through the streets and across the plazas, were the faint glows of lanterns in the hands of Cahokians going about their duties before turning in for the night.

Marcellinus looked left. Far away to the east were the bluffs, but he could not see them in the haze. Closer was the steady glow of the foundry in the steelworks and a much fainter glimmer of lamplight from the Big Warm House. In the summer months they let the furnaces idle, but the older Cahokians still went to the baths to soak their aching limbs in the hot air and cool water and complain about their grandchildren.

To his right the fires and lamps of western Cahokia extended as far as the river in cheerful disarray, all but disappearing into the murk. But beyond them the fortress of Legio III Parthica shone bright, its walls and streets defined by rows of brilliant military lanterns. By comparison with the scattered flames of Cahokia the castra looked oddly square and sharp, almost sinister.

And behind Marcellinus stood the Longhouse of the Wings, long and dark.

Marcellinus is there to meet Sintikala, love of his life, but finds a despondent Tahtay there instead. With Rome so near, and so many divided allegiances, it’s the only place they can talk without the risk of being overheard:

“Even in the sweat lodge I cannot speak freely. Only here in the center of Cahokia, where we are the only men on a great and sacred mound inside a tall palisade, while Wahchintonka, Dustu, and a few other trusted men guard the gates below.”

It’s to be their last meeting before Marcellinus heads off to Yupkoyvi, in the desert southwest (the place we know today as Chaco Canyon, with its Great Houses of the Ancestral Puebloan culture). Marcellinus and Tahtay discuss the future: their strategies for dealing with the Emperor and his army and trying to avoid further bloodshed, and the steps that Tahtay will take with the Hesperian League of allied tribes in Marcellinus’s absence. They fumble their way through matters of fragile diplomacy and political intrigue, so alien to either of their personalities. And, finally, they talk of much more personal matters. The topics Marcellinus and Tahtay discuss by night on the Great Mound will ripple through to the very end of the book, and the friendship that is solidified here will be crucial to its resolution.

And that’s my third Favorite Bit, and a wrap for the Clash of Eagles series. Thanks again, Mary, for letting me talk about them all here!