Selena Chambers is joining us today with her collection of short stories Calls For Submission. Here’s the publisher’s description:

Selena Chambers’ debut collection guides readers out of space and time and through genre and mythos to explore the microcosmic horrors of identity, existence, and will in the face of the world’s adamant calls for submission. Victorian tourists take a virtual trip through their (and the Ottoman empire’s) ideal Orient; a teenage girl learns about independence and battle of the bands, all while caring for her mesmerized, dead mother; a failed Beat poet goes over the edge while exploring the long-abandoned Government Lethal Chambers. Visceral, evocative, and with a distinct style that is both vintage and fresh, Calls for Submission introduces a glowing, new writer of the weird and strange. 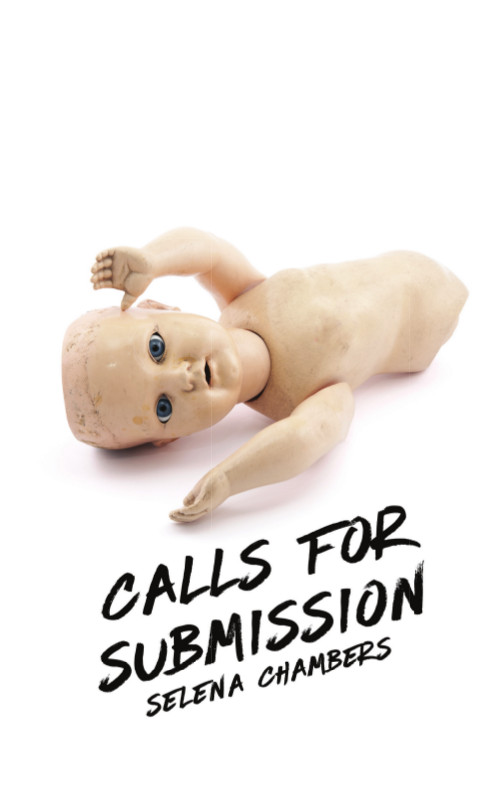 Calls for Submission is my debut collection from Pelekinesis. It features 15 of my very best short stories, including “The Neurastheniac,” which was nominated for a World Fantasy award last year. There’s Steampunk, Decopunk, Poepathy and Lovecraftiana, weird historical fiction, and straight up Gothic horrors with punk rock twists. Oh, and a lot of ladies.

The title summarizes the collection’s mission statement:  to examine the microcosmic horrors of identity, existence, and will in the face of the world’s adamant calls for submission. It’s also a double entendre as every story in this collection was written for specific editors. While it is easy to loose your mission in doing work for others, I actually found mine, and so this collection also demonstrates how I developed and subverted genre’s calls to submit.

Having said all that, my favorite bit has nothing to do with a story. It’s the dedication page:

“To the Babes: Kat, Lori, Michelle, and Maureen. You all inspired me to pick up the axe, and when that didn’t work out, the pen.”

Babes in Toyland is a punk rock band formed in the 1990s. They produced a total of five studio albums, To Mother, Spanking Machine, Fontanelle, Painkillers, and Nemesisters. They promoted other girls to pick up guitars and get behind the drums, and when girls like me grew up, they inspired other modes of expression, like horror stories.

I was around 12-years old when I first encountered them. I was browsing in the record store and Painkillers had just come out. The cassette caught my attention even though I had no idea what they sounded like. I knew Sonic Youth and Nirvana liked them, so they were probably cool. The endorsements weren’t what made me blow my allowance on the EP, though. It was the Cindy Sherman cover:  a propped baby doll posed in such a way that it appeared its head was that of a grotesque clown mask. Totally messed up!

Broken dolls would be a major aesthetic motif of the band. Front person Kat Bjelland even crafted an entire fashion around it. With blunt bangs barely held together with plastic toddler barrettes and vintage baby doll dresses, she sported a seminal look that would become known as Kinderwhore, and presented a demented domestic look that would be completely shattered when she took the stage with her Rickenbacker.

I was really interested in disassembled dolls back then, having mutilated a few of my own and displayed them in my room to my parents joy. It was an aesthetic pretty easy to indulge in as it was a popular motif among bands at that time. But none of them did it like this. This was about deconstructing womanhood. As I intuited this on a very basic level, my big philosophical question became: “What do you suppose this sounds like?”

Trying to describe what it was like hearing Babes in Toyland for the first time has me stumped. I’m past deadline now trying to get it right. But how do you describe an auditory tornado? Steam roller riffs, skull hammering beats, and the Banshee-Siren maelstrom of Kat Bjelland screaming, swearing, pleading and bleeding all over the studio? Distortion and discord parting and mingling with fragile melody and lyrics hardened by wit and irony to hide the vulnerable, gooey uncertainties in the middle? Ugh, doesn’t even come close, but it’ll have to do.

Everything—from the soft surrealist lyrics, to the single-worded album names to their dumpster baby doll imagery—both suggested and destroyed the notion of femaleness. It was this double-edged femininity I’d continue to be drawn too and utilize to express my own art. It was like all the anger, confusion, frustration, and ambivalence I felt had became justified because these women knew it too. Maybe others did—maybe this was actually pretty normal?

As a grew up, the influences became more implicit and subconscious.

At 24, when I decided I wanted to explore horror in my work, I was driven by a notion to explore fears of the feminine. The examples I had were Modernist and Surrealist influences, but I wanted my efforts to be more graphic, and so to help me work out my mission I secretly labeled my type of horror as Foxcore, after the term eventually applied to Babes, and other bands like L7 and Hole.

At 35, while arranging this collection, I found the same aesthetic motif that attracted me to the Babes—broken dolls, lost children, automata, and women who do it for themselves—were all present. An element further driven home by Joan Horne’s Shermanesque cover.

Without not only their music, but their aesthetic, I would have never been introduced to the possibilities of feminine fierceness, artistic fearlessness that have defined my own voice. For all of that, I am eternally grateful, and that is why my favorite bit of Calls for Submission is the dedication. It is a cue to where it all began. Thanks, again, Babes!

Calls for Submission is available from Pelekinesis

Selena Chambers’ fiction and non-fiction have been nominated for a Pushcart, Best of the Net, Hugo, and two World Fantasy awards. Writing as S. J. Chambers in 2011, she co-authored the critically-acclaimed and best-selling The Steampunk Bible with Jeff Vandermeer (Abrams Image), but has since eschewed the initials. Her debut fiction collection, Calls for Submission, is now available through Pelekinesis. You can find out more about her work and happenings at www.selenachambers.com or on Twitter at @basbleuzombie.