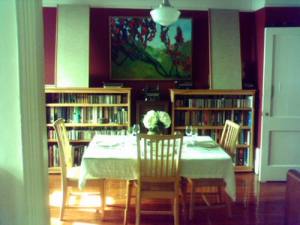 I had promised the folks who helped us move in that I would cook them dinner. Last night we had the first of our guests, Jodi and Sam. This is the first time I’ve entertained in the apartment so I wasn’t sure how it would go. I was also a little frazzled from the cart adventure. On top of this, we were getting ready for Rob’s trip out of town, so he had packing to do.

After some thought, I decided to go all out and serve the meal in courses, so I could really test our set-up. The kitchen cart, by the way, is worth all thirty blocks in the rain. It makes the space so much more workable. Up to this point, I’d been frustrated because the prep area is at the other end of the kitchen from the stove with the refrigerator between, so I couldn’t keep an eye on anything cooking. This is much better.

We started with negronis, which I think Rob wanted to make, in part, because he will be around copious amounts of wine at IPNC this weekend. I had some good olives and two local cheeses, blue and cave-aged cheddar. Sam has a list of food allergies which is fairly impressive and totally fuels my desire to have a challenge when cooking. No gluten, tomato, potato, peppers or eggplant. It’s normally fine but I could not find any gluten free bread. It was very aggravating. I found a source today, of course.

The rest of the menu:

The only real failure was the garlic spears. I love these sauteed in olive oil; they remind me of garlic flavored asparagus. Wonderful. However, these were spectacularly woody. I mean. Really. Spectacular. We could not cut them with a knife. Chewing was possible, but only with heroic efforts. The flavor was still good, but only at a great cost. 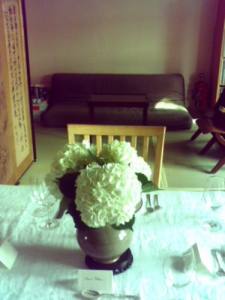 We still have work do on the apartment. Jodi and Sam were very gracious about the fact that our futon is still on the floor. (The frame comes next week) For all that, the evening felt very comfortable. It also soothes me considerably to be able to entertain. It’s part of my nesting impulse. I enjoy cooking. I like having people over.

I spent so long on tour, that I think I don’t really believe a place is mine unless I can invite people over. For the past several months, while things were in boxes, I stopped feeling like the house in Portland was mine. It became a tour location. Know what I mean? So I now finally feel like I live here.

Of course, in a complete paradox, I now also feel homesick because Rob got on plane to go back to Portland for ten days. le sigh.

Here’s the last of the dining room photos, just because. 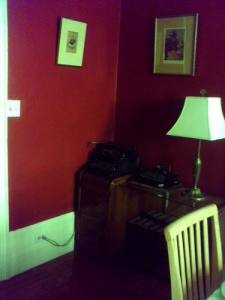