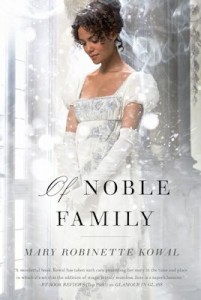 For Of Noble Family, I made the dress on the cover of the novel from a sari. I’m extremely proud of my work on that, because it’s historically accurate and also that entire thing is handsewn.

It also is an excellent metaphor for cultural appropriation.

I took a perfectly good, and beautiful Indian garment, cut it apart, and made it into a British dress. I literally took one culture and remade it into another. The thing that makes this dress special is all the beading and embroidery that some unknown, and probably underpaid, Indian artist did but I get the credit for it.

Without that embroidery, it’s just a basic little white dress.

Now, I did a ton of work deciding how to incorporate the patterns. I did some hand beading to try to link the Indian work more fully into the British aesthetic. I’m proud of the work that I did.

And that doesn’t change the fact that what makes this dress special is still someone else’s work.

So then the question becomes… should I make the dress?

If the sari were a historic museum item? Absolutely not. Cutting it up would be a tragedy.

If it were a factory produced sari and one of thousands? Of course! Cutting it up is no big deal.

The sari in question was somewhere in the middle. Hand-beaded, but contemporary.

Should I make the dress?

The reason that cultural appropriation is so confusing is because there’s a giant spectrum of ways in which we interact with other cultures.

Ultimately, I decided to do it, and to make sure that when I’m complimented I always point to the existence of the artist who did the beading, even if I don’t know their name. I try very hard not to take credit for work I didn’t do. But… I still destroyed the sari.

Someone is likely to say, “But Mary! When you write a story, you aren’t cutting up anything material!”

First of all… this is why it’s called a metaphor.

Second… Are you still taking credit for someone else’s work? Or are you acknowledging the original culture?

Third… It is completely possible for cultural appropriation to supplant an original culture. If the re-imagined narrative becomes the dominant narrative in people’s minds, then that can ultimately erase the originating culture. The more marginalized a culture is, the more likely it is that this damage can happen. I mean… just think about the pagan origins of various Christmas traditions.

The point of all of this is, that when you are sitting down to work on something and you are incorporating elements from cultures that are not your own, think about what damage you might be doing . Are you looking at a cultural element that is sacred? Is there anything special about your idea, beyond the originating culture? Are you giving credit to the original culture?

Should you make the dress?

7 thoughts on “A textile metaphor for cultural appropriation”