Marie Brennan is joining us today with her novella Cold-Forged Flame. Here’s the publisher’s description:

The sound of the horn pierces the apeiron, shattering the stillness of that realm. Its clarion call creates ripples, substance, something more. It is a summons, a command. There is will. There is need.
And so, in reply, there is a woman.

At the beginning?no?at the end?she appears, full of fury and bound by chains of prophecy.

Setting off on an unexplained quest from which she is compelled to complete, and facing unnatural challenges in a land that doesn’t seem to exist, she will discover the secrets of herself, or die trying. But along the way, the obstacles will grow to a seemingly insurmountable point, and the final choice will be the biggest sacrifice yet.

This is the story of a woman’s struggle against her very existence, an epic tale of the adventure and emotional upheaval on the way to face an ancient enigmatic foe. This could only spun from the imagination of Marie Brennan, award-winning author and beloved fantasist, beginning a new series about the consequences of war?and of fate.

Cold-Forged Flame is the first in a new series by Marie Brennan. 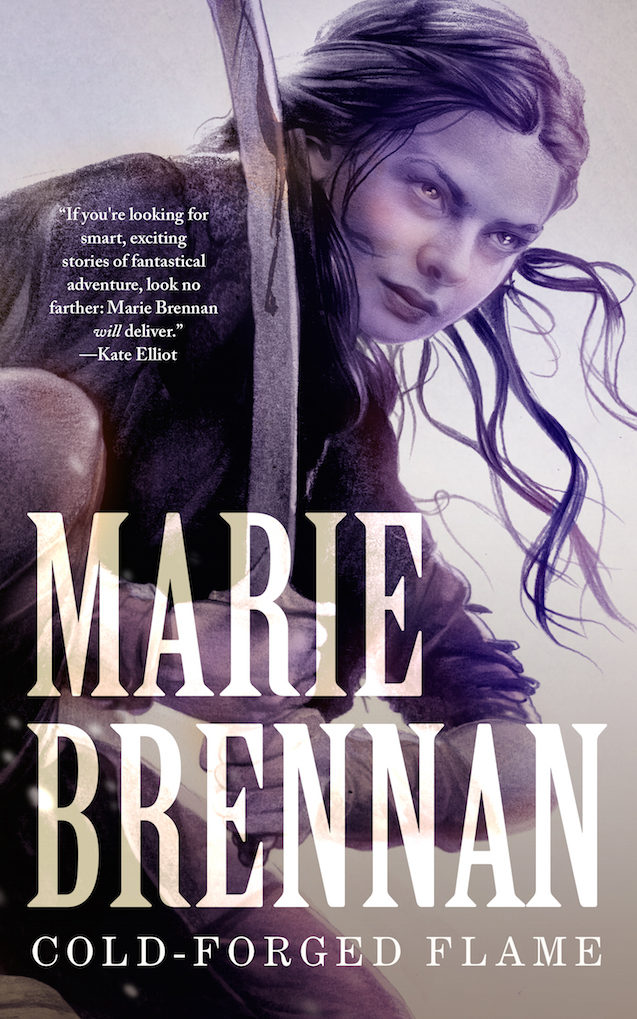 I haven’t made any secret of the fact that the protagonist of Cold-Forged Flame, my new Tor.com novella, is based on a character I played for four years in a LARP. But actually, her roots go back even further than that — to a tent on a hillside in a rural corner of Wales, where Alyc Helms (future author of The Dragons of Heaven and The Conclave of Shadow) and I were working on an archaeological dig together. There’s not a lot to do at night when you’re living in tents on a hillside in a rural corner of Wales, so Alyc and I decided to combine her knowledge of the RPG Changeling: The Dreaming with my recollection of the tabletop mechanics for World of Darkness games and play a mini-campaign, roping in a couple of our friends on the dig. The whole thing was held together with chewing gum and string — Alyc didn’t really remember the Changeling magic system, and we had to use packs of cards in place of dice — but the character I created for that little ad-hoc game stayed with me, and wound up being ported into the LARP Alyc co-ran a few years later in grad school.

The skeleton of the game itself stayed with me, too. Cold-Forged Flame is substantially changed from what we played on that dig; the novella isn’t set in the real world, my protagonist isn’t a faerie, she isn’t part of a whole group on a quest, there’s no prophecy about what they’re doing, and so on and so forth. The character you’ll meet in the novella comes from a different place, fights different battles, meets someone who was never in the game. But if you excavate very carefully, the bones are still there, buried underneath: a journey across a strange island to a cave and a cauldron full of blood.

And that’s where you’ll find my favorite bit. We never actually finished the game, not properly; the dig was a field school, a place where baby archaeologists go to learn how to dig, and in the last two weeks we had to write papers, which takes up a lot of time when you have to do it all with pen and paper. But I hate leaving a story incomplete. So one night — our one night a week where we got bused into the nearest town — Alyc and I sat in the corner of one of the town’s three pubs and talked through the ending of the tale. That’s where we came up with the seven steps that are the climax of this story: a journey so small as to be insignificant, and so huge as to change my character’s life forever.

Those seven steps are where I figured out who she really was. The character who grew out of that moment has a powerful enough hold on my memory that, fourteen years later, when I went to work on this novella, I wrote seven thousand words in a single evening. Because once we were inside that cave, there was no stopping short of the end.

The end of the novella, that is. It isn’t the end of the story. That continues next spring, with Lightning in the Blood — and, sneak peek, my favorite bit of that one is front and center in the cover art!

Marie Brennan is the World Fantasy Award-nominated author of several fantasy series, including the Memoirs of Lady Trent, the Onyx Court, the Wilders series, and the Doppelganger duology, as well as more than forty short stories. More information can be found at www.swantower.com.