That thing I said in the previous post about not really having to deal with sexual harassment at conventions? That’s true. But– but I still deal with the societal baggage that goes with it. For instance — I know who Elise was reporting and I know that because I fielded another complaint about the same editor.

So why aren’t I naming him?

These are events with witnesses. He has a reputation. This isn’t a case of it being a one time thing.  So why am I afraid to say his name out loud?

Here are some of the reasons:

So while I’m telling people to stand up for themselves, and make reports — while I know that reports have been made in the past — I’m using my inside voice. I haven’t been directly harassed, and yet I am afraid. I am letting all of that power frighten me into being silent and complicit in allowing this person’s behavior to continue.  My silence. Mine. Yours. That is what allows this to continue.

This is the power of sexual harassment and how it affects everyone you know.

The editor that people have reported is Jim Frenkel.

EDITED TO ADD: On July 11, 2013 Patrick Nielsen Hayden reported on Twitter that “James Frenkel is no longer associated with Tor Books.” 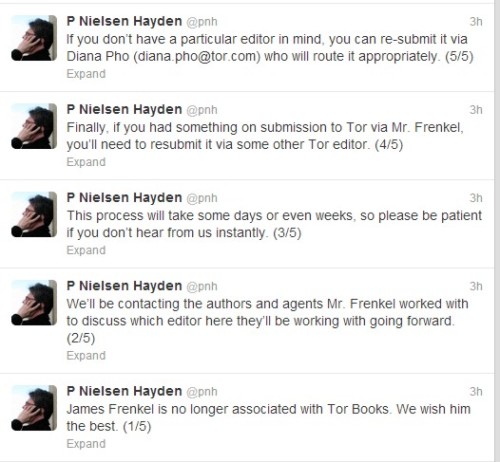