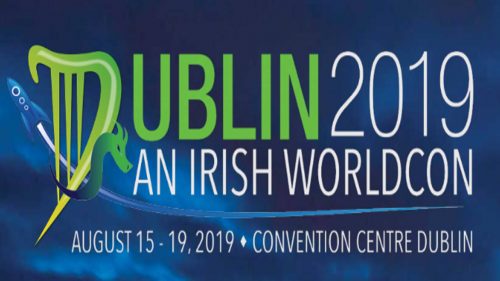 Mary Robinette will be at Dublin WorldCon and the Hugo Awards from Aug 15 to 18, 2019, in Dublin, Ireland. The Calculating Stars has also been nominated for a Hugo Award for Best Novel. Get memberships here.

Here’s where to find Mary Robinette at the con:

The Regency period in the UK, the time of the Napoleonic wars in most of Europe, has long been a rich source of inspiration for fantasy novels – including Naomi Novik’s Temeraire series and Susanna Clarke’s Jonathan Strange and Mr Norrell. How has the Regency been used as an inspiration for fantasy writing? Why does this period in particular have such an abiding appeal?

What is SFWA and What Can It Do For You?
4:30pm
Stratocaster BC (Point Square Dublin)

Join past and present SFWA volunteers, board members, and staff to learn about the Science Fiction and Fantasy Writers of America and what it has to offer genre writers – including model contracts, its grants programme, its Emergency Medical Fund, the Writer Beware website, the Nebula Awards Conference, the SFWA blog, and more.

Getting men on the Moon was certainly an achievement, but it is nearly 50 years since anyone was there and the Apollo launchers, unlike Soyuz, have been abandoned for years. Beyond the obvious spectacle, was Apollo all for nothing? Was the spectacle itself enough? Panelists consider the legacy of Apollo.

ow creatives from different disciplines take a common concept and explain how they would approach from their respective fields.

Join our panel of authors to discuss the ups and downs of writing with an animal companion. Do dogs or cats make better familiars for authors? What do you do when your pet is more popular on social media than you are? There will be pet pictures!

Watch Mary Robinette ad lib to a set of slides she has never seen before!

The books we read in childhood often have a lasting influence. In this panel, finalists for the Hugo Award for Best Novel discuss the books that had a profound effect on the people they became. How did these works change them? Was this influence a good or a bad one? Is there a book they think everyone should read at least once in their life?

The Hugo Awards are the most prestigious award in the science fiction genre, honouring literature and media as well as fan activities. Dublin 2019 administers the 2019 Hugo Awards and the 1944 Retro Hugos. This also includes the Lodestar Award for Best Young Adult Book, and the John W. Campbell Award for Best New Writer.

Mary Robinette’s The Calculating Stars (Tor) has been nominated for Best Novel.

Puppetry crosses genres and media, bringing together physical art, storytelling, and live action from a small cardboard production stage to the silver screen. So, what are the nuts and bolts of puppetry production? From original concept to final performance,our panel of experts share their advice, experiences, and stories about bringing puppetry to life – no strings attached.