I am absolutely delighted that Audible.com is producing the audio books for my Glamourist Histories. The audiobook of Glamour in Glass is out today and you can listen to a preview of it on audible.com — well, and you can buy it there, too, but the preview is the bit I want to talk about now. 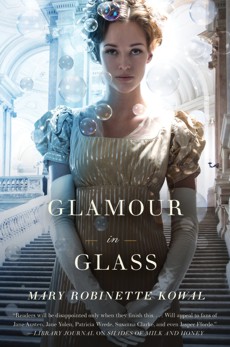 If you listened to the audiobook of Shades of Milk and Honey you know that I recorded the entire book with a RP British accent. I had a dialect coach in the room the entire time and recorded at about half the speed I normally do. For Glamour in Glass, Audible asked me to go with my natural speaking voice because if an author is going to record their own book, then they should actually sound like the person they really are.

But. But there’s a funny thing that happens, which is that there are places where you can hear the fact that I grew up in the South. Now, I’ve never had a strong Southern accent, but there are still markers in my voice. One of the chief of those is that I pronounce “pin” and “pen” the same unless I’m thinking about it. It’s sometimes hard for me to hear the difference between the two sounds.

At about the 11:40 mark, in the sample, I start a sentence which includes the phrase that sounds like, “through the tinted hall,” even to my ear. On the page, however, it’s written as “through the tented hall.”

Homophones are one of the dangers of going from the page to audio. I do read everything aloud, but because “tint” and “tent” are not that different in my ear, I didn’t hear the difference until I was listening to the preview without having the words in front of me.

So, go over, listen to the clip and, if you are so inclined, pick up the audio book of Glamour in Glass.

2 thoughts on “The audiobook of Glamour in Glass is out at Audible.com!”