I woke up during the night with a toothache, which was Just Not Fair. At all. I tried sleeping anyway, I tried taking ibuprofen. Nada. In fact, it got worse, radiating through my ear and sending shafts of steel straight through my brain and out the top of my head. Visions of root canal opened in my head.

So, I got up around four and called my dentist’s office, leaving a fairly pathetic voicemail asking them to call me when they got in and make the pain go away.

At 8:05, five minutes after they opened, Angela called and sounded so sympathetic on the phone that I knew I was doomed. They got me in with an immediate appointment. Definitely doomed.

I walked in and apologized for being ill and the technician’s eyes lit up. “Sinuses?” she said.

I nodded, “And a cough. Sorry about that.”

“I have three kids, it’s not a problem.” She went to the computer screen. “So tell me what’s going on.”

“Well, about three days ago, I woke up and my jaw hurt. I thought ‘Jeez, have I been clenching my jaw.’ But then last night it got worse and woke me up.” I proceeded to describe those symptoms. “It hasn’t been as bad since I got up.”

“But the pain medication didn’t do anything?”

“It kept getting worse.” 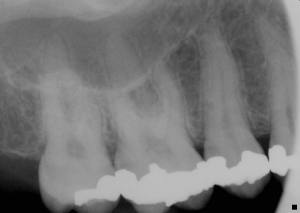 “Let’s get an x-ray and see what’s going on there.”

She worked really fast, remembering that I have a hair-trigger gag reflex, and got the image up on their nifty computer screen. Then the doctor came in. She was quickly caught up on my symptoms and then looked at the x-ray.

“See that thin white line dipping down across the roots of your teeth?” When I nodded, she continued. “That’s your sinus cavity. It’s pressing down on your nerves. We’ll go ahead and test to make sure that it’s not a dental issue, but I think you’re looking at a sinus infection.”

She poked, prodded, stuck cold things on my teeth and everything was normal. Yay! No root canal. (By the way, thank you to Angela and Brandi at Laurelhurst Dentistry who sent me my xray.)

So then I trotted off to the doctor and repeated my symptoms. He shook his head, “I am exactly the right doctor for you to see because I am three weeks ahead of you with these symptoms. So I know that the first line antibiotic does nothing on this particular strain. Which means that you don’t have to spend five days wondering why you aren’t getting any better. What you have is the flu that’s going around plus a secondary infection.”

I somehow got to this point in my life without ever having had a sinus infection, ear ache or toothache. At the moment it feels like I have all of them.

I now have antibiotics. I’m armed with the knowledge that lying down will make the pain worse. That part of the symptoms with this is that it doesn’t respond to pain medicine, so I won’t bother trying. And, that the antibiotics will have no affect the flu portion of the illness, but in a couple of days my head won’t hurt.

The important thing is that I don’t have to have a root canal. On the whole, that alone makes it a good day.

7 thoughts on “Teeth, Sinuses and Me”