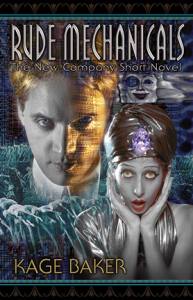 Subterranean Press is proud to present its first audio-book, Rude Mechanicals, a short novel in Kage Bakerâ€™s signature series recounting the adventures of the time traveling cyborgs of Dr. Zeus incorporated. Rude Mechanicals is read by Mary Robinette Kowal. You can order a hard copy here.

The year is 1934, the scene is a Wood Near Athens â€” temporarily relocated to the environs of the Hollywood Bowl, as German theater impresario Max Reinhardt attempts to stage his famous production of Shakespeareâ€™s A Midsummer Nightâ€™s Dream.

Fortunately for Reinhardt, he has immortal assistance in the person of Literature Specialist Lewis, a cyborg working undercover for Dr. Zeus Incorporated, masters of time travel. Lewis is tasked with preserving Reinhardtâ€™s promptbooks for future Company profits at auction.

Unfortunately for Reinhardt, there are complicationsâ€¦

For Joseph, Lewisâ€™s fellow cyborg, is on the case as well, attempting to salvage a botched mission of his own. It involves the lost treasure of the Cahuenga Pass, a missing diamond, a third-century pope, burglary, disguises, car chases, and a legendary Hollywood party spot. All of which interact, more or less disastrously, with Lewisâ€™s mission and Reinhardtâ€™s Shakespearean extravaganza. Will the show go on?