One of the things I have most enjoyed about the Month of Letters Challenge is the mail that my character Jane gets. It has been not only fun, but actively helpful to write letters in her voice.

One of my readers just posted about receiving the response to her letter.

Check out this awesome thing I just got in the mail! This is a letter from Jane Vincent, heroine of Mary Robinette Kowal’s Glamourist Histories. I’ve been working on getting material together to make a copy of a ball gown Jane wears in the first book (Shades of Milk and Honey, which you need to read RIGHT NOW because it is a Jane Austen novel with magic and you need it in your life), so I wrote her as part of A Month of Letters Challenge to tell her how much I admired it. She sent back swatches! Betsy Haibel practically had to peel me off the ceiling. Now I have something to try to match to when I do my dye tests!

You can see the letter and the fabric swatches at Annalee Flower Horne’s Google+ post “Check out this awesome thing I just got in the mail!” 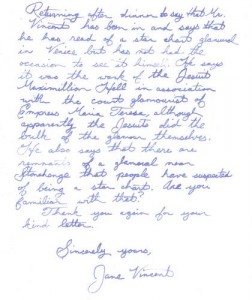 What has been nice about this as a writing exercise is that readers ask me questions about the Glamourist Histories universe that I sometimes hadn’t considered. One letter writer asked about using glamour to make star charts.

Well… duh. Of course they would have. It would have been freaking difficult, because the strands would have been so long and delicately placed, but of course someone would have.  So I hit the internets, found a Jesuit priest in Vienna who would have had the resources through his order and the patronage of Empress Maria Theresa, and had Jane write back about that.

Will this appear in a future book? Probably not because I’ve got no plans to send them to Vienna, but just knowing that such things exist makes the world richer and allows me to think of other areas in which glamour would be employed.

In Shades of Milk and Honey we only saw glamours uses in the drawing room, because that is the scope of a Jane Austen style plot. But glamour is like paint or needlework. No one who reads a Jane Austen novel looks at the Lady Betram sewing or Emma painting and thinks that is the only place where people use those skills. I knew of other practical uses for glamour, but the stars… No, that was not one of them.

It has been, as I’ve said, great fun, and unexpectedly helpful.

1 thought on “Sending letters as Jane”