There are two magazines that I’ve been art director for, Shimmer and Weird Tales. I was so honored when Stephen Segal tapped me to be his successor on the Weird Tales staff. I mean, he’s the art director who was responsible from revamping and updating the Weird Tales look in conjunction with editor Ann Vandermeer’s groundbreaking editorial vision. They won a Hugo for their work and with good reason. 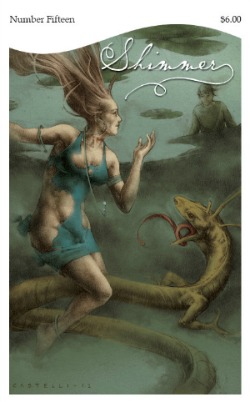 I was proud of working for Weird Tales. But when I saw Marvin Kaye’s decision to republish a racist novel in the next issue, and his defence it as “A Thoroughly Non-Racist Book” I was appalled. It used to be a gold-standard in unconventional spec fiction. I saw authors pulling their stories and wanted to cheer and weep at the same time. Cheer, because people are taking a stand against racism. Weep, because there were good stories without a home.

Now… since this morning, the publisher has overruled Mr. Kaye and they will not be reprinting the novel.   I am very, very glad to see that. But in the span between those two posts, I got pissed and decided to try doing something productive.

So… I contacted Beth Wodzinski, the editor-in-chief, at Shimmer.

Shimmer is a small press magazine.  Our tagline was “Speculative fiction for a miscreant world.” It is a beautiful digest sized magazine and is currently art directed by the talented Sandro Castelli. It publishes stories that are dark, strange, funny or all three. I remain proud of Shimmer and still subscribe although it’s been years since I was directly involved.

When we started the magazine, we paid $5 per story with the goal that someday, someday we would pay pro rates.

That day is today.

As Beth says, “Even without publishing the overtly racist chapter of Victoria Foyt’s novel Save the Pearls, it’s pretty clear that Weird Tales is no longer interested in publishing the kind of beautiful, dark, and original fiction that I adore — and the vocal outrage from the entire speculative fiction community shows that we are not alone in loving these stories.”

Shimmer already paid .03 per word. Starting with the next issue, I am under-writing a rate increase to .05 per word — SFWA minimum pro rates. I don’t have time to edit, or art direct, but by God, I can make certain that there is a good home for all those weird tales in a magazine that has always, always made me proud.

The Shimmer submission guidelines are here or you can subscribe, here.