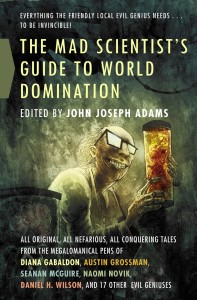 I recorded some of the audio for the new anthology Mad Scientist’s Guide to World Domination, edited by John Joseph Adams. I also wrote a story for it called, “We Interrupt This Broadcast” which is in my punchcard punk universe. Chronologically, it takes place before “The Lady Astronaut of Mars” but the two stories only have a slim thread connecting them.

In addition to my story, I also recorded several others and loved all of them. What I thought you would be interested in seeing is the recording script that the engineer used while we worked. For that, I grabbed mine because I didn’t need permission. It was just easier, but the one for Genevieve Valentine’s is funnier because there was a sentence that I could not get through without laughing so there are a bajillion restart marks in a tiny cluster.

When you are looking at the page below, you’ll see two types of marking. The numbers are the timestamp on the recording. We are one hour, nineteen minutes, and twenty-two seconds into the project by the time I recorded mine. Now, that time does not represent where the audio lands in the finished anthology, just where we were for the stories I recorded.

The other marks, the ones that look like backward Ls are where I stopped. Usually because I stumbled on a word, occasionally because I didn’t know how to pronounce something. 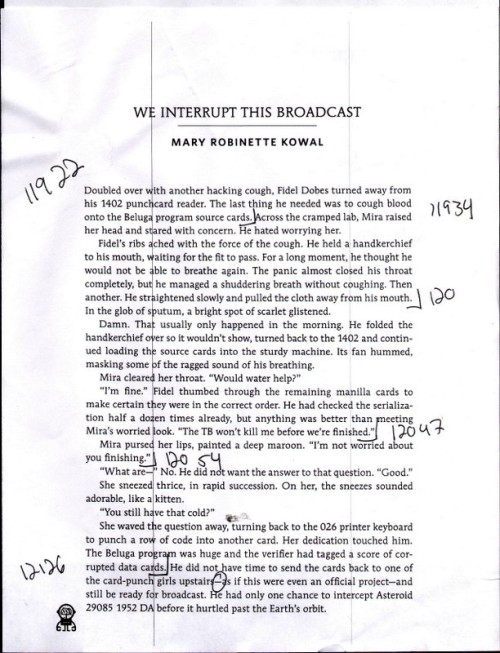 What’s particularly fun about an anthology like this is the wide range of stories. I enjoy trying to find the character of each and these are very different in tone from story to story. People often ask me if it’s easier to record my own stuff or someone else’s. It’s a toss-up. On the one hand, I know exactly what my character’s motivations are. On the other, I’m self-conscious and second-guessing my own writing. It’s hard to turn off the author brain, which will occasionally go, “You wrote that?” At the same time, my writing matches my own rhythms so once I get into the zone I’m less likely to trip. It’s a tough call about which is harder, if either.

What do you think? You can hear me read:

. Or swing by the official website for samples and the complete table of contents.