I have been eagerly awaiting the film Belle, which is based on the life of Dido Elizabeth Belle. She was the illegitimate daughter of a British Navy Captain and a slave, raised alongside his white daughter. I swung by IMDB to check out the costumes — so pretty.

I also happened to notice this photo. Please note the actresses named. Those would be the four white wealthy women. Not the servant, which… okay, leads versus background actors, I can see that.

But also not Gugu Mbatha-Raw, who plays the title character. 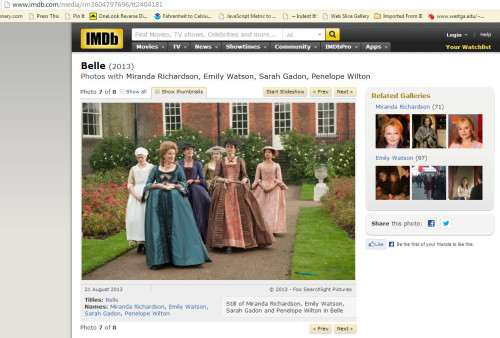 Also the cast photos of people out of costume… no picture of the lead? Hm.