Peter James is joining us today with his novel Absolute Proof. Here’s the publisher’s description:

Investigative reporter Ross Hunter nearly didn’t answer the phone call that would change his life – and possibly the world – for ever.

‘I’d just like to assure you I’m not a nutcase, Mr Hunter. My name is Dr Harry F. Cook. I know this is going to sound strange, but I’ve recently been given absolute proof of God’s existence – and I’ve been advised there is a writer, a respected journalist called Ross Hunter, who could help me to get taken seriously.’

What would it take to prove the existence of God? And what would be the consequences?

This question and its answer lie at the heart of Absolute Proof, an international thriller from bestselling author Peter James.

The false faith of a billionaire evangelist, the life’s work of a famous atheist, and the credibility of each of the world’s major religions are all under threat. If Ross Hunter can survive long enough to present the evidence . . . 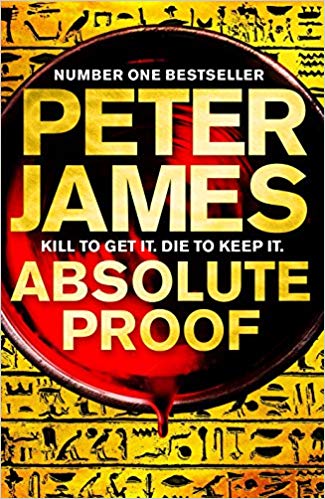 My favourite bit of my novel Absolute Proof, is Chapter Eight, in which my central character, investigative journalist Ross Hunter, gets the phone call that I did actually get out of the blue, one afternoon, that resulted in this book, the one I am most excited about of everything I’ve written.

Almost 30 years ago, back in 1989, the phone rang, one afternoon.  An elderly sounding gentleman asked if I was Peter James, the author.  Hesitantly, I said I was.

‘Thank God I’ve found you!’ he replied. ‘I’ve called every Peter James in the phone book in the South of England, it’s taken me two weeks. My name is Harry Nixon, I assure you I’m not a lunatic, I’m a retired academic, and was a pilot in Coastal Command during the War.  This may sound extraordinary, but I’ve been given absolute proof of God’s existence, and I’ve been told, on the highest authority, that you are the man to help me get taken seriously.’

If it wasn’t for the fact that he sounded so genuinely sincere, I might have hung up on him, but there was just something about this that intrigued the writer in me.  ‘May I ask who exactly recommended me?’

‘Well I’m sure it will sound strange, but I can assure you it was a representative of God.  Please hear me out.’

He was right, it sounded mighty strange and far-fetched.  But I let him continue.

He told me he lived in the Midlands and that his wife, also a former academic, had recently passed away from cancer.  Before she died, they made a pact that he would go to a medium to attempt to communicate with her, as proof of life beyond death.  Some while after her death, he dutifully did this, but instead of a communication from his wife, a male claiming to be a representative of God came through.

He told Harry Nixon that God was extremely concerned about the state of the world, and felt that if mankind could have faith in Him reaffirmed, it would help steer us back onto an even keel.  As proof of his bona fides, God’s representative had given him three pieces of information no one on earth knew, all of them in the form of compass coordinates:  The first was the precise location of the tomb of Akhenaten, uncle of Tutankhamun and the first monotheist of the pharos. The second was the location of the Holy Grail. And the third was the location of the Ark of the Covenant.

I asked him if he had checked any of these out and he replied, excitedly, that he had indeed.  ‘I can’t tell you any more over the phone, Mr James, I need to come and see you.  I’m going to need four days of your time.’

I told him that was a pretty big ask!  I said I could spare him half an hour for a cup of tea and if he could convince me we needed longer, we’d take it from there.  We made an arrangement for him to come down the following week, at 4pm.  I thought that would be a safe time, as my wife would be home from work at 5.30, and if he had me in headlock, she’d be able to assist!

On the nanosecond of 4pm the following Tuesday, the doorbell rang.

Standing there was a man in his seventies, holding a large attaché case, who had the air of a retired bank manager.  He was dressed in a neat suit, with matching tie and handkerchief and looked at me with sad, rheumy eyes.  ‘Thank you for seeing me, Mr James,’ he said, shaking my hand and holding my gaze.  ‘You and I have to save the world.’

I made him a cup of tea and sat down with him in the living room.  ‘So where do we start?’  I asked him.

He opened his case and removed a manuscript, hundreds of pages thick, bound with an elastic band.  ‘We start with you reading this, please.’

I glanced at it, it looked about 1,000 pages long, typed with the pages covered in handwritten annotations.  ‘Sure,’ I said, ‘Leave it with me.’

He shook his head.  ‘I cannot let this out of my sight – this was channeled to me directly from God, through his representative.’

‘So Mr Nixon, you are going to sit there, in that chair, watching me sitting here, reading it all the way through until I’ve finished?’

‘This would take me four days!’

Excitedly he retorted, ‘See, I told you so!’

I replied that either he took a massive leap of faith and left it with me, or he took it back home with him after his cuppa, but there was no way he was going to sit in my home for four days!  ‘And, before anything else, could he now answer my question over the phone about whether he had checked out any of the coordinates.

He replied he had indeed.  Using his skills learned as a pilot in the War, he now had, so far, the precise location of the lost tomb of Akhenaten in the Valley of the Kings, and the precise location of the Holy Grail.  The Holy Grail, he told me, was at Chalice Well in Glastonbury.  I’d never heard of this place, but I subsequently discovered this wasn’t too far-fetched a scenario. Long a holy and mystical site, there is some evidence that Joseph of Arimithea bought the Holy Grail – the chalice used at the Last Supper and to collect Christ’s blood when he was on the cross to Glastonbury and hid it at Chalice Well.

‘I’ve been dowsing and metal detecting there, and there is something under the ground in the exact position I’ve been given,’ Harry said.  ‘Chalice Well is run by a group of trustees – I’ve approached them asking permission to do an archaeological dig at this location but they won’t take me seriously.  But, Mr James, I am sure they would take you seriously.’

Eventually he agreed to leave the manuscript with me, and trundled off into the night.  I settled down to start reading – and after about twenty minutes I began to lose the will to live.  I was wading through page after page of religious tracts, new age diatribes, and barely legible annotations.

I might have simply returned the manuscript to him the next day, were it not for an extraordinary thing that happened and was to change everything.

By sheer coincidence, the following day I had to go to Bristol to do a BBC radio interview for my then latest novel.  When we finished the interview, I carried on chatting for some minutes with the very bright and delightful presenter.  Suddenly, out of the blue, she mentioned Chalice Well.

Coincidences have always fascinated me, and her words send a ripple of excitement through me.  Twenty-four hours earlier I’d never heard of the place – and now it was twice in two days.  ‘What do you know about Chalice Well?’ I asked her.

‘Quite a bit – my uncle’s a trustee,’ she replied.

Astonished and very excited now I told her the story of my encounter with Harry Nixon.  She said she would ask her uncle what he knew about the man.  I left, feeling very strange – not exactly the chosen one but I had the feeling something was going on, and phoned a good friend of mine, Dominic Walker, who at that time was the Bishop of Reading (he went on to become Bishop of Monmouth and is now retired).  I asked if I could come and talk to him.

I should add that Dominic had always struck me as a very modern thinking clergyman, coming from a no-nonsense family – his father was a doctor, his mother a nurse – and he has a brilliant intellect.  Over lunch a couple of days later, I told him the story and asked him what he thought.

He thought about it very carefully and said, ‘I think I would want something more than just three sets of compass coordinates to give me proof of God. I would want to see something that defies the laws of physics of the universe – in other words a miracle, and it would need to be a pretty spectacular one.’

‘OK,’ I replied.  ‘If someone could deliver that, what then?’

‘You know what I really think if someone could deliver that?  I think they would be assassinated.  Because whose God would it actually be?  You have all the different factions of the Anglican, Catholic, Judaic, Islamic, Hindu, Sikh and all the other monotheist religions in utter disarray.  How would China view it or Russia?  Would either of them want a higher power usurping their authority?  What would the impact actually be on the world?’

As I left, I punched the air with excitement, as I realized I had my story right there!  A thriller about a man on the path to discovering absolute proof of God’s existence, up against those who want to stop him, and those who want ownership of it….

Peter James is a UK No. 1 bestselling author, best known for writing crime and thriller novels, and the creator of the much-loved Detective Superintendent Roy Grace. With a total of 13 Sunday Times No. 1s under his belt, he has achieved global book sales of over 19 million copies to date, and has been translated into 37 languages.
Synonymous with plot-twisting page-turners, Peter has garnered an army of loyal fans throughout his storytelling career – which also included stints writing for TV and producing films. He has won over 40 awards for his work, including the WHSmith Best Crime Author of All Time Award, Crime Writers’ Association Diamond Dagger and a BAFTA nomination for The Merchant of Venice starring Al Pacino and Jeremy Irons for which he was an Executive Producer. Many of Peter’s novels have been adapted for film, TV and stage.
His new book Absolute Proof – a stand-alone thriller – which was published by Pan Macmillan on 4th October 2018.