K. A. Doore is joining us today to talk about her novel The Perfect Assassin. Here’s the publisher’s description:

A novice assassin is on the hunt for someone killing their own in K. A. Doore’s The Perfect Assassin, a breakout high fantasy beginning the Chronicles of Ghadid series.

Divine justice is written in blood.

Or so Amastan has been taught. As a new assassin in the Basbowen family, he’s already having second thoughts about taking a life. A scarcity of contracts ends up being just what he needs.

Until, unexpectedly, Amastan finds the body of a very important drum chief. Until, impossibly, Basbowen’s finest start showing up dead, with their murderous jaan running wild in the dusty streets of Ghadid. Until, inevitably, Amastan is ordered to solve these murders, before the family gets blamed.

Every life has its price, but when the tables are turned, Amastan must find this perfect assassin or be their next target. 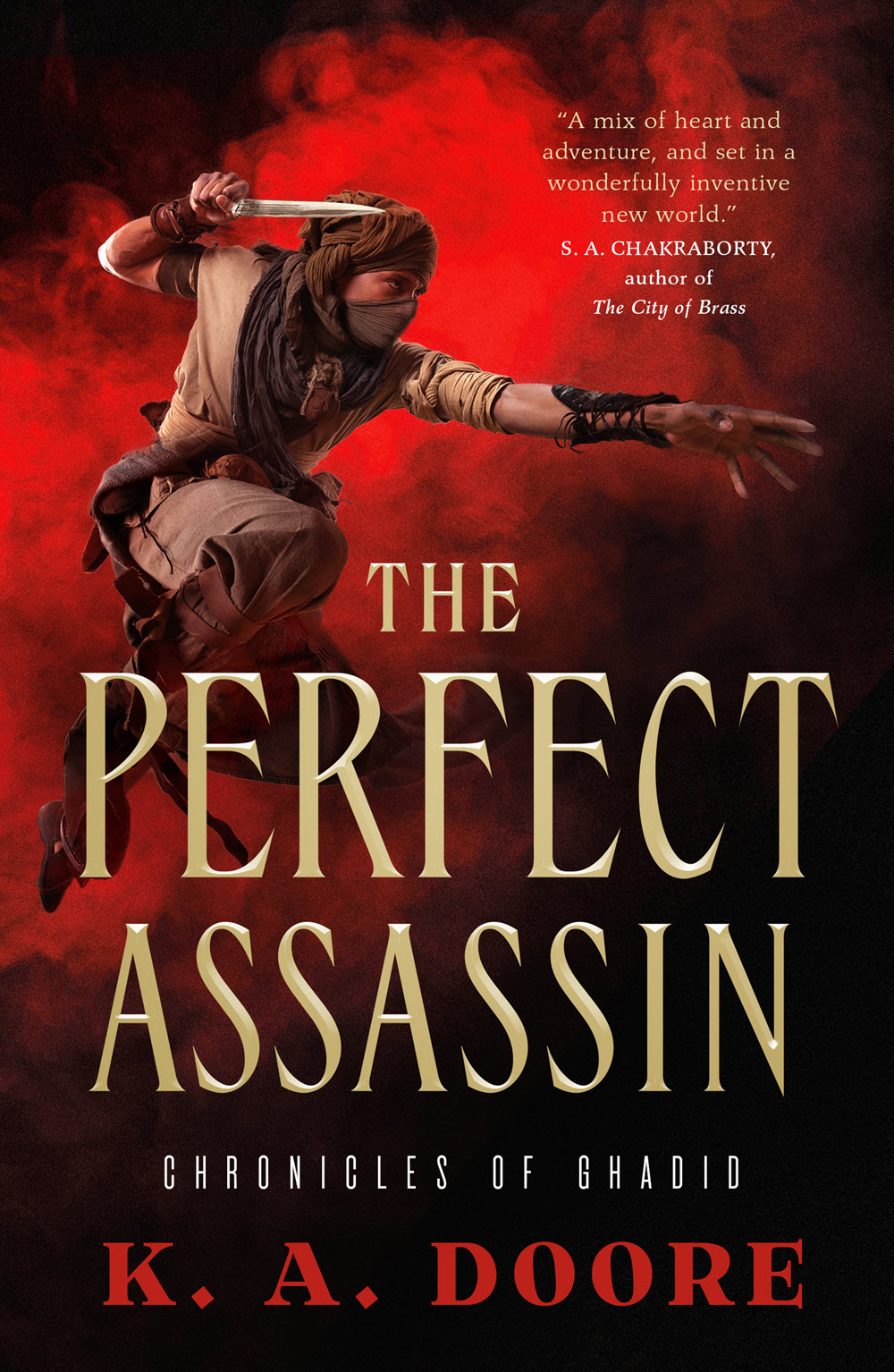 Between all the intrigue, mystery, rooftop fights, quiet contemplation among stacks of scrolls, my favorite bit in writing the Perfect Assassin is:

Okay before you run for the doors, please at least take a sip of water and hear me out. I lived in Tucson, Arizona for six years and it was the quintessential enemies to lovers relationship. We arrived in August, at the height of monsoon season, and it was muggy and awful and hot. August in Tucson is all the sticky, exhausting heat of Florida without a single spot of shade.

Needless to say, I was not impressed.

My second August in Tucson, however, was much improved. And by the August we moved again, I had a newfound appreciation for the dreariest of summer months that I’d never had in all my growing-up years in Florida.

You see, in Arizona there’s this saying: it’s a dry heat. The saying’s been ridiculed and parodied to all out because anything above 90 without a/c is gonna suck, that’s just the truth of it, but there’s a warning embedded in the saying. As if the heat being dry is supposed to make it any easier to bear. As if you should be thankful for that heat. As if it could, in fact, be worse.

Yeah I don’t think anything can really make 120 degrees bearable.

May and June are a long, indrawn breath before the exhalation that is July and monsoon season. But you can’t have one without the other. So I learned to appreciate June’s impressive heat – and I also learned not to go outside after 6am. But that didn’t mean June was dead; far from it. You just had to look for life at night. Then you’d see the bats bursting from beneath the bridges, the coyotes stalking the wash, the javelina nosing their territories, the tarantulas claiming their rocks.

I knew from the very beginning that The Perfect Assassin would be set in a place just as hot and just as dry and just as full of life. I knew I wanted to explore the implications of that heat, the way it’d shift daily life indoors and at night. The way a whole year might be structured around those few weeks when it finally – finally ­– rained. The way a people might distrust, even fear, the water that came from the sky and rely instead on their wells.

I wanted to wrap up everything I’d learned to love about those endlessly dry and hopelessly hot months before monsoon and shove it into a story. And when you’ve got a murderer to apprehend, what better deadline than the very physical and incontrovertible arrival of the storms?

After all, the storms always come.

Throughout the story, the heat has been building along with the tension until finally, both break, leading to one of my favorite bits – both in the story, and in the desert:

The downpour had thinned to a drizzle. Amastan walked slick streets, his wrap growing sodden and heavy once more. Torches glowed like lonely outposts in the gloom, their light dimmed by haze, their glass smeared with condensation. The streets were empty, save for bits of roof and broken glass, but he could hear laughter and loud conversations bursting from homes as he walked by. Occasionally, a child darted out from a door, screaming in delight at the illicit sensation of wet skin, hair, clothes.

But it wasn’t safe to be out in a storm, even its tail end, and so inevitably an adult would run after the child and drag them back inside. Lightning could still strike. A gust of wind could finish the job of tearing a roof apart that the storm had started.

The rain stopped all at once, there one moment, gone the next. The stars blinked through a gap in the thick blanket of clouds. A gentle breeze cooled his skin and closed the opening. For the first time in months, the city didn’t smell like dust. Instead, it smelled alive.

K.A. Doore grew up in Florida, but has since lived in lush Washington, arid Arizona, and cherry-infused Michigan. While recovering from climate whiplash, she’s raised chickens, learned entirely too much about property assessment, photographed cacti, and now develops online trainings. The Perfect Assassin is her debut novel.