Marshall Ryan Maresca is joining us today to talk about his novel A Parliament of Bodies. Here’s the publisher’s description:

Mixing high fantasy and mystery, the third book in the Maradaine Constabulary series follows Inspectors Satrine Rainey and Minox Welling as they track down a dangerous murderer.

The city of Maradaine is vexed by the Gearbox Murders: a series of gruesome deaths orchestrated by a twisted mechanical genius. With no motive and no pattern, Inspectors Satrine Rainey and Minox Welling–the retired spy and untrained mage–are at a loss to find a meaningful lead in the case. At least, until the killer makes his most audacious exhibit yet: over a dozen victims in a clockwork deathtrap on the floor of the Druth Parliament.

The crime scene is a madhouse, and political forces conspire to grind their investigation to a halt. The King’s Marshals claim jurisdiction of the case, corruption in the Constabulary thwarts their efforts, and a special Inquest threatens to end Minox’s career completely. Their only ally is Dayne Heldrin, a provisional member of the Tarian Order, elite warriors trained in the art of protection. But Dayne’s connection to the Gearbox Murders casts suspicion on his motives, as he might be obsessed with a phantom figure he believes is responsible.

While Satrine and Minox struggle to stop the Gearbox from claiming even more victims, the grinding gears of injustice might keep them from ever solving these murders, and threaten to dismantle their partnership forever. 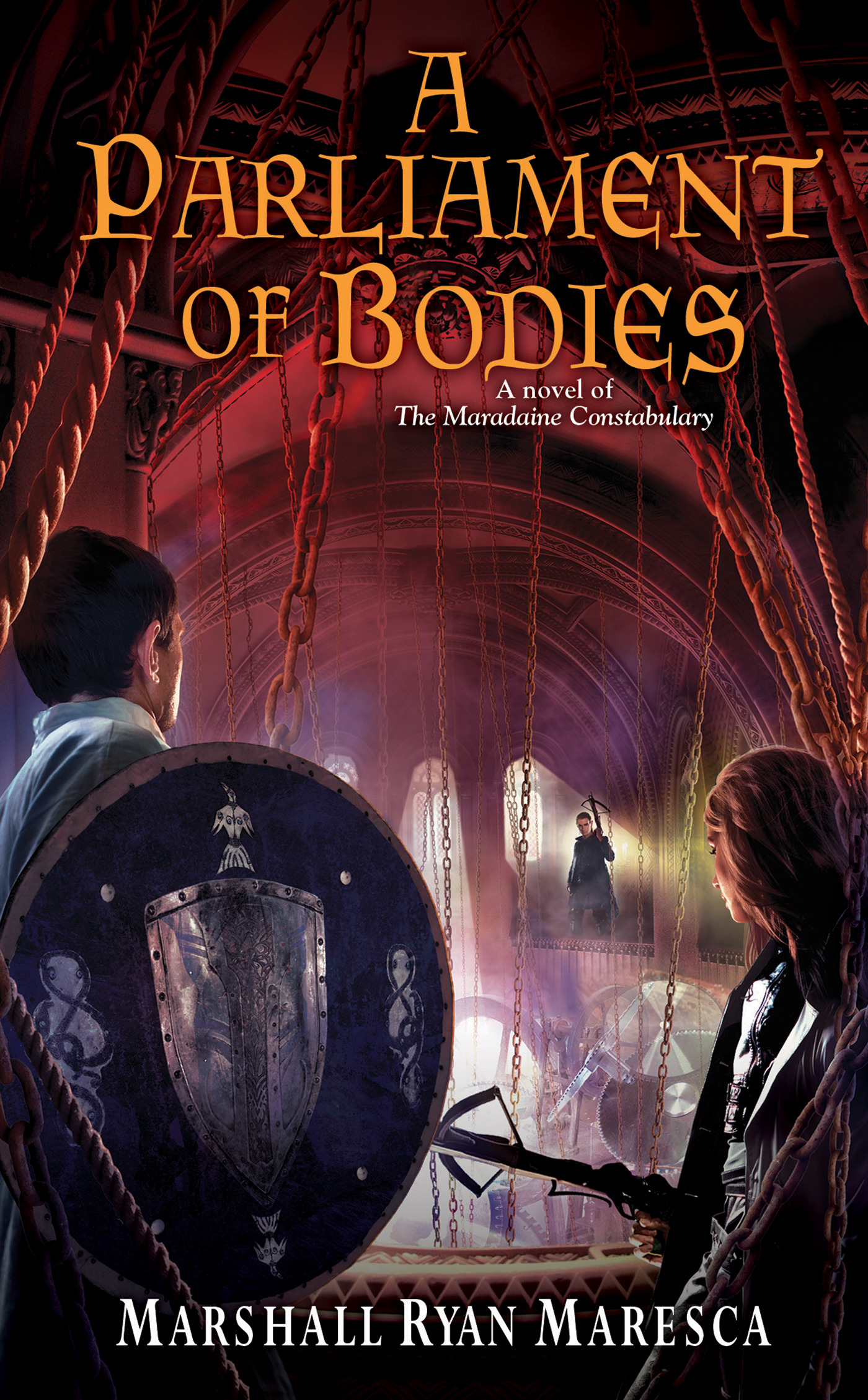 Let’s not mince words: The Maradaine Saga is epic. The latest book, A Parliament of Bodies, is the third book of the Maradaine Constabulary series, but it’s also the ninth book set in the city of Maradaine, and the Maradaine Constabulary is one of four series telling the wider, grander story of that fantastical city. This means I have four sets of protagonists and the secondary characters in their respective orbits, which translates to hundreds of characters that populate the city.

You can’t do that without some favorites emerging.

It’s funny, because two of my favorites were not originally part of my plan, when I wrote the outlines and rough drafts of the first books of their respective series. For example, in the rough draft of A Murder of Mages, Inspector Minox Welling was a loner in all regards, living in a boarding house and largely keeping to himself in all matters outside of his vocation. But I had also implied that he had come from a family with long, deep roots in the Constabulary. In my editing process, I asked myself, “Where is that family?”, and made Minox’s home life radically different, where he now lived in a large house with three generations of extended family.

From that came Corrie Welling, Minox’s devoted, salty-mouthed sister, who served in the constabulary horsepatrol on the night shift. She would be there to ground him when he was pushing too hard, and give him perspective of how he’s seen by the rest of the constabulary, all while still loving him as only a sister can.

Writing her was so much fun that she became an integral part of the cast, and her role expanded in An Import of Intrigue and A Parliament of Bodies.

Similarly, in the first draft of The Way of the Shield, the first book in the Maradaine Elite series, the focus was almost entirely on Dayne, and it wasn’t working. I knew I needed another voice, one with less experience than Dayne who could also serve as a foil, and that’s where Jerinne Fendall, Initiate in the Tarian Order came from. She brought a new energy to that story, and she quickly became another favorite for me to write.

And since A Parliament of Bodies is not only a Maradaine Constabulary novel, but also crosses over with the Maradaine Elite, that meant I got to write scenes where Jerinne and Corrie are working together.

Corrie drew out her crossbow, looking up to those top floor windows. Arrows were raining down on her, but she might still get one shot off before they took her down.

Then a shadow passed over her, and those arrows became a series of metallic drumbeats.

Nothing had hit her.

Instead she was pulled to her feet. That Tarian girl was in front her, shield high. “Can you run?”

Corrie didn’t even realize what had happened. “Blazes, yes,” she said.

“Then stay with me.” Jerinne drew out her sword and tore forward to the tenement, keeping her shield overhead. The storm of arrows didn’t touch her, didn’t slow her down as they pummeled her shield. Corrie stayed right with her—under that shield was the only safe spot on the street. They got to the front of the tenement, and Corrie and Jerinne pressed flat against the brick wall.

“And Tricky’s on her own in there.”

“Probably on the fourth floor. The lieutenant and his folks aren’t going to make it in until we stop that barrage of arrows,” Jerinne said. She noted Jace and Saitle, behind their cart fifty feet away. “They might make a dash if I cover them.”

“That’s still only four of us,” Corrie said.

“They won’t stand a chance,” Jerinne sent back with a wink.

That, dear reader, was an absolute delight to write.

Of course, I have so many other characters who are also “my favorite”—each in their own unique way. Part of the fun of this epic story, deconstructed into easily consumable pieces, is how I can combine discrete elements of the different series into new permutations. The Corrie/Jerinne team up is just one of them, and each new one I get to do as the saga progresses is another expression of joy.

Marshall Ryan Maresca’s work has appeared in Norton Anthology of Hint Fiction and Rick Klaw’s anthology Rayguns Over Texas. His novels The Thorn of Dentonhill, A Murder of Mages, The Holver Alley Crew, and The Way of the Shield each begin their own fantasy series, all set in the port city of Maradaine.