Andrea Phillips is joining us today to talk about Season 4 of the serial fiction Bookburners, written with Max Gladstone, Margaret Dunlap, Brian Francis Slattery, and Mur Lafferty. Here’s a description: 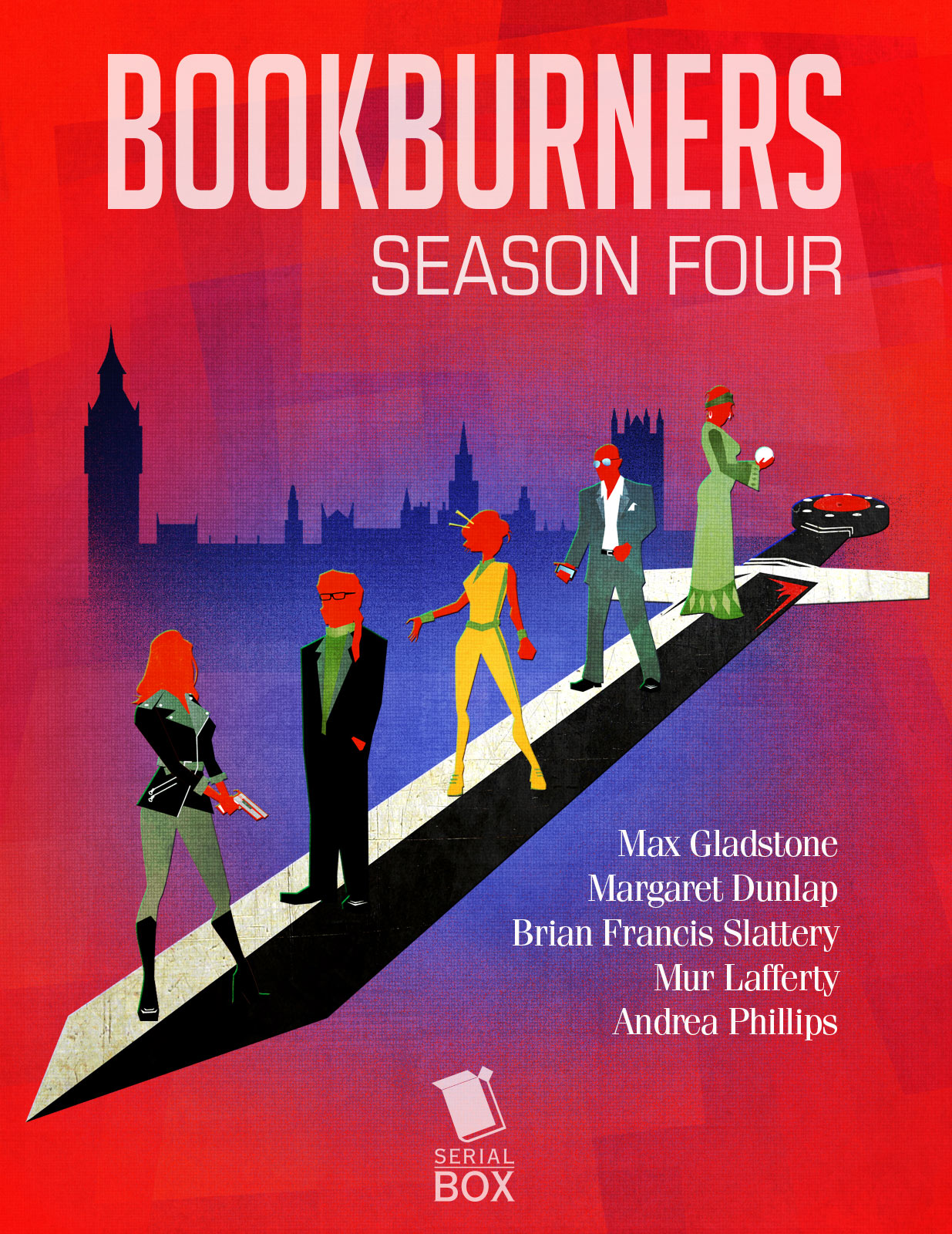 Love is wonderful, isn’t it? It’s wonderful unless you’re a main character in a story. But when you are in a story, if you and your beloved get together any time before the last act… that’s pretty bad news for you and your chance things are going to go well and smoothly. Odds are strong that tragedy is coming your way, self-inflicted or otherwise.

That’s because you just don’t see healthy long-term romantic relationships in media very often (though it bears noting that our hostess Mary Robinette Kowal does write them, and brilliantly!) In large part, healthy relationships are inherently less dramatically exciting. Calm adults rationally talking through their problems and coming to a reasonable compromise makes a great world to live in, but it’s pretty boring to read about.

So in order to make a relationship feel exciting, all of the writer’s focus is often on getting the couple together — how many TV shows have had near-infinite seasons of will-they-or-won’t-they? And then, if the story doesn’t end at a first kiss or a wedding, we tend to fixate on the kinds of stories where it’s easiest to find continuing dramatic tension: external events that come between our lovers. Fights and breakups. Pasts coming back to haunt them, misplaced jealousy and trust issues, cheating, betrayal, ignoring each other’s needs or priorities. It’s high drama, and it’s exciting to read, to be sure. But it’s not… healthy.

Unfortunately, this can have a detrimental effect on the real world, too. There’s strong evidence that the way the world is portrayed in media has a strong effect on our own behaviors. Think about how the Hollywood smoking ban affected smoking rates, and how looking at Photoshop-thin fashion models makes girls more likely to fall into body dysmorphia and disordered eating. And so modeling how a healthy relationship should work is important, simply to maintain and reinforce our cultural understanding that such a thing even exists.

With that in mind, the Bookburners team was dead set on writing the Sal/Grace romance as a solid, healthy relationship going into Season 4. Sal is a veteran police detective, and Grace is a woman cursed in 1920s Shanghai to only live when the candle bound to her life force is burning. They’ve worked together on the Vatican’s black ops magic suppression team for years, and now their partnership has grown deeper.

The strength of this partnership was important to all of the writing team, not least because we love these characters and we want them to be happy. They were always meant to be together. But nobody’s interested a boring story. So what do you do? Introduce external complications that test the strength of the relationship? Just cut off that thread so the dynamic between those two characters remains static and dull for the rest of the series, however long that might be?

Ugh. Terrible options all around.

The good news, though, is that this is a false choice. In reality, a healthy relationship is like a symphony, with tension constantly arising and resolving. And on the Bookburners team, we pass the thread from one writer to another, like a melody passing through each instrument in turn.

The Grace/Sal relationship has been a slow burn, even if it was destined from page 1. Now that we’ve arrived at that moment, we planned extensively for how to move ahead with this relationship, because we did want it to be healthy. But we also wanted it to be dynamic and compelling.

That brings me to my favorite part of this season. At the end of episode 7, Wax, there’s a moment where Sal is worried because Grace has been unhappy lately — not with her; there’s no fear for the relationship there. But Grace has been frustrated with some of the unromantic parts of life, like doing the laundry. Unlike most of us, Grace hasn’t had to deal with the tedium of maintaining a life for years; she’s been a weapon, woken only when it’s time for her to punch something.

Now, though, she’s choosing to live like a person again, at the cost of shortening the amount of life she has left. And Sal is worried for her, wondering if Grace shouldn’t go back to sleeping through the boring parts.

But Grace has a speech that I’m tremendously proud of: she tells a story about a bottle of perfume she’d once had, that she kept saving for a special occasion that ultimately never arrived. And she doesn’t want to do that with Sal. Grace wants to be there all the time, even for the boring parts, because what they have is too precious to miss out on any moment of it.

It’s easy to be in love in the quick, flame-hot days of limerence. But a healthy relationship is what blossoms after that, on every day that you do laundry, or agree to have what your partner wants for dinner even though you don’t like it very much; every discussion about a thermostat or a difficult relative or a misbehaving pet or child. Love is what happens on every day that you choose to be together. Even — especially — on the days when it’s not very exciting.

Andrea Phillips co-writes the serials Bookburners and ReMade for Serial Box, with more on the way. Her solo work includes the novel Revision, about a wiki where your edits come true, the pirate romp The Daring Adventures of Captain Lucy Smokeheart, and the nonfiction A Creator’s Guide to Transmedia Storytelling. Andrea has also written for numerous interactive projects such as the iOS fitness game The Walk, The Maester’s Path for HBO’s Game of Thrones, human rights game America 2049, and the independent commercial ARG Perplex City.