Shannon Eichorn is joining us today with her novel Rights of Use. Here is the description:

In the 1960s, Project Blue Book assured America that no aliens visited its amber waves or shining seas.

Thirty years later, Project Black Book knows better and has the flying saucers to prove it, but they still can’t stop the body-possessing Kemtewet from scooping their pick of young women from Earth to host an alien queen.

Sarah Anderson yearned for an escape from her new life in Pennsylvania, but not for this: being kidnapped by aliens and faced with a choice between having a Kemtewet queen erase her brain or sharing her body with a Gertewet insurgent. Unless the Air Force can rescue her in time, it’s either death or a chance to make a difference in the galaxy. With Sarah, the Gertewet have one last shot to end the Kemtewet Empire and free billions of humans subject to their body markets.

In a war over consent, only some things are black and white. 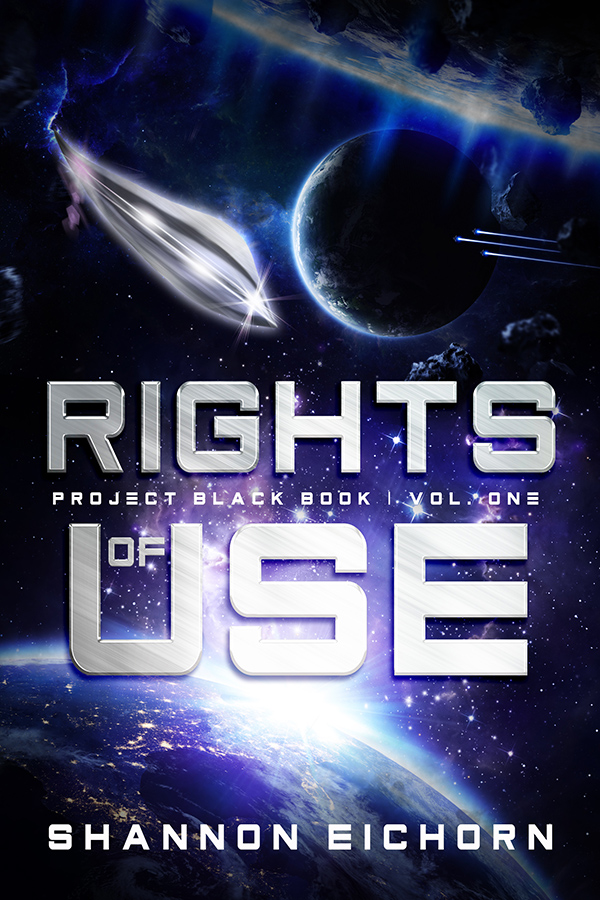 I have an obsession with alien symbionts.

I love the idea of having that constant companion, that implicit ally in every bit of pettiness in daily life. “No, you’re not overreacting. This is a problem.” I like the idea of being paired up with someone older and wiser who can take a step back from the emotions of the moment and call me out. “You can lay off the road rage, Shannon. Tailgating them is unsafe and not going to help anything.” I daydream about having a second perspective available the instant I need it. “You have to make this snap decision for the first time. Here are the implications you don’t know about yet.”

I’ve been writing about body-possessing aliens for fifteen years. As I’ve been revising and polishing the first book in a series, my favorite bit, hands down, is the implantation scene. When I started revising, this was the core thing that kept me from skipping the series beginning: when Vinnet and her host first meet. I especially love it after all the revisions. I love how immediate the host’s fear comes across, and how it shines in the last draft. Even more, I love the situation. Vinnet is a sentient, intelligent, compassionate creature desperate to get her potential host’s permission before implanting herself, but she has no ears and no mouth. She can’t speak or listen. This whole scene is how to be responsible and seek consent when all the odds are against you. Because that’s what good guys do, even when they’re body-possessing aliens and taking over hosts is a fact of day-to-day life.

I love this scene for how it fits in the overall book. This is the end of the world for the new host. It’s been one trauma after another, and to her, this is surely how she’ll die. But because she meets Vinnet and takes on this symbiont, she gets empowered to fight the oppression that brought her here, both as an individual and in conjunction with her entire planet. As a side effect, it even assuages the loneliness she dealt with before she was kidnapped.

Every time I read it, this scene and this book are a touchstone for me to remember that a lot of good can come out of “end of the world” crises. It just takes a long time to see it.

Rights of Use Universal Book Link

Shannon Eichorn is a scifi writer and aerospace engineer in Cleveland, Ohio. She received her Bachelor of Science in Aerospace and Mechanical Engineering from Case Western Reserve University in 2012. During the day, she works in aerospace testing but has also written service instructions for turbofan engines, taught horseback riding at a summer camp, and supported supersonic wind tunnel testing. She is a 2005 graduate of the Alpha Science Fiction, Fantasy, and Horror Workshop for Young Writers.
Did you know you can support Mary Robinette on Patreon!