Alan Smale is joining us today with his novel Eagle in Exile. Here’s the publisher’s description:

In A.D. 1218, Praetor Gaius Marcellinus is ordered to conquer North America and turning it into a Roman province. But outside the walls of the great city of Cahokia, his legion is destroyed outright; Marcellinus is the only one spared. In the months and years that follow, Marcellinus comes to see North America as his home and the Cahokians as his kin. He vows to defend these proud people from any threat, Roman or native.

After successfully repelling an invasion by the fearsome Iroqua tribes, Marcellinus realizes that a weak and fractured North America won’t stand a chance against the returning Roman army. Worse, rival factions from within threaten to tear Cahokia apart just when it needs to be most united and strong. Marcellinus is determined to save the civilization that has come to mean more to him than the empire he once served. But to survive the swords of Roma, he first must avert another Iroqua attack and bring the Cahokia together. Only with the hearts and souls of a nation at his back can Marcellinus hope to know triumph. 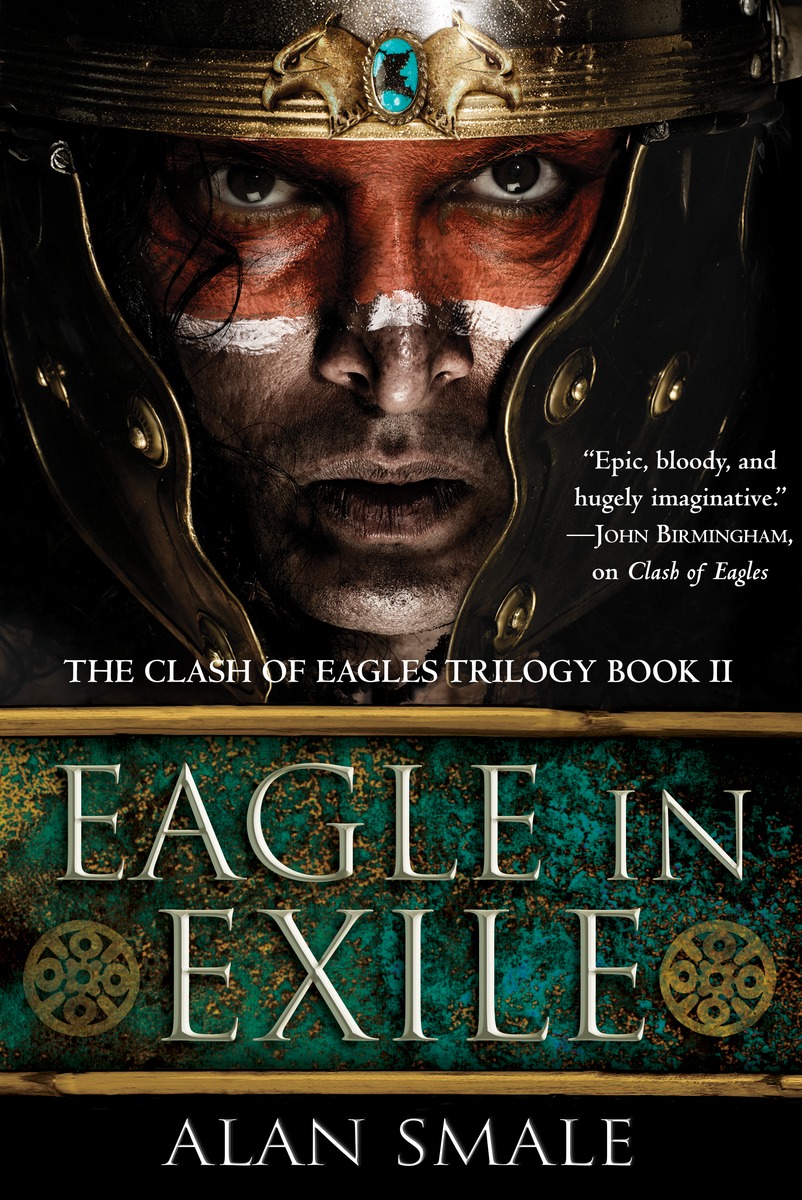 We begin Eagle in Exile deep in the heart of the North American continent in an alternate universe where Rome never fell and Columbus will never sail. The Land – Nova Hesperia – is huge and wild, and populated by a great diversity of tribes and nations that often bewilders my Roman hero, Gaius Marcellinus. The people he currently knows the best belong to the Mississippian Culture, centered in Cahokia, but his world is about to grow even larger.

Given the book’s title, it might not be giving too much away to reveal that in Eagle in Exile Gaius Marcellinus is forced to leave Cahokia for a while. In the pre-historical era, and in fact well into the historical era, the rivers of North America were often more efficient thoroughfares than the extensive land trails, and it’s onto the river he goes: the great and glorious Mississippi, to be precise, in a beat-up and seriously under-crewed Viking longship.

The focus in the Clash of Eagles books is on action and adventure rather than a scrupulous dissection of my alternate timeline (although I could write a detailed essay on the millennium since my point of departure, if anyone wants it). Likewise, Marcellinus’s Mississippi journey is hardly a gentle travelogue. There’s not much jolly Twaining around, though I did strive for occasional flashes of wit. But even in Samuel Clemens’ day the Mississippi was a ruthless adversary. The course of the river was ever-shifting, its banks were treacherously muddy, the current was strong and unforgiving, and its smooth surface obscured the perils that lurked beneath. From Eagle in Exile:

The blue waters of the Oyo, still swollen by snowmelt, entwined with the greenish murk of the Mizipi to produce a broader river with water of a deep golden brown. Relatively straight as it passed the hills and forests north of the confluence, the Mizipi now twisted sinuously through an endless procession of broad curves and oxbows, arcs of water that almost looped back on themselves. Sailing was difficult on a river that could not stay remotely straight for even a few miles at a time, and they relied on the oars to keep them in the deepest part of the channel, where the current could carry them; left to its own devices the Concordia would spin off into eddies and end up in the shallow waters on the outer edges of the curves. The crew also had to stay constantly alert for floating tree trunks, submerged snags, and the endless sandbars that would rise beneath them and threaten to ground them even when they were far from the bank.

From the written accounts in our own history it’s evident that most of the people who lived on the river – the riverboat captains and crew, Native Americans, free peoples and slaves, townsfolk and traders and wanderers – hated the river, or at least treated it with a respect so profound that it differed little from hatred. And not just the Mississippi, either. Lewis and Clarke had a hell of a time beating their way up the Missouri River (also featured in Exile), even with a crew of tough-assed soldiers and mountain men. Their journals are soaked in blood, pain, sweat, sickness, and uh, blisters.

It’s on the Mississippi that Gaius Marcellinus faces some of his biggest challenges. Desperate battles with malevolent bad guys, certainly, but also the challenges of attempting to understand and communicate with cultures that appear even more alien to him than the Cahokians, Iroquois, and Algonquians he already knows. The challenge of reaching an accommodation with his nemesis and love interest who, for better or worse, is also aboard the Viking ship. The challenge of keeping his crew together against overwhelming odds, with the threat of a new Roman invasion just over the horizon. Marcellinus may be pretty good at war, but it’s on this dangerous river voyage that he learns the most about family and community.

And as a backdrop to all that, I got a lot of joy out of trying to evoke the sheer scale, danger, and unpredictability of the mighty, muddy, greasy Mizipi, Nova Hesperia’s greatest river. And that was my favorite bit.

3 thoughts on “My Favorite Bit: Alan Smale talks about EAGLE IN EXILE”