Tristan Palmgren is joining us today with his novel Quietus. Here’s the publisher’s description:

Niccoluccio, a young Florentine Carthusian monk, leads a devout life until the Black Death kills all of his brothers, leaving him alone and filled with doubt. Habidah, an anthropologist from another universe racked by plague, is overwhelmed by the suffering. Unable to maintain her observer neutrality, she saves Niccoluccio from the brink of death.

Habidah discovers that neither her home’s plague nor her assignment on Niccoluccio’s world are as she’s been led to believe. Suddenly the pair are drawn into a worlds-spanning conspiracy to topple an empire larger than the human imagination can contain. 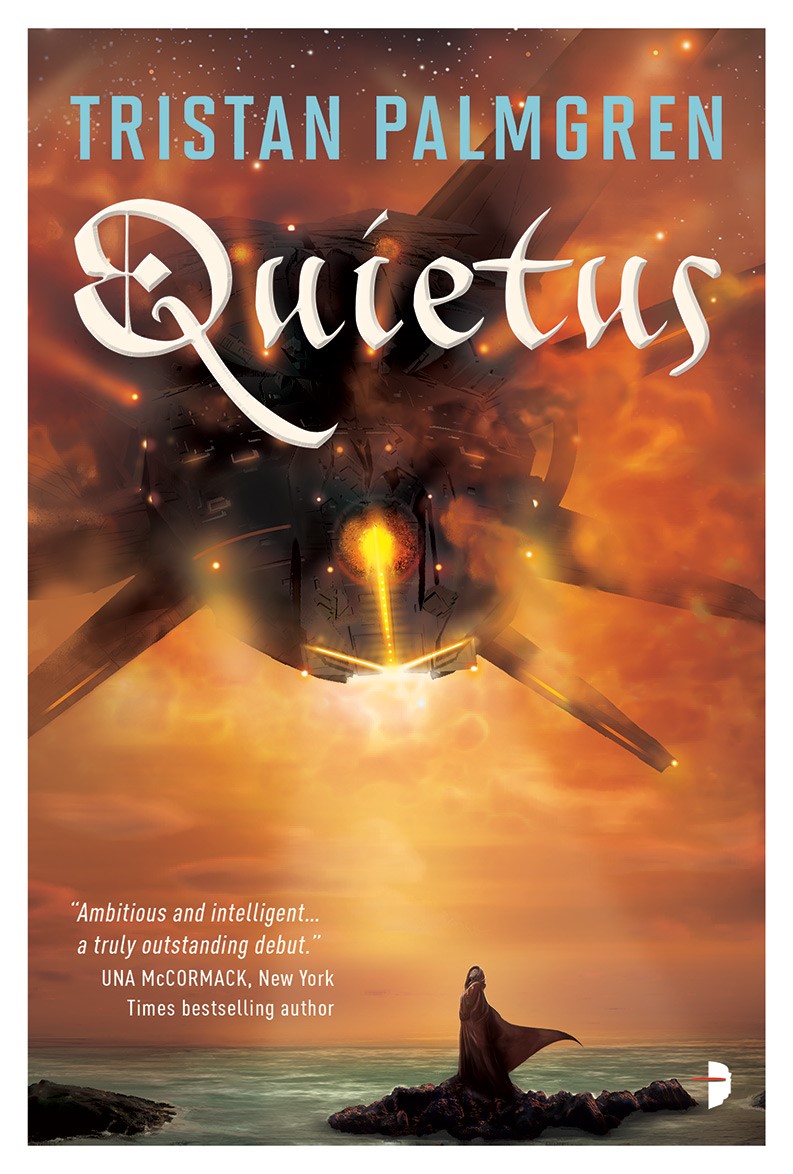 Writing and reading history has always been difficult for me. It’s like reading prequels forever. I can’t erase what I know about the course of history. There’s not enough tension, and too much dramatic irony. As a reader, I have undeserved power over the read.

It’s not just knowing the events of history that spoil things for me, either. It’s our worldview: everything we know and think we know about things like the age of the Earth, astronomy, geology, religion, and more. I can pretend not to know these things, but that’s all it is: a pretense. It’s always there, and it’s always going to be a barrier to understanding a historical novel’s characters and their crises.

I wrote Quietus to foreground that problem. Dr Habidah Shen and her team of extradimensional anthropologists have come, for desperate reasons of their own, to Europe in the 1340s to witness the Black Death. Habidah knows her biases are a problem. She tries to, but can’t, surmount them.

Visual scanning didn’t reveal much besides a few flickering fires. Otherwise, Genoa was as solid black as the open wilderness. To Genoa’s inhabitants, the night must have seemed like a different world, cold and wild and dangerous. It was no wonder many of them believed that the plague spread most easily at night, carried on ill winds. Switching to infrared to pick a landing site felt like cheating.

The shuttle set down just inside the city walls, in an open square near a well. The moment she and Feliks set foot on soil, the ramp folded up. The shuttle vanished with a whisper and a suggestion of a shadow. A cold autumn breeze swept in.

Still thinking of the dark, Habidah turned her retinal infrared off. She wanted to see the world as the locals saw it. Her breath caught in her throat. She might as well have struck herself blind. She couldn’t even see Feliks. The world seemed so closed in around her. She only lasted a few seconds before she turned infrared on again.

My favorite bits of Quietus are those moments that twist the connection between the reader and the read. Habidah is able to do what so many of us history readers dream about: touch the past. When she comes across a dying monk, she cannot stop herself from helping him. Lying on a medical table, he grabs for her hand.

Gradually, Habidah let go. She told him, “I’m going to step out for just a moment and let your friends know where you are. I’ll be back.”

The monk, still holding up his hand, said nothing. Habidah wasn’t sure he’d heard her.

As she stepped through the doors, the monk told her, “Niccoluccio Caracciola.”

She halted on the other side, and looked back. Somehow he’d found the strength to crane his head. He was staring at her with quiet, taut desperation.

“Habidah Shen,” she managed to say before the doors shut.

Habidah is a reader. She studies this world in the same way that we readers try to get into the heads of characters in historical fiction. She uses empathy as a tool. She tries to understand Niccoluccio by placing herself in his position, trying to feel what he does.

But empathy is dangerous. Empathy is not objective.

In Quietus, that’s all right.

He started to step forward, and was stopped by the tug of Habidah’s arm. Only then did he seem to realize that he was still holding Habidah’s hand, and that Habidah wasn’t coming with him.

She said, “This is your home, not mine. I have another assignment in Marseilles.” She should have been there weeks ago. The plague’s late arrival in Genoa had delayed her. “My superiors don’t want me to get more involved. I’ve done too much already.”

“I can’t bring myself to pass the gates alone. I would rather wander the wilderness again.”

“You won’t be alone once you find your family. I don’t want to interfere.”

“You don’t need to interfere.”

The moon shone bright enough that Habidah didn’t need infrared to take stock of the fear in his eyes. “All right.” Only then did they let each others’ hands go.

She’s taken on a responsibility she’s not ready for. Through Niccoluccio, Habidah starts to see herself in ways she would rather not. While recovering from an injury with the aid of Habidah’s technology, Niccoluccio tells her:

“Only because our medicine has tricked you into feeling that way.”

His eyes flicked over himself, to the bruise creeping down his shoulder and the hollow curve of his stomach. If he hadn’t felt alienated from his body before, he would now. “Oh.”

Sometimes, she didn’t think he was sufficiently afraid of her and her people. There was certainly a lot to fear. More than she’d known.

She was more than an angel or agent of God, she realized. She’d become his confessor. When she’d taken him in, the last thing she had ever expected of him was unremitting trust.

There’s a lot of things I love about Quietus, but Habidah and Niccoluccio are the reason why I wrote it. They are by far my favorite part. Their relationship only gets more complicated, and fraught, from here.

Tristan Palmgren has been a clerk, a factory technician, a university lecturer, a cashier, a secretary, a retail manager, a rural coroner’s assistant. In his lives on parallel Earths, he has been an ant farm tycoon, funeral home enthusiast, professional con-artist impersonator, laser pointer chaser, and that guy who somehow landed a trademark for the word “Avuncular.” Jealous. He lives with his wife Teresa in Columbia, Missouri.