TJ Berry is joining us today with her book Space Unicorn Blues. Here’s the publisher’s description:

A misfit crew race across the galaxy to prevent the genocide of magical creatures, in this unique science fiction debut.

Having magical powers makes you less than human, a resource to be exploited. Half-unicorn Gary Cobalt is sick of slavery, captivity, and his horn being ground down to power faster-than-light travel. When he’s finally free, all he wants is to run away in his ancestors’ stone ship. Instead, Captain Jenny Perata steals the ship out from under him, so she can make an urgent delivery. But Jenny held him captive for a decade, and then Gary murdered her best friend… who was also the wife of her co-pilot, Cowboy Jim. What could possibly go right? 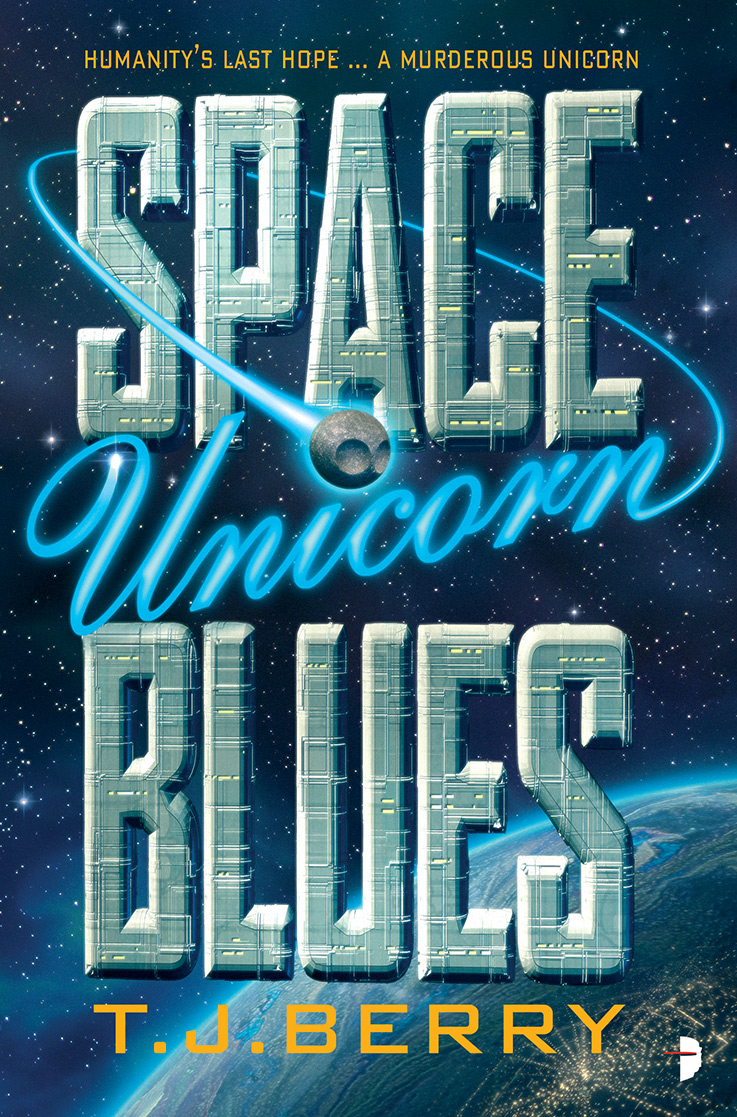 My favorite bit about Space Unicorn Blues is a single word deep in the book about a quarter of the way from the end. Part-unicorn Gary Cobalt reminisces about his human mother teaching him how to read and write languages from her home planet of Earth:

His mother, on the other hand, had taught him only two human languages: English and Kannada. She showed him how to assemble sticks and balls to make English letters and how to glide his pen through the undulating contortions of the Kannada alphabet.

The single word is the name of an Indian language, Kannada, and it’s my favorite because it was a reminder to me of a wonderful dinner spent with friends discussing their home city.

My zero drafts are sprawling things in which logic, reason, and story arcs don’t exist. Anything from an underwater helicopter chase to a love story between an octopus and an assassin can end up on the page. I write recklessly and rapidly, daring myself to visit every unexpected possibility before settling down to find the heart of the story. It gets the pantsing urge largely out of my system so that I can hew close to my outline in subsequent drafts.

But this fast and furious approach means that I don’t slow down for research during a zero draft. I toss in hundreds of brackets full of placeholder text like [insert saucy jokes here] and [look up the flag of New Zealand]. It also means that some of what I write is flat-out wrong. I originally dashed off the two lines above using Hindi as the language that Gary’s mother would have taught him. It wasn’t until nearly two years later that I discovered my mistake.

You see, Gary Cobalt is the descendent of aerospace engineers who live and work in Bangalore. They board a generation ship to escape a dying Earth, and decades later their granddaughter Anjali falls in love with a space unicorn. (I know. Just trust me.) It wasn’t until I passed the manuscript to a group of sensitivity readers and expert advisors that my error was pointed out to me. Friends who had offered to fact check the parts of the book influenced by Indian culture asked me, “Why is she teaching him Hindi? We only speak Kannada at home and that’s what we’d teach our children.”

Reader, I am ashamed to admit that even though I consider myself moderately well-versed in the basics of Indian culture—okay, maybe we’ll just call it a semester of grad school Hindi and eating more baingan bharta than I care to admit—I had never encountered Kannada. Luckily, my friends were quite eager to fill me in about their beloved home city over a long and delicious curry dinner.

They patiently and cheerfully answered all of my questions about Bangalorean family life. I learned what spices and seeds would be vital to bring onto a generation ship destined for an unfamiliar planet. They helped me brainstorm names for space stations and ships based on important figures in Indian history. At one point, we got into a deep dive about mango pickle. This is, I have learned, a Very Important Condiment in Indian cuisine. Every family has their own mango pickle recipe, which is always better than any other family’s recipe. The instructions are passed down through the generations with such reverence that I don’t think it’s unreasonable to assume that Indian families on a deep-space generation ship will someday have a minor civil unrest that begins with a slight to one person’s mango pickle.

They ordered a dish of it and urged me to add it to everything on the table. As a person from a culture where the primary condiment is sugared tomatoes boiled down to a paste, I felt that I might be on familiar ground with a condiment with “mango” in the name, but it was not sweet at all. The pickle I tried was not particularly spicy, but it was astringent—vinegary and tart with hint of licorice whenever I hit a fennel seed. The mango is meant to be green and have an al dente bite. It’s absolutely lovely and I want to eat it with everything, which is precisely the point of a mango pickle.

After all was said and done (and eaten), a dozen plates of food and hours of discussion distilled down to a single word in the actual book. That’s often how research works, but this time I also came away from the table with two dozen pages of notes for a different book about a generation ship full of Bangalorean engineers and the strife caused by a jar of mango pickle.

TJ Berry grew up living between Repulse Bay, Hong Kong and the New Jersey shore. Her favorite pizza is a plain slice from Three Brothers in Seaside Heights. She can be coaxed into a trap using any type of cheese.

TJ has been a political blogger, bakery owner, and she spent a disastrous two weeks on the assembly line in a razor blade factory. She now writes science fiction, fantasy, and horror from Seattle with considerably fewer on-the-job injuries.

She also co-hosts the weekly Warp Drives Podcast with her husband, in which they explore science fiction, fantasy, and horror via pop culture and literary lenses. Find her on Twitter @TJaneBerry and online at http://tjberrywrites.com.