Timothy Jay Smith is joining us today to talk about his novel The Fourth Courier. Here’s the publisher’s description:

It is 1992 in Warsaw, Poland, and the communist era has just ended. A series of grisly murders suddenly becomes an international case when it’s feared that the victims may have been couriers smuggling nuclear material out of the defunct Soviet Union. The FBI sends an agent to help with the investigation. When he learns that a Russian physicist who designed a portable atomic bomb has disappeared, the race is on to find him—and the bomb—before it ends up in the wrong hands.

Smith’s depiction of post-cold war Poland is gloomily atmospheric and murky in a world where nothing is quite as it seems. Suspenseful, thrilling, and smart, The Fourth Courier brings together a straight white FBI agent and gay black CIA officer as they team up to uncover a gruesome plot involving murder, radioactive contraband, narcissistic government leaders, and unconscionable greed. 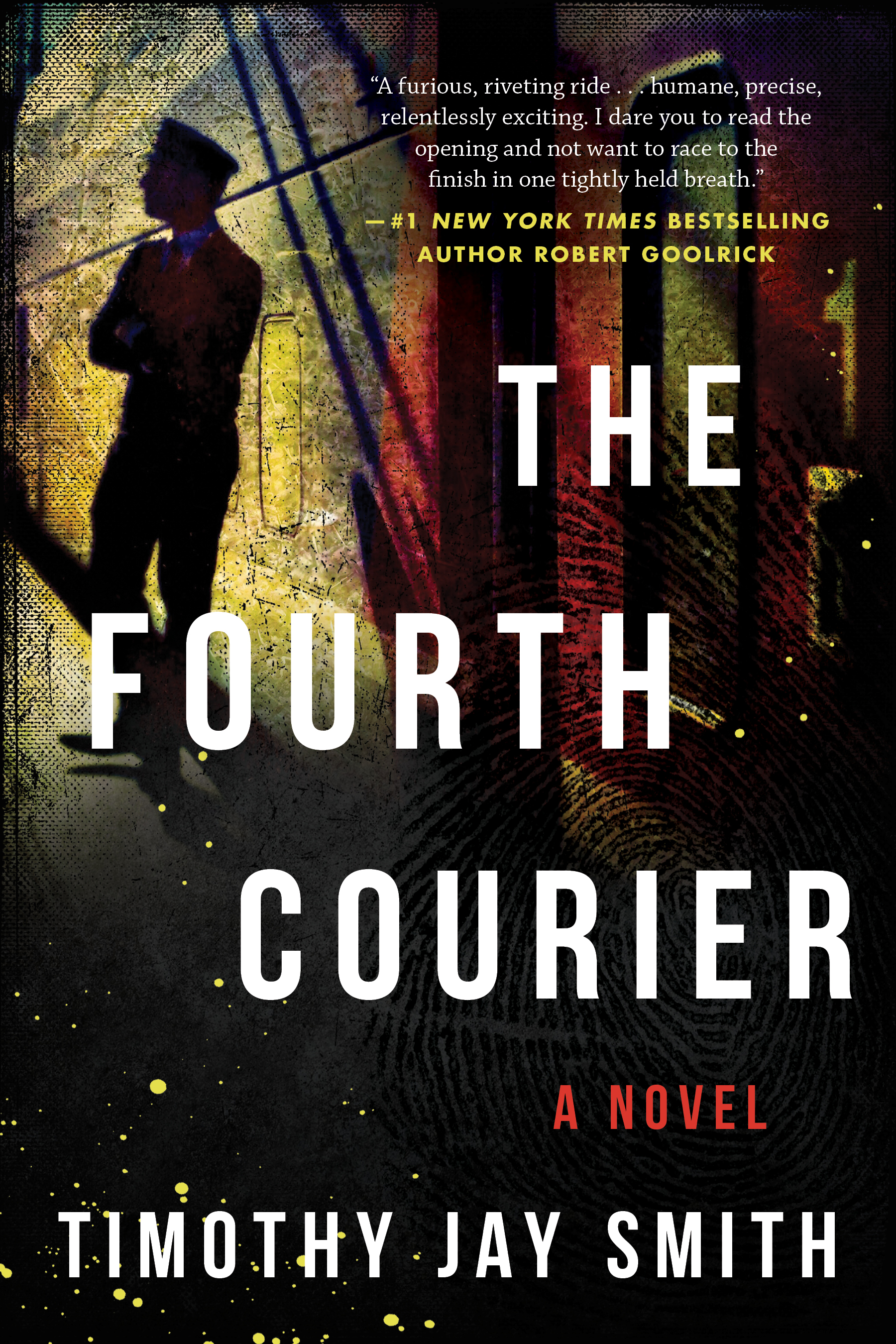 The minute I learned that my challenge for this blog was to select my favorite bit in my new novel, I knew what it would be. The Emma scene. Chapter Six. Rarely has a scene been so much fun to write—and relive, because it’s based on a journey I took some forty years ago.

Two strangers—Dr. Sergej Ustinov, a genius Russian physicist, and Emma, a plump and lustful Russian-American on her way to visit relatives—by lucky chance have a first-class compartment to themselves in a train crossing Russia. While my real-life journey and scene in the book end differently, most elements are exactly the same: the cans of soup falling out of Emma’s duffel; a greasy bag of dried fish that they share; and finally, complaining about her feet hurting, she drops a foot over Sergej’s thigh urging him to massage it. There’s a lot of humor in the whole scene, and pathos, too. (Lina Wertmuller-ish for those who know her movies.) Here’s a taste of it:

Of course he couldn’t exactly ignore her foot resting on his leg, nor entirely block her squirming toes from view. Her nails were painted cherry red, which he realized did make her feet attractive, certainly more attractive than the coarse yellow nails his wife hadn’t painted since their first anniversary. Oh, why not massage her foot? he decided. It might be fun, and he couldn’t remember the last time he’d touched someone’s foot other than his own. Tentatively he wrapped his fingers around her arch and squeezed. “Is that where it hurts?” he asked.

He gripped her foot tighter and massaged it with his thumbs. He found he rather enjoyed it; there was an unfamiliar sensuality to it, and as a bonus, from this angle he could peek up her skirt to where her heavy legs disappeared in a dark shadow. Gradually his fingers migrated to her toes, which they worked vigorously, rooting down between them, and bending them to crack them. For the first time he understood why some people sucked toes for sexual pleasure, and if his back had been more limber, he might have dared to bite hers.

Suddenly the situation, and certainly his fantasies, seemed ludicrous to Sergej. He released her foot and said rather coldly, “I hope it feels better.”

The sense of scene is crucial to my writing. It’s how I think about a story. Before I start new work, I always have the opening and closing scenes in my head, and then I fill in everything else. I think it comes from growing up in a house where the television was never turned off. We kids were even allowed to watch TV while doing homework if our grades were good. Later in life I’d joke that canned laughter was the soundtrack of my childhood.

I haven’t owned a television for many years, but growing up with it exposed me to scene-driven notions of how to tell a story and be efficient with dialogue. When I completed my first novel, by chance I took a workshop with Sebastian Junger who had just sold the film rights to The Perfect Storm. When he said he would have nothing to do with writing its adaptation, I immediately decided to study screenwriting. I wanted to be knowledgeable enough to have some artistic input into that process, should I ever be fortunate enough to have the chance. That training reinforced my natural inclination to visualize my stories in scenes, which is also why my readers say they can see my stories as they read them.

I worried about selecting Emma’s scene as my favorite bit because of “Chekhov’s Gun”— the notion that every element in a story should contribute to the whole. I knew Emma would only be in one scene. Was that sufficient? Did she deserve so much space on those few pages? Could I make her appear again? Ultimately I decided she didn’t need to. It’s Emma’s scene only because it’s her only scene. It’s even more Sergej’s scene, especially because it’s the first time readers have the chance to begin to understand his psychology.

Raised crisscrossing America pulling a small green trailer behind the family car, Timothy Jay Smith developed a ceaseless wanderlust that has taken him around the world many times. Polish cops and Greek fishermen, mercenaries and arms dealers, child prostitutes and wannabe terrorists, Indian Chiefs and Indian tailors: he hung with them all in an unparalleled international career that saw him smuggle banned plays from behind the Iron Curtain, maneuver through Occupied Territories, represent the U.S. at the highest levels of foreign governments, and stowaway aboard a ‘devil’s barge’ for a three-days crossing from Cape Verde that landed him in an African jail.

These experiences explain the unique breadth and sensibility of Tim’s work, for which he’s won top honors. Fire on the Island won the Gold Medal in the 2017 Faulkner-Wisdom Competition for the Novel. He won the Paris Prize for Fiction (now the Paris Literary Prize) for his novel, A Vision of Angels. Kirkus Reviews called Cooper’s Promise “literary dynamite” and selected it as one of the Best Books of 2012. Tim was nominated for the 2018 Pushcart Prize. His screenplays have won numerous competitions. His first stage play, How High the Moon, won the prestigious Stanley Drama Award. He is the founder of the Smith Prize for Political Theater.