Stina Leicht is joining us today with her novel Cold Iron. Here’s the publisher’s description:

Fraternal twins Nels and Suvi move beyond their royal heritage and into military and magical dominion in this flintlock epic fantasy debut from a two-time Campbell Award finalist.

Prince Nels is the scholarly runt of the ancient Kainen royal family of Eledore, disregarded as flawed by the king and many others. Only Suvi, his fraternal twin sister, supports him. When Nels is ambushed by an Acrasian scouting party, he does the forbidden for a member of the ruling family: He picks up a fallen sword and defends himself.

Disowned and dismissed to the military, Nels establishes himself as a leader as Eledore begins to shatter under the attack of the Acrasians, who the Kainen had previously dismissed as barbarians. But Nels knows differently, and with the aid of Suvi, who has allied with pirates, he mounts a military offensive with sword, canon, and what little magic is left in the world. 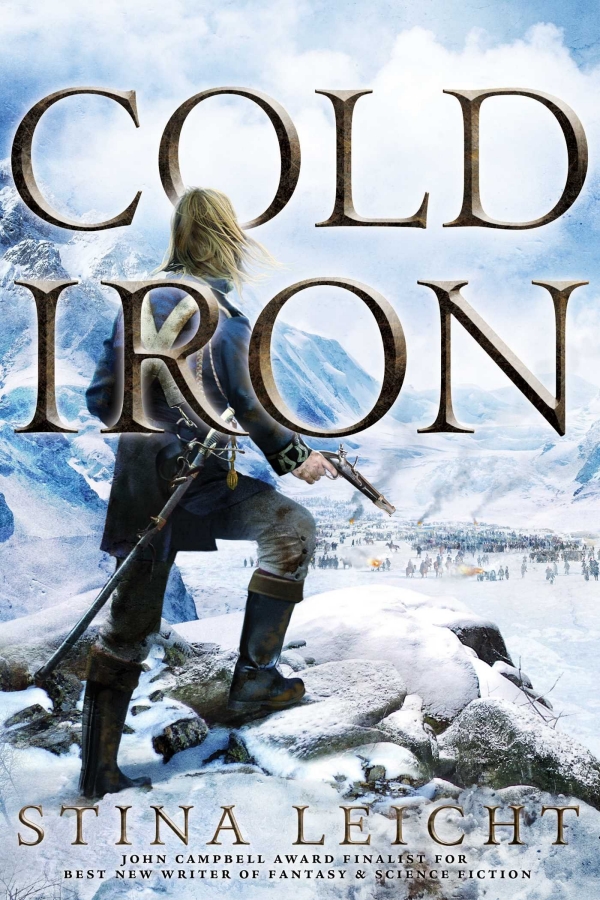 Every novel has that moment when it signals to the author that everything is working. Cold Iron was no different. Mind you, it took a while because Cold Iron, the novel, started life as a failed short story. I say failed because it never sold, and I gave up sending it out. (Which, by the way, you totally shouldn’t do.) Anyway, I’m a novelist. So, that short story grew into the novel, but I didn’t fall in love with it until Nels’s best friend Viktor appeared.

Viktor Reini is Nels’s korva. Korvas are kainen with a certain talent for fading into the background. They’re quiet. They’re extremely average-looking. They’re the people that people don’t see. They’re also great listeners. All these things make them excellent spies, scouts, assassins, and thieves. As a result, freebooting korvas are illegal. They need an affiliation or a patron. Otherwise, they’re executed—if caught. There are exceptions, mind you, but if a korva is caught and is given a second chance, they’re marked with an obvious facial scar. In any case, Viktor has no scar. He has a patron, Suvi, Nels’s twin sister. She pays him to work for Nels.

As it happens, Nels and Viktor get off to a rocky start. Nels, unsure whether or not to trust Viktor, makes the classic mistake of not delegating. Instead of leaving Viktor to steal an illegal weapons cache—one that Nels has already paid for but the dealer hasn’t delivered—Nels decides to accompany Viktor. For the record, Nels isn’t very good at sneaking.

Entering the cave, Nels paused until his eyes adjusted to the dim light. Water dripped somewhere ahead, echoing off the smooth, rippled walls. He’d edged a hundred feet down the tunnel before the moonlight gave out, and he was forced to feel his way along the wall. He had ordered Reini to wait with the lantern a discrete distance from the entrance. Judging by the absence of light, it was clear they had differing opinions on what that meant.

“You’re doing better, even if you do breathe louder than a stampeding herd of elk,” Lieutenant Reini whispered. He was close enough that Nels could feel Reini’s breath on his ear.

Damn it. This isn’t going to work out, is it? Nels thought and then reconsidered his frustration. As if you can get through a day without arguing with Major Lindström, you hypocrite. It was a sign of Reini’s great magical talent that Nels hadn’t even sensed the use of magic. “Just open the damn lantern before I kill myself.”

“Cut the crap, Lieutenant, if you plan on retaining the little braid you’ve got.”

Light inundated the passage with a tiny squeak from the hooded lantern, revealing the passage ahead. Nels could now see Lieutenant Reini—-an unremarkable six foot tall kainen with light brown hair bound into a soldier’s club. Shadows cast on Reini’s face did not mask the twinkle of humor in his black eyes. If Nels had met Reini under other circumstances, he was certain he’d have liked Reini at once. They shared a similar attitude toward authority, after all.

“The crates are this way,” Reini said. “This is going to be like stealing milk from a sleeping cow.”

Nels followed Reini, skirting the edge of an underground stream. Shadows cowered from the light. At last, the blackness faded. The lantern’s hood was shut, emitting a second squeak. Ahead, a bright circle of moonlight marked the water well behind Almari’s house. The curved stone walls of the well were set with a series of iron rings leading to the surface. Looking up, limestone and old mortar framed a stormy moonlit sky. Flickers of lightening danced in the gathering clouds.

“I understand Almari does the bulk of his business in smuggled Ytlainen port,” Reini whispered. “We should acquire a few casks while we’re here.”

“Only the muskets, Lieutenant,” Nels said. “Anything else is stealing.”

“You take the fun out of everything, sir.”

Lieutenant Reini paused. “I must say, you aren’t entirely what I expected.”

“And what did you expect?”

Reini glanced over his shoulder with a sly grin. “A spoiled autocrat with no sense of humor and even less common sense.”

I love that Viktor uses “stealing from a sleeping cow” because one of the real world legends about fairies — well, Irish fairies, anyway — is that they steal milk from farmers’ cows. Of course, things go bad for Nels and Viktor. They walk into a trap, they’re outnumbered, and there’s no retreat. This leads Nels to say…

“I thought you said this would be easy.”

“Never said that. I believe my exact words were that this was going to be like milking a sleeping cow.”

That was the moment I knew I was on to something. From that point forward, I had a wonderful time with Nels and Viktor. Hopefully, everyone else does too. And now here’s your chance to see for yourself. My publisher, Saga Press, is giving away a copy of Cold Iron today. If interested, just write a comment below, and you’re entered in the giveaway. One entry per person. I’ll announce the winner in the comments and on Twitter. Good luck!