Sandra Tayler is one of my favorite people. She has an utterly charming children’s book out called Hold on to Your Horses. I’m not going to say too much, because when Sandra explains why she wrote the book, you’ll understand why I think it is so wonderful.

The moment which inspired me to write Hold on to Your Horses was the antithesis of a favorite bit, yet out of that hard moment the best bits were born. It began as my five-year-old daughter curled into a little ball in my lap and wailed, “Why am I always the problem?” She seemed so small, different from her normal blur of energy. She lived her life on the run, no time to stop or snuggle, but when she was sad, she huddled in my lap. Sadness happened a lot during the fall when she collided with kindergarten. She loved kindergarten with a passion that knew no boundaries. Unfortunately boundaries exist for reasons and my enthusiastic girl had to be disciplined. Often. As the months progressed I watched her beginning to draw the conclusion that perhaps she was just a bad person, doomed forever to visit in the principal’s office. I hugged her tight and knew that she needed a story, one that would give her an option other than being a bad person. I decided to write one. 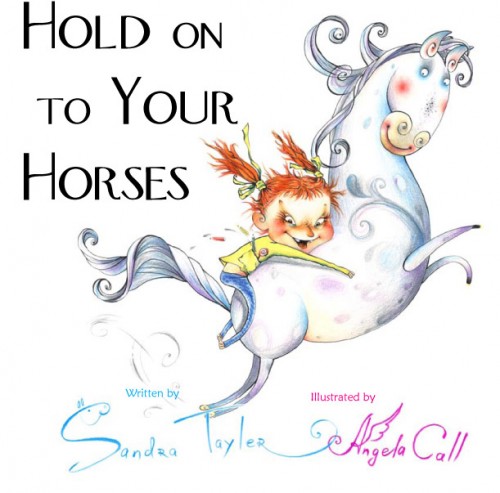 That decision launched me into a marathon self-publishing adventure. In an effort to give my daughter the story she needed, with pictures, I contracted with an artist I’d never met, learned how to use professional design tools, and scrambled to figure out a publishing process that fit the project. It was terrifying. Then there was the day when my artist, Angela, mailed me the original artwork to be scanned. I’d seen the images before via electronic means. Her images were so evocative that I’d been able to pare away some of my words, letting the pictures carry extra depth and meaning. I knew I was lucky to have found Angela. Yet holding the papers in my hands was entirely different. Colored pencil has iridescence in person that can’t be replicated in a scan or a print. The pages caught the light and refracted it at me as I carefully leafed through, touching only the corners of the pages. Angela had given me thirty gorgeous pictures to illustrate my words. I was awed by the gift. Holding those pictures would be my favorite bit of Hold on to Your Horses, except for the bit that came later.

I watched as the truck backed into my driveway to drop off two pallets of books, weighing just over a ton. Two thousand books were coming into my house and I’d only pre-sold one hundred of them. I felt the weight of all those books as is if they were pressing on my shoulders. So many hours of my work and Angela’s were represented there, and it was now my job to figure out how to sell enough to pay Angela for the three months she gave to the project. It was overwhelming. But I cut open the first pallet and pulled a book out of the box. It was real and solid in my hands. I carried it to my kitchen and signed it to my daughter. Then I presented it to her. By that time it was a full year and a half since the day she’d cried in my lap. She’d survived kindergarten and gone on to have a much better first grade. She’d listened to the story, revision after revision. She’d seen the pictures as they arrived in my email. The basic metaphor of the story helped her to picture her ideas and impulses as separate from herself, things to be managed. The story, which had already helped her, was finally a book in her hands. My eyes leaked a little bit as I handed it over. Whatever else Hold on to Your Horse smanaged to do out in the world, it had accomplished its first purpose, and that was my favorite bit.

Sandra Tayler is a writer of essays, speculative fiction, children’s books and blog entries. She has sold stories to anthology markets, including DAW. In February 2009 her blog, onecobble.com, won an AML award for online writing. A sampler of blog entries is now available in printed format under the title Cobble Stones. Sandra spends much of her time as the publication and distribution half of the Schlock Mercenary comic business. Sandra’s publication work and her writing are frequently pre-empted by the needs of her four kids, who alternate between being incredibly helpful and incredibly distracting. Some day in the future Sandra hopes to experience this free time that she has heard so much about.

1 thought on “My Favorite Bit: Sandra Tayler talks about Hold on to Your Horses”