S. K. Dunstall is joining us today with their novel Alliance. Here’s the publisher’s description:

The lines. The soul of every ship. It was once thought there were only ten, but that was before an alien vessel appeared at the edge of space—before Ean Lambert heard more lines singing. Ean’s ways of communicating with lines is strange. But his abilities make him a valuable tool—or weapon—to command.

Captain Selma Kari Wang has lost everything—her ship, her crew, her legs. But the New Alliance of Worlds is not done with her yet. After they rebuild her broken body, they send her to captain one of the new alien ships, teaming her up with Ean, the only one who can understand the alien lines.

Kari Wang and Ean are poised on the threshold of discoveries that could change the world. But not everyone wants the New Alliance to control the secrets they uncover—and those who oppose won’t hesitate to do whatever it takes to stop them… 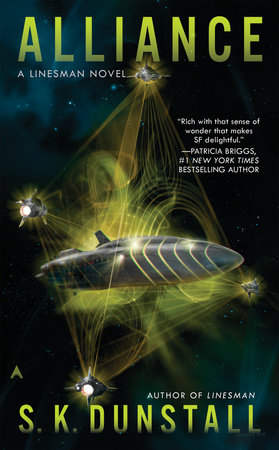 Hmm. How do we talk about this one without spoilers?

Because this favorite bit is right in the middle of the final action scene.

Each of us has our own favorite bits in the stories we write. They’re not generally the same.  Sherylyn tends to like the scenes with big emotional impact, while Karen goes for the scenes with clever banter.

Fitch’s grin stretched almost ear to ear.  “Congratulations, Captain. You have a new pair of legs.”

She stared at the bright white ceiling and ignored them.

The light dimmed with the night. Brightened again with the new day. Over and over.

They should have let her die along with the rest of her crew.

Is something Sherylyn would pick out as a personal favorite, while Karen’s might be:

“Will you look at that,” Mael said to Tinatin. “Captain Legless.”

But with Alliance we had the same favorite bit, and it’s right in the middle of the finale.

The best space operas have the following in common.  Characters you care about. Fights, action. High stakes.  It’s often served with a dose of humour or repartee that makes you quote lines to your friends for ever after.

They’re action adventure stories, and like any action adventure, the stakes keep rising until everything comes together in one final major scene, good guys against bad guys. All the plot points come together at that time too.

We’re what they call ‘pantsers’, writers who find out the story as they go along rather than plotting it all out at the start and writing to the plot. With two of us writing, there is a little bit of planning in that we will often talk out a scene just before we write it, so that we agree on what’s going to happen. Just-in-time plotting, if you like, but that’s all.

In this book our major storyline is how Ean Lambert, who is now the New Alliance’s leading linesman, teams up with Captain Selma Kari Wang, who has just lost her ship, as they learn how to work with the alien line ships. There’s the enemy, of course, who are trying the prevent them doing that.  There’s also a secondary story happening.  The mystery of the destruction of Kari Wang’s first ship.

Naturally, as the story progresses, the stakes get higher in each storyline.  Until it all comes together in the finale.

So even though we don’t plan our story, in Alliance we were always writing to this one scene. We didn’t know how it would happen, we just knew the two stories would come together here. So that of course, right when Kari Wang needs him most, Ean’s got big problems of his own.

Which is why his first answer, when she demands his help, is,

When we started we didn’t know how we were going to get there, or what happened when we did get there, but it all came together for us.  It worked, and it was a fun journey.

That’s why it’s our favorite bit.

They live in Melbourne, Australia.