R J Theodore is joining us today with her novel Salvage, sequel to Flotsam. Here’s the publisher’s description:

Peridot is headed for its second cataclysm. War has broken ancient alliances, sealed borders, and locked down the skies. The Five, Peridot’s alchemist gods, have seen one of their number die and another fall in their efforts to protect their world from invaders beyond the stars. Defeated and diminished, they have ceased to answer the prayers of their people and have left the rapidly unraveling world to fend for itself.

Talis and the orphaned crew of the lost airship Wind Sabre have a plan to set things to rights, but they’re stranded on a rock far from the heart of the conflict. When an old enemy comes and offers them a ship and a path forward, it comes with strings that will pull them further from the home they are so desperate to save.

Can Talis and her crew chart a course through hostile skies, shifting allegiances, and subverted governments before the true enemies of Peridot claim a power that can destroy the world once and for all? 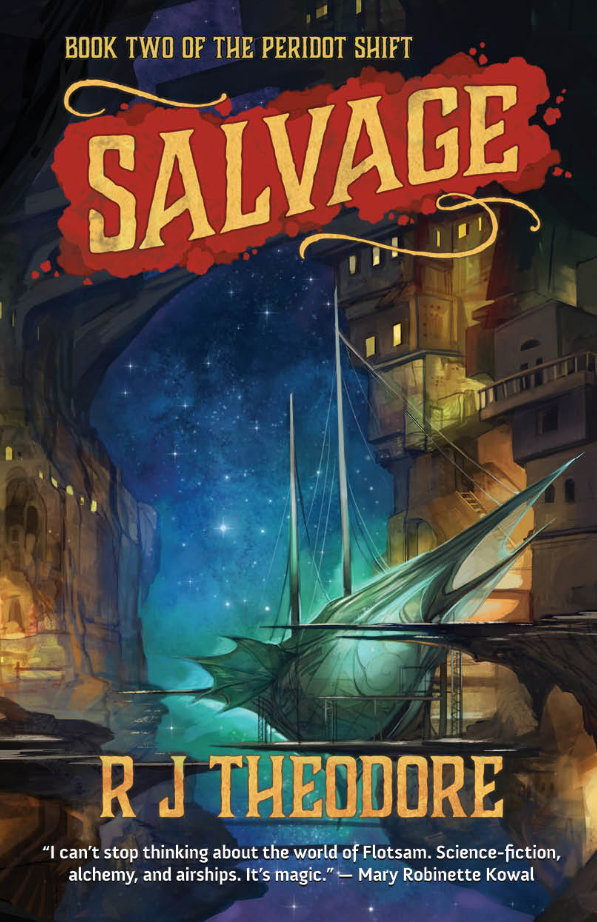 Chanteys are ubiquitous to tall ships and sailing. For SALVAGE, the second novel in my Peridot Shift series, I wanted a chantey to provide rhythm for my airship crews and a dose of social commentary. Easy! Fun! I could add this in and move on, right?

But my self-assigned challenge became a grand obstacle. Dear reader, I began to overthink it.

I analyzed Earth chantey themes from top to bottom, hoping to translate them into Peridotian versions that would be both familiar and unique. But the idioms of Earth and language of maritime lyrics I thought would inform my work… simply didn’t apply.

And soon we’ll see old Holyhead
No more salt beef, no more salt bread
I catch my Jinny and off to bed
Jinny get your ring-tail warm1

I knew the song I wanted came from my Cutter culture, in which a ship feel more like home than land. Songs about eagerly returning to shore didn’t ring true. Likewise, outbound songs about the ocean and water didn’t suit my aeronautical industries.

We’re far enough removed from their origins that chanteys often seem like fun maritime nonsense, but chanteys communicate an astounding amount of information about class, race, economy, and mental health. For example, one of the most famous chanteys is “Blow the Man Down.” It’s such fun to sing that they picked up the tune for the Spongebob Squarepants theme, but the song itself speaks of abuses sailors were subjected to on the Black Ball line, a particularly capitalist endeavor.

A startling number of oceanic chanteys were written about specific people and were not shy about saying so. This was universal and could work on my novels’ airships, but my song would be used in the middle of a Hudson Hawk-esque heist. Tossing in the name of some hitherto unknown Cutter Imperial captain might distract the reader even if the concept fit. The same goes for locations. There were a few choice ports whose names would be familiar to the reader, but referencing places already introduced might shrink the world rather than expand it (akin to seeing Jack Sparrow receive his captaincy, signature pistol, hat, AND scarf in a single origin story moment).

Also, and here’s the kicker, I dislike lyrics in written works. I enjoy screen adaptations where an in-world song is performed (as in Lord of the Rings or The Hunger Games), but on the page, I skim inset stanzas for details I might need and move on without lingering in the lyricism.

So, in addition to creating cultural weight and situational parallels to my story, I challenged myself to write lyrics even I would read. That meant conveying the tune through the repetition of syllables and solid meter, even on the first read-through.

This little plot detail, meant to flesh out my world, was growing into a senior thesis project. The easiest thing would have been to drop it and finish my book, but now I was sold on the concept and determined to rise to the challenge.

Mind you, I didn’t just need one song. There are catalogs of songs sung by tall ship crews during their work and after. I wanted this song to feel like one of many. In my narrative, I’d already named a few tunes as characters hum or sing and now my brain was so steeped in thinking about chanteys that I realized I needed at least two full songs.

Really, three would be better.

Yet I still hadn’t written one that I liked. I had expansive notes, a Spotify playlist, bookmarks of lyric archives, and links to historical recordings on YouTube.

I banged my head against this challenge before I finally came to a realization: the songs I was trying to pay homage to were complex in their steeped culture, but not so much the lyrics. Yes, they felt complex to me because I recognized the significance of the terms and the meaning, and that took work.

But these were composed by sailors, with simple rhythms to pass the time and coordinate crews’ work. The word choice at the time would have been invented in a moment of inspiration and, over more, easy to memorize. Not a historical study, they were crafted from the vernacular with just a touch of cheek. And maybe make a joke or two at their employers’ or officers’ expense.

In fact, that latter was the purpose one song I wanted. In my third book, I knew a crew would change the lyrics to mock a certain character. How would the reader know the lyrics had been changed and not written on the spot about that person? If I used the same chantey, with its ‘original’ lyrics, in SALVAGE!

With that realization, my brain gained some traction on the concept.

The song came together as a call-and-response format, starting with a caller’s single voice, and a response from the rest of the team consisting of one or two variations on a single phrase. It forced me to keep it simple and, in that simplicity, all the subtext I wanted appeared without me overloading the text.

Once I got the first one down, it was as if a stopper had been pulled. The second sky chantey came to me in the shower (I still really need to get one of those waterproof notepads), and a third was birthed somewhere between the computer and the coffee pot.

The daunting task that kept me up at night, haunted by the tunes of reference material that would not get out of my head, suddenly became my favorite bit of the novel.

My earliest attempts read exactly like the very struggle to repurpose existing songs that they were. The final songs that made it into the novels are birthed from the Cutter traditions of Peridot and natural to the cultures from which they would have come.

And on top of that, if you get a group of people together, the songs are one hundred percent sing-able without much help. That alone would be worth all the effort!

(from SALVAGE by R J Theodore)

Well our captain is a high-born type;

You should see his palecoat catch the light;

He’ll polish his buttons straight through the night.

The captain ain’t a bastard like you an’ me;

No, the Captain’s got a pretty little ancestry;

You could fall to your death from his fam’ly tree.

Our captain inherited an island home;

Doesn’t have to sail where the winds push on;

And when we dock that’s where he’s go’n.

R J Theodore lives in New England with her family, where she enjoys reading, design, illustration, video games (she will take you down in Super Puzzle Fighter II Turbo), napping with her cats, and cooking. She is passionate about art and coffee.

Theodore made her publishing debut in 2018 with her self-published novella THE BANTAM and her novel FLOTSAM, Book One of the Peridot Shift series.

Read about her writing process, find her on social media, and subscribe to her newsletter at rjtheodore.com.