Rebecca F. Kuang is joining us today with her novel The Poppy War. Here is the publisher’s description:

A brilliantly imaginative talent makes her exciting debut with this epic historical military fantasy, inspired by the bloody history of China’s twentieth century and filled with treachery and magic, in the tradition of Ken Liu’s Grace of Kings and N.K. Jemisin’s Inheritance Trilogy.

When Rin aced the Keju—the Empire-wide test to find the most talented youth to learn at the Academies—it was a shock to everyone: to the test officials, who couldn’t believe a war orphan from Rooster Province could pass without cheating; to Rin’s guardians, who believed they’d finally be able to marry her off and further their criminal enterprise; and to Rin herself, who realized she was finally free of the servitude and despair that had made up her daily existence. That she got into Sinegard—the most elite military school in Nikan—was even more surprising.

Because being a dark-skinned peasant girl from the south is not an easy thing at Sinegard. Targeted from the outset by rival classmates for her color, poverty, and gender, Rin discovers she possesses a lethal, unearthly power—an aptitude for the nearly-mythical art of shamanism. Exploring the depths of her gift with the help of a seemingly insane teacher and psychoactive substances, Rin learns that gods long thought dead are very much alive—and that mastering control over those powers could mean more than just surviving school.

For while the Nikara Empire is at peace, the Federation of Mugen still lurks across a narrow sea. The militarily advanced Federation occupied Nikan for decades after the First Poppy War, and only barely lost the continent in the Second. And while most of the people are complacent to go about their lives, a few are aware that a Third Poppy War is just a spark away . . .

Rin’s shamanic powers may be the only way to save her people. But as she finds out more about the god that has chosen her, the vengeful Phoenix, she fears that winning the war may cost her humanity . . . and that it may already be too late.

What is Rebecca’s favorite bit? 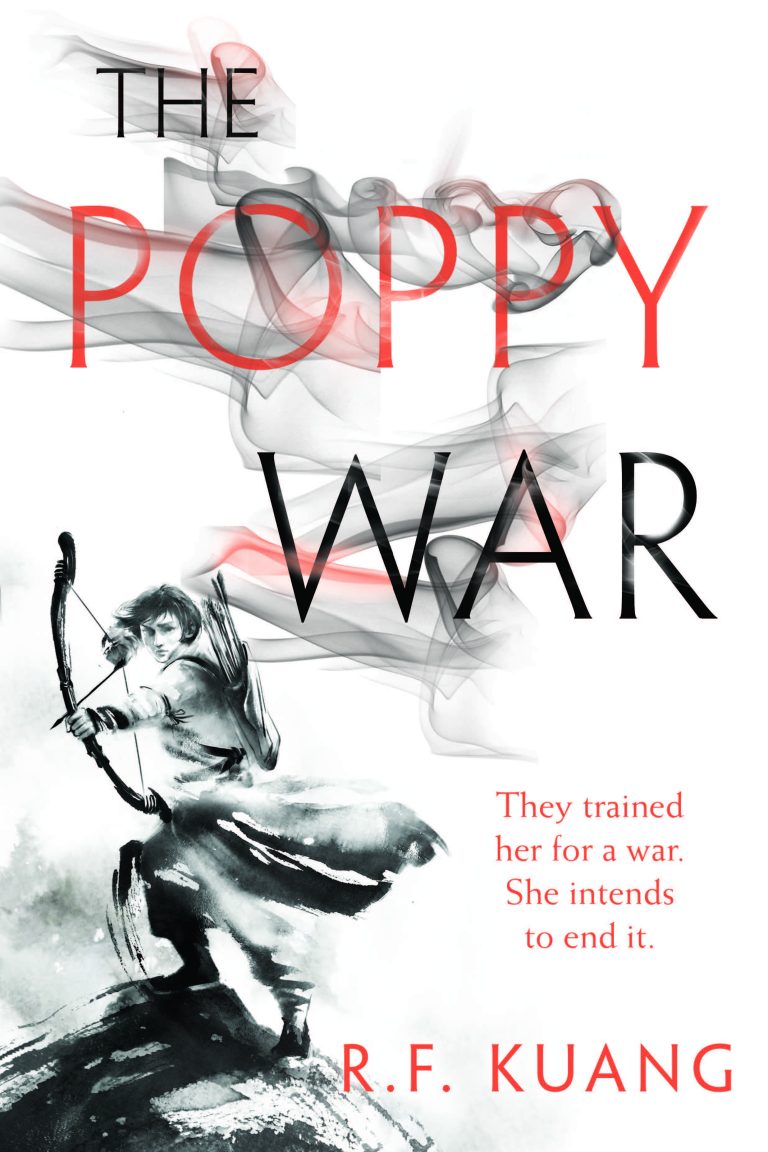 Halfway through the first act of The Poppy War, there’s a scene where the protagonist–Rin–gets her period for the first time. The cramps are awful. She’s living in a secondary world that mirrors Song Dynasty China, so she doesn’t have access to anything so convenient as tampons or diva cups. And she has some brutal martial arts exams coming up that she needs to pass if she wants to stay at the academy, so she really doesn’t have time for this shit.

Rin’s reaction, if you’ve met her, is predictably wild.

Rin reached the infirmary in a sweaty, bloody mess, halfway to a nervous breakdown. The physician on call took one look at her and called his female assistant over. “One of those situations,” he said.

“Of course.” The assistant looked like she was trying hard not to laugh. Rin did not see anything remotely funny about the situation.

The assistant took Rin behind a curtain, handed her a change of clothes and a towel, and then sat her down with a detailed diagram of the female body.

It was a testament, perhaps, to the lack of sexual education in Tikany that Rin didn’t learn about menstruation until that morning. Over the next fifteen minutes, the physician’s assistant explained in detail the changes going on in Rin’s body, pointing to various places on the diagram and making some very vivid gestures with her hands.

“So you’re not dying, sweetheart, your body is just shedding your uterine lining.”

Rin’s jaw had been hanging open for a solid minute. “What the fuck?”

I’ve always been a bit frustrated about how my favorite fantasy novels, most of them written by men, tended to hand-wave away the idea that a lot of the characters had uteruses, and that a lot of them were probably going through a monthly ritual of cramps, pain, and waves of blood. How the fork did they deal? Did they wear girdles? Did they stick some wadded-up leaves in there? You can’t exactly take period time off when you’re travelling the dirt road with your mercenary party, so do you just shut up and deal?

And what about fighting battles on your period? Period fatigue is a thing; every twenty-eight days, I’m barely able to crawl out of my bed. But the Lord of the Underworld doesn’t care about my  menstruation cycle. What’s a girl to do?

Here’s what Rin decides to do:

“There’s no way to just stop it forever?”

“Not unless you cut out your womb,” Kureel scoffed, then paused at the look on Rin’s face. “I was kidding. That’s not actually possible.”

“It’s possible.” Arda, who was a Medicine apprentice, interrupted them quietly. “There’s a procedure they offer at the infirmary. At your age, it wouldn’t even require open surgery. They’ll give you a concoction. It’ll stop the process pretty much indefinitely.”

“Seriously?” Hope flared in Rin’s chest. She looked between the two apprentices. “Well, what’s stopping you from taking it?”

They both looked at her incredulously.

“It destroys your womb,” Arda said finally. “Basically kills one of your inner organs. You won’t be able to have children after.”

“And it hurts like a bitch,” Kureel said. “It’s not worth it.” But I don’t want children, Rin thought. I want to stay here. If that procedure could stop her menstruating, if it could help her remain at Sinegard, it was worth it.

Hysterectomies are at tricky subject in popular culture. Often they reduce characters to their abilities to produce children. (“Oh, my god! I can’t have kids! My life is over.) And yes–for some people, infertility is devastating. For others, getting rid of your uterus can also be empowering. It’s a personal choice. Granted, it’s an extreme choice, but Rin is nothing if not extreme.

So there’s my favorite bit. I became a fantasy author solely to gripe about how much I hate getting my period, and how much I don’t want kids. Raise your diva cups and have a drink.

Rebecca F. Kuang studies modern Chinese history at Georgetown University, and will be pursuing her graduate studies at the University of Cambridge as a Marshall Scholar. She graduated from the Odyssey Writing Workshop in 2016 and the CSSF Novel Writers Workshop in 2017. She tweets at @kuangrf and blogs at www.rfkuang.com.