Today Michael J. Martinez joins us to talk about his new novel, The Venusian Gambit: Book Three of the Daedalus Series. Here is the publisher’s description:

In the year 2135, dangerous alien life forms freed in the destruction of Saturn’s moon Enceladus are making their way towards Earth. A task force spearheaded by Lt. Cmdr. Shaila Jain is scrambling to beat them there while simultaneously trying to save crewmember Stephane Durand, who was infected during the mission to Saturn and is now controlled by a form of life intent on reopening a transdimensional rift and destroying the human race. But Jain doesn’t realize that the possessed Stephane has bigger plans, beaming critical data to other conspirators suspiciously heading not for Earth, but for Venus…

In 1809—a Napoleonic era far different from our own—the French have occupied England with their Corps Eternélle, undead soldiers risen through the darkest Alchemy. Only the actions of Lord Admiral Thomas Weatherby and the Royal Navy have kept the French contained to Earth. But the machinations of old enemies point to a bold and daring gambit: an ancient weapon, presumed lost in the jungles of Venus.

Now, Weatherby must choose whether to stay and fight to retake his homeland or pursue the French to the green planet. And Shaila must decide if it’s possible to save the man she loves, or if he must be sacrificed for the good of two dimensions. In the dark, alien jungles of Venus, humanity’s fate in both dimensions hangs in the balance—forcing past and present to once again join forces against an ancient terror. 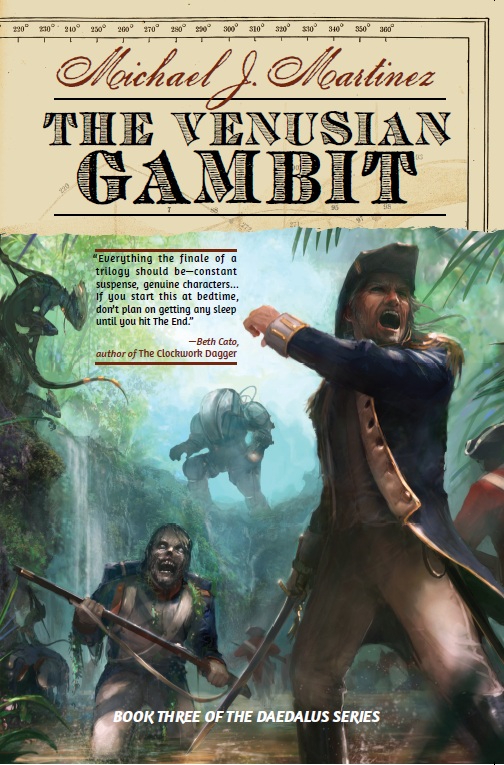 All those clichés about being a parent are true – it’s a tough job, but it’s the most rewarding thing I can possibly do. To see my daughter grow up into a very caring, loving, cool individual is the best thing ever, and all I can do is work hard to ensure I don’t mess that up.

The funny thing is, the fiction I grew up on really didn’t really reflect a parent’s perspective when it came to relationships. There’s a lot of stuff out there from the kid’s point-of-view – especially when said kid is rebelling against his or her parents, or one or both parents get fridged, sadly – but not much from the parent.

I have a lot of favorite bits in The Venusian Gambit, but there’s a father-daughter moment there that tops them all, because I think it reflects that mix of love, pride and worry that parents have when regarding their kids – especially when the kids do something brave or selfless.

On Venus, Lord Admiral Thomas Weatherby needs to convince the Venusian lizard-aliens (yep, just roll with it) to side with him against the French in 1809. However, he does not have the language skills to make the proper ritual introduction – one slip, and the Venusians will kill him where he stands.

His daughter, Elizabeth, has been encouraged from an early age to make the most of her mind, and is a self-taught expert in both the language and culture of alien species among the Known Worlds – including those of the Venusians. Naturally, she promptly volunteers to take her father’s place, even though the ritual requires personal blood-letting in addition to the proper verbiage.

As you might imagine, Weatherby immediately dismisses the notion of his daughter taking on such a dangerous task. Yet there’s nothing for it – she’s the best person for the job, and the most knowledgeable. It’s up to her to say the words, draw the blade across her hand and spill her blood to placate the Venusians – because not only is England itself at stake, but the entire multiverse as well.

Elizabeth understands the risks and the stakes, and she wants to do it. And Weatherby has no choice but to stand aside and allow her to make that terribly risky but incredibly important choice.

My daughter is only just turned 11, and naturally I’m working assiduously to ensure we can all avoid such life-and-death perils here in the suburbs. But I can see her grow up daily, making her own decisions to be kind, to be helpful, to pursue her interests as she sees fit. She’s even-tempered (as much as tweens can be), responsible and, I think, a genuinely good person. A father’s bias, perhaps, but I’m sticking to it.

So when Lord Weatherby watches Elizabeth make her way to the ritual circle, knife in hand, I may not be able to relate 100%, but I can certainly feel for him. There’s pride and terror and love, bound in a knot in his gut, and despite the stakes, his first instinct is to just take Elizabeth away from the danger – even if it means allowing Napoleon to win.

As a fellow father, I feel a bit bad for putting Weatherby through all that – as bad as I can feel regarding a fictional character of my own making, at any rate. But I also feel a lot of shared pride in Elizabeth’s intelligence and courage, in her ability to do the right thing despite the cost.

While I certainly hope my kid is never in such a precarious spot, life is going to throw curve balls at her. And while I highly doubt she’ll have to make choices involving blood-letting alien introductory rituals, I can only hope that I’m giving her the right stuff, whatever that stuff is, to make good choices.

So that’s my favorite bit among bits in The Venusian Gambit. I think we all want our kids to be safe and happy, but that’s not always going to be the case. All I can do, like Weatherby, is to raise a kid who’s going to do the right thing when the time comes.

Michael J. Martinez is the author of The Venusian Gambit, the final installment of the Daedalus trilogy, as well as other assorted bits of fiction. More importantly, he’s a husband and a dad. He can be found online at http://www.michaeljmartinez.net and on Twitter at @mikemartinez72.

3 thoughts on “My Favorite Bit: Michael J. Martinez talks about THE VENUSIAN GAMBIT”