Michael J. Martinez is joining us today with his novel The Daedalus Incident. Here’s the publisher’s description.

Mars is supposed to be dead…a fact Lt. Shaila Jain of the Joint Space Command is beginning to doubt in a bad way.

Freak quakes are rumbling over the long-dormant tectonic plates of the planet, disrupting its lucrative mining operations and driving scientists past the edges of theory and reason. However, when rocks shake off their ancient dust and begin to roll—seemingly of their own volition—carving canals as they converge to form a towering structure amid the ruddy terrain, Lt. Jain and her JSC team realize that their routine geological survey of a Martian cave system is anything but. The only clues they have stem from the emissions of a mysterious blue radiation — and, inexplicably, a 300-year-old journal that is writing itself.

Lt. Thomas Weatherby of His Majesty’s Royal Navy is an honest 18th-century man of modest beginnings, doing his part for King and Country aboard HMS Daedalus, a frigate sailing the high seas between continents…and the immense Void between the Known Worlds. Across the Solar System and among its colonies—rife with plunder and alien slave trade—through dire battles fraught with strange alchemy, nothing much can shake his resolve. But events are transpiring to change all that.

With the aid of his fierce captain, a drug-addled alchemist, and a servant girl with a remarkable past, Weatherby must track a great and powerful mystic, who has embarked upon a sinister quest to upset the balance of the planets—the consequences of which may reach far beyond the Solar System, threatening the very fabric of space itself.

Set sail among the stars with this uncanny tale, where adventure awaits, and dimensions collide! 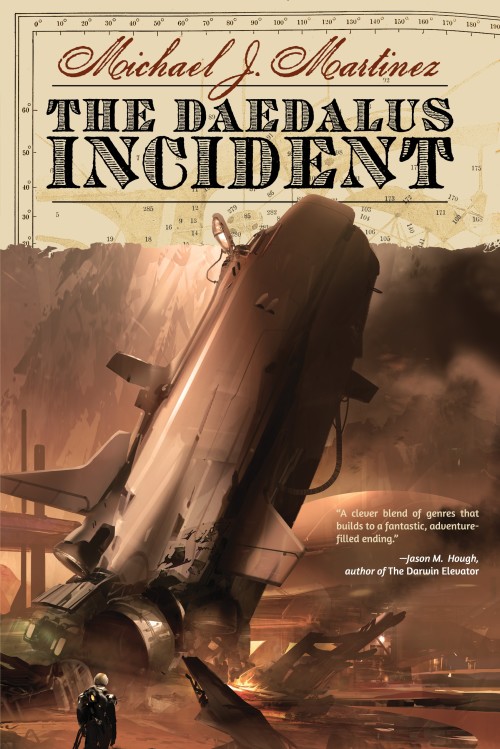 When you see a 300-year-old journal writing itself…well, you may need a moment.

My absolute favorite bit in THE DAEDALUS INCIDENT stems from that moment. It wasn’t something I was planning to talk about now, a week before the book’s print release, because it’s one of those great “reveals” that I wouldn’t want to spoil. But the marketers did it for me in the book description, which is right above this little essay, so I figure I might as well run with it.

The characters in the book are astronauts and scientists stationed at a backwater mining colony on Mars, in a future that could very plausibly look like our own – and certainly one in which journals don’t write themselves. Up until they witness this rather incredible event, they had many different theories as to what’s been going on around Mars – earthquakes, wild radiation events, the very ground sculpting itself into new shapes. Their theories to that point were at least scientifically possible, if not all that plausible. Even the discovery of the journal in the first place was chalked up to a very odd happenstance: Someone just up and brought an antique to Mars, then dropped it in a cave? OK, then. People can be weird like that, I guess.

But when they have that antique journal locked in a containment lab, and see the letters start appearing on the page without warning, as if by magic…they got nothing. No ideas, no theories, nada. In that moment, they’re lost.

And the journal’s writing describes a place – a universe, really – in which sailing ships from the 18th century ply the Void between planets.

My favorite bit comes from my characters’ very visceral, very unnerved reaction to all of that. I’ve read a decent amount of fantasy and science fiction over the years, and seen more on the big and small screens. And I got tired of seeing some wondrous, amazing, utterly impossible thing happen…and the main character’s response is to make a blasé quip or shoot at it.

In DAEDALUS, the characters see the letters appear, and just watch…and process…and tremble a little bit as the world they know gets completely, irrevocably upended. It takes time for them to wrap their heads around it. Even when even more bizarre things start to happen – up to and including a frigate crashing into the planet – they’re still trying to get a grip on their own feelings and emotions from that one key moment when life as they knew it changed forever.

That’s my favorite bit, because to me, it’s the most human one.

Michael J. Martinez has spent 20 years in journalism and communications writing other people’s stories. A few years ago, in a moment of blinding hubris, he thought he’d try to write one of his own. THE DAEDALUS INCIDENT is the result. Mike currently lives in northern New Jersey with his wonderful wife, amazing daughter and The Best Cat in the World. He’s an avid traveler and homebrewer, and since nobody has told him to stop yet, he continues to write fiction. He is a proud member of the Science Fiction and Fantasy Writers of America.