Today, I have a double-header for you. The editors of Queers Dig Time Lords, a collection of essays about Doctor Who by LGBTQ fans, have stopped by to tell you about what they love best about this anthology.

So let’s see what Michael and Sigrid’s Favorite Bits are. 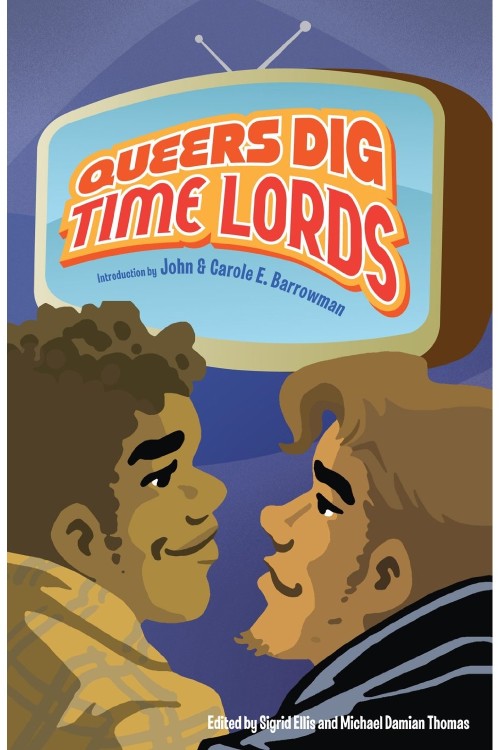 It’s extremely difficult for me to pick a favorite bit from Queers Dig Time Lords. My co-editor Sigrid Ellis and I brought together a diverse collection of voices and opinions about the television show Doctor Who from a variety of writers, actors, and fans. They represent many aspects of the LGBTQ community, and each brings a unique point of view about why the show is important to them. Some essays probe and analyze while others reminisce. Contributors argue and contradict each other about the innate queerness (or lack thereof) of Doctor Who and its characters. But there is one theme in the book that really is my favorite bit.

With a subtitle like A Celebration of Doctor Who by the LGBTQ Fans Who Love It, you should expect love. But the love in some of my favorite essays goes beyond just the love of a devoted viewer for a magnificent television series. Many of our essays are personal memoirs about how Doctor Who became an important part of people’s lives—tales of childhood, friendships, and discovery. As Paul Cornell once said, Doctor Who is a lifestyle.

Some tales of love involve the forging of lifelong friendships, such as Nigel Fairs’s essay about his relationship with Leela actress Louise Jameson. Others, like David Llewellyn and Neil Chester, wrote about the ways Doctor Who brought them closer to their parents. And finally, there’s romantic love. Emily Asher-Perrin tells a story of unexpected love through Doctor Who cosplay, Jason Tucker talks about coming out of the TARDIS to find a boyfriend, and Melissa Scott shares her glorious, heartbreaking story of finding the love of her life through love of the show and later losing her to cancer.

Many Doctor Who stories extol the virtues of this greatest of human emotions. I’m happy that so many of our essays did the same.

I have a few favorite bits in Queers Dig Time Lords.

There’s the bits that feel like staying up far, far too late in the hallway outside a convention’s consuite, talking past any sensible hour about archetype and motif and counter-theme and sex. (Because I have yet to hear an abstruse academic discussion past one o’clock in the morning that was not, on some level, about sex.) You’re sitting in a splash of one’s friends and newly-minted acquaintances, hands waving and voices probably a bit too loud, going on about camera angles and actors’ initiative and the collaborative nature of cultural creation. Amal El-Mohtar’s essay, “Sub Texts: The Doctor and the Master’s Firsts and Lasts” is one of these bits.

When the quotations start flying you know that the wine is nearly gone.

Then there are bits that feel like a great class, taught by that professor you might have a bit of a crush on if you had time to look at such feelings properly. It’s near the end of the term and your prof has decided to devote an hour to their favorite topic, the one they are currently writing a book about, and it’s all in-jokes and private references and you walk out feeling like you have never been so included before. “The Monster Queer is Camp,” by Paul Magrs is like this. So is Julia Rios’s “A Kiss from Romana.”

But my favorite, favorite bits might be the bits that feel like walking out of the nightclub and kissing your lover. There the two of you are, right there on the street, kissing in front of god and panhandlers alike. And it’s a kiss of joy, and lust, yes. But there’s a little bit of fear and a larger portion of rage than you might ever admit, because who would not find themselves angry to be afraid for such a kiss?

Susan Jane Bigelow understands this. So does Jennifer Pelland. So does Hal Duncan.

Those are my favorite bits of Queers Dig Time Lords.