Michael Cassutt and David Goyer’s first collaboration Heaven’s Shadow was a combination of a mystery and an action thriller set in space, but with our current levels of technology. Thanks to Michael’s work in non-fiction dealing spaceflight, there is a gritty reality to these books. The new one, Heaven’s War promises to do that boldly going thing we are so fond of.

When David Goyer approached me about working with him on an SF project that would involve human spaceflight, he thought he was getting a partner who was familiar with NASA vehicles, methods, personalities and jargon. Well, yes. But he was also getting a partner who was fascinated by the grim realities of travel in space. What does it feel like? What do you see and here? What does it do to your body? 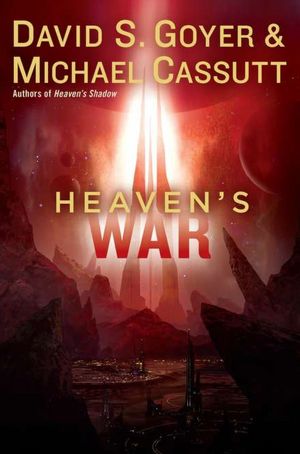 (If you have any interest in the subject, please find Mary Roach’s fascinating 2010 book PACKING FOR MARS.)

We had very few disagreements in writing HEAVEN’S SHADOW and its sequel, HEAVEN’S WAR, but those we had clustered in these moments, with me wanting to push the envelope a bit, and David offering a more tempered and nuanced perspective frequently found in the phrase, “That’s gross and I don’t think we want to say that in those words.”

For those of you who came in late, HEAVEN’S SHADOW is a near-future SF thriller in which two teams of competing astronauts land on a Near-Earth Object named “Keanu” and discover that this 100-kilometer wide planetoid is actually a starship that is inhabited by at least two alien races – and by a third set of creatures.

Now the obligatory SPOILER ALERT – avert your eyes, if necessary: these other creatures are re-born human beings who had ties to one or more of the visiting astronauts. How? Why? Check out HEAVEN’S SHADOW.

At the end of that book, some of our astronauts have escaped back to Earth, while one has been left to his fate.

But he is not alone. The great minds behind Keanu have launched space probes of their own targeting the Houston and Bangalore control centers for the competing exploration craft.

These probes, like NASA sample-returns, have scooped up soil, atmosphere AND DOZENS OF PEOPLE, returning them to Keanu.

In the early chapters of HEAVEN’S WAR, we see this voyage through the eyes of Xavier Toutant, a teenaged fry cook and pot dealer from Houston.

(One of My Other Favorite Bits about these books is the chance to populate a spacecraft with people who aren’t astronauts.)

For me, My Favorite Bit of HEAVEN’S WAR was living with Xavier as, terrified and ill, he flew from Earth to NEO in a giant bubble filled with unhappy people from Houston. Eventually he learned to make use of this time, looting the wreckage of an R.V. that was also scooped up, discovering a new life for himself as a scrounger.

Xavier Toutant was startled by the harsh voice behind him. After an hour of tugging and sweating, he had managed to pry open one of the jammed cabinets inside the back two-thirds of the big diesel Fleetwood Freightliner 2020 – not that he would have known the name, but it was plastered on the side of the recreational vehicle.

Now there was some other fool floating in here . . . white, thin, balding, midthirties, wearing a pair of slacks and a dress shirt that suffered some major distressing. Even in the shadowy interior, Xavier could see that this guy’s face was red and his eyes small and mean. “Ass eyes” was what his uncle Clare would have called them.

“I said, what are you doing in here?”

There were several possible responses, ranging from None of your fucking business to his usual noncommittal shrug. But Xavier had been upside down and dizzy and hungry for two days.

And he had watched this particular cracker lurking the RV for the better part of a day. So he said, “Same thing you are.”

A 19-tear-old wheeler-dealer goes to space and behaves badly. That’s my kind of SF.

In addition to considerable numbers of scripts for such television series as THE TWILIGHT ZONE, MAX HEADROOM, EERIE, INDIANA, THE DEAD ZONE and others, Michael Cassutt is the author of three dozen SF short stories and five solo novels: THE STAR COUNTRY (1986), DRAGON SEASON (1991), MISSING MAN (1998), RED MOON (2001) and TANGO MIDNIGHT (2003). He has also published several works of non-fiction dealing with human spaceflight, including the astronaut autobiographies DEKE! (Mercury astronaut Deke Slayton) and WE HAVE CAPTURE (with Gemini and Apollo astronaut Tom Stafford).

He and Michael Cassutt are collaborating on HEAVEN’S SHADOW (2011), HEAVEN’S WAR (2012) and the forthcoming HEAVEN’S FALL (2013). All three books have been sold to Warner as possible feature films, with Goyer scripting.