Max Gladstone is joining us today with his novel Two Serpents Rise. Here’s the publisher’s description.

In Two Serpents Rise by Max Gladstone, shadow demons plague the city reservoir, and Red King Consolidated has sent in Caleb Altemoc—casual gambler and professional risk manager—to cleanse the water for the sixteen million people of Dresediel Lex. At the scene of the crime, Caleb finds an alluring and clever cliff runner, Crazy Mal, who easily outpaces him.

But Caleb has more than the demon infestation, Mal, or job security to worry about when he discovers that his father—the last priest of the old gods and leader of the True Quechal terrorists—has broken into his home and is wanted in connection to the attacks on the water supply.

From the beginning, Caleb and Mal are bound by lust, Craft, and chance, as both play a dangerous game where gods and people are pawns. They sleep on water, they dance in fire…and all the while the Twin Serpents slumbering beneath the earth are stirring, and they are hungry. 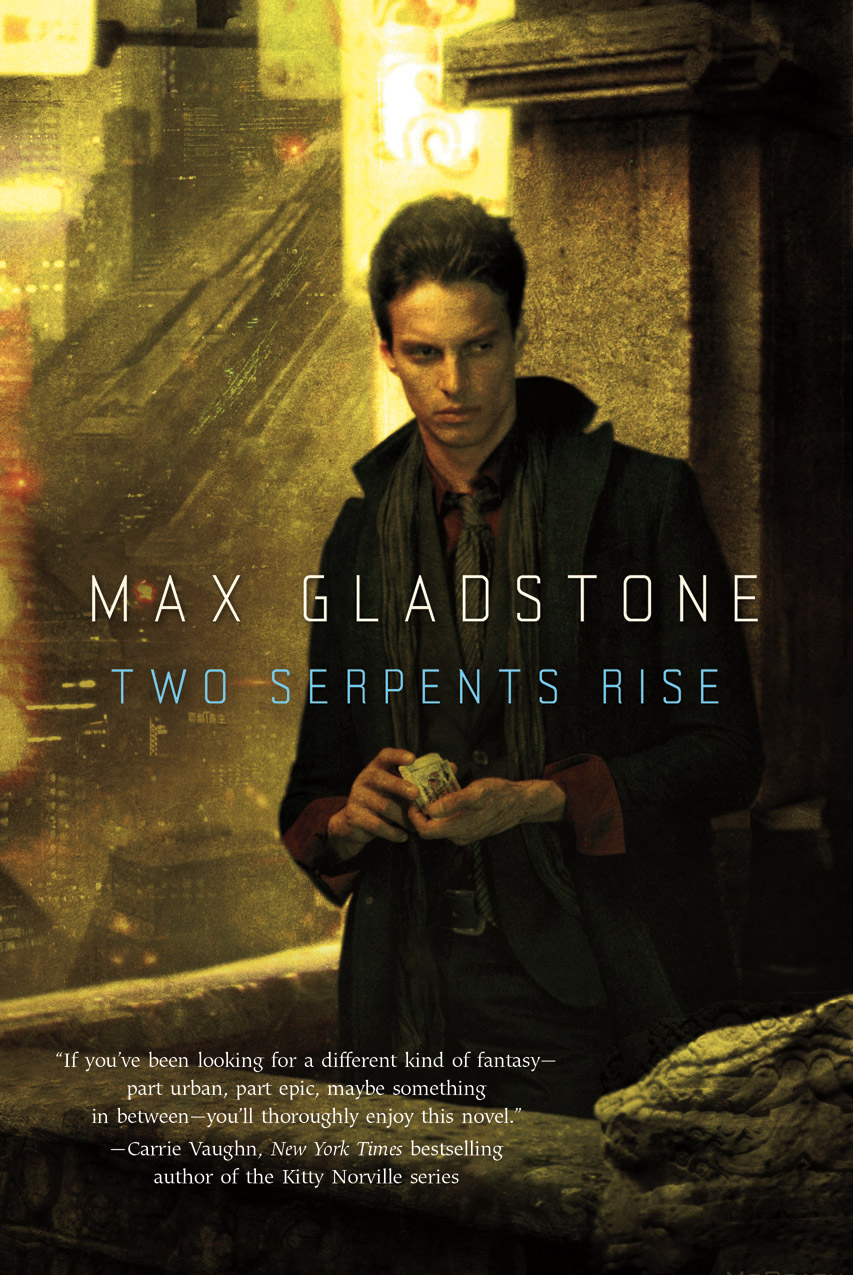 It’s good to have friends.

My books take place in a secondary fantasy analogue of our modern world—skyscrapers that fly, gods with market share, Hidden Schools that offer terminal degrees in necromancy.  My first novel, THREE PARTS DEAD, followed a junior associate at a necromancy firm trying to raise a dead god to stop a city from falling apart.  For this book, TWO SERPENTS RISE, I wanted to show a place where people banded together to kick the gods out long ago, and now live without them.  And so the city of DresedielLexwas born—a desert metropolis over which brood the pyramids of departed gods.

My main character, Caleb, is the son of a priestly family who’s turned from his roots to embrace a modern, post-divine life.  He works for the wizard who cast the gods fromtheir thrones and took their place as the provider of water to DresedielLex. Followers of the fallen gods are still around, though, trying to poison the city’s water supply—and Caleb must stop them.

In early stages of the book I had action, intrigue, and moral uncertainty.  But I felt something missing until I found Teo.

Teo is an old college classmate of Caleb’s, a coworker with an art gallery sideline into which she sinks the wealth her criminally rich family keeps trying to press on her.  She has a good life: a nice apartment she pays for herself, a radical artist girlfriend who drives her crazy in both good and bad ways, season tickets to the ball game, and a constant struggle to live a life apart from her overbearing family.  She doesn’t miss the gods.  She doesn’t miss the old world.  The current one works fine for her.

When I finally figured Teo’s character out, I felt something electric happen to the book.  She added levity and common sense, but also contrast. For her, the modern DresedielLexis a great place to live.  It’s her city, warts and all.  Her loyalty to that city—not to some dream of a future perfected republic, or to some memory of a bygone glorious era that wasn’t really so glorious as folk remember—brought the world into focus.

Plus, writing her felt awesome. Teo isn’t right about everything, but her utter self-confidence made a great jumping-off point.  She knows what she wants, she goes for it, and she’s not afraid to point out when other characters (especially Caleb) are behaving poorly.

I also liked that she and Caleb don’t sleep together.

Not that I have anything against romance!  But I feel weird when every friendship between characters of opposite genders in a book is assumed to have a sexual component.  Sex is awesome, but there are ways to be friends that don’t involve banging.

Friends help us figure out who we are.  Friends help us grow.  Friends pick us up when we fall.  Friends call us on our bullshit.  Friends live their own lives, and enrich us by that living.  I wanted a relationship between Caleb and Teo that reflected the best friendships I’ve known, and I think at least some of that made it to the page.

And that’s why Teo is my favorite bit of Two Serpents Rise.

Max Gladstone has been thrown from a horse in Mongolia and nominated for the John W Campbell Best New Writer Award.  Two Serpents Rise, his second novel, is about water rights, human sacrifice, dead gods, and poker.