I’m joining you today to talk about my novel The Calculating Stars. Here’s the publisher’s description:

On a cold spring night in 1952, a huge meteorite fell to earth and obliterated much of the east coast of the United States, including Washington D.C. The ensuing climate cataclysm will soon render the earth inhospitable for humanity, as the last such meteorite did for the dinosaurs. This looming threat calls for a radically accelerated effort to colonize space, and requires a much larger share of humanity to take part in the process.

Elma York’s experience as a WASP pilot and mathematician earns her a place in the International Aerospace Coalition’s attempts to put man on the moon, as a calculator. But with so many skilled and experienced women pilots and scientists involved with the program, it doesn’t take long before Elma begins to wonder why they can’t go into space, too.

Elma’s drive to become the first Lady Astronaut is so strong that even the most dearly held conventions of society may not stand a chance against her. 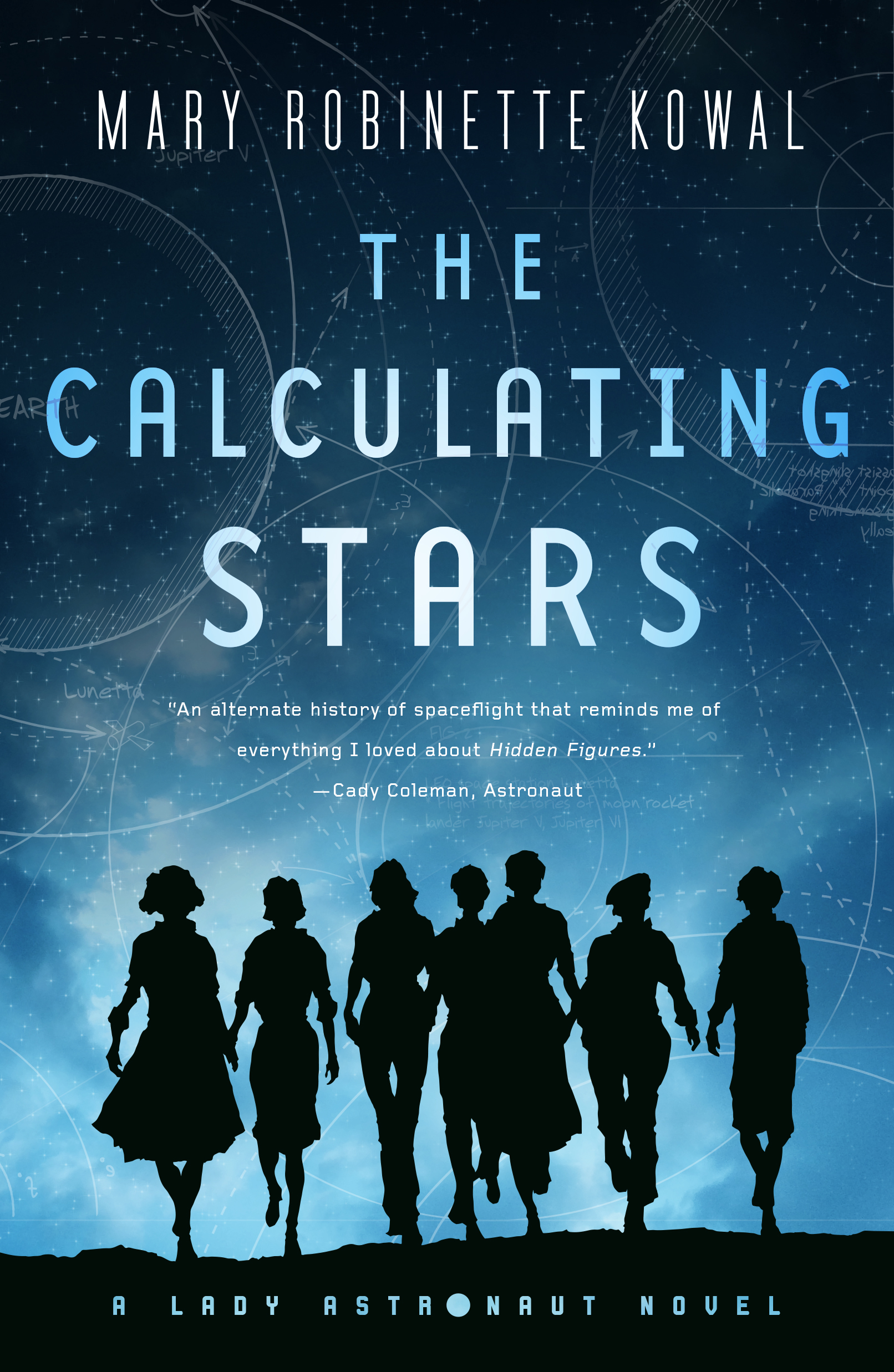 Given the frequency with which I ask other authors to talk about their favorite parts of their new novels, you might be wondering what my favorite bit of Calculating Stars is. Honestly, it’s the stuff I didn’t write.

See, it goes like this… I looked at all the things that I would need to know in order to write convincingly about orbital mechanics and said, “screw it! I’m hiring an expert.” Several experts, actually. But I’ll use this one as an example.

Stephen Grenade was my main science expert. He’s an ACTUAL rocket scientist. He also, luckily for me, got a degree in chemistry which came in really when Elma and her brother were trying to calculate how hot the meteorite was in order to make the Chesapeake steam. I’d found a website [http://www.chemteam.info/Thermochem/Thermochem-Example-Probs1.html] that had the equations for how to do it but I couldn’t even understand the math. All I had was that the total mass of water was 18 trillion gallons and an average depth of 21 feet.

Stephen wrote back this…

For the record, below is how I got that number. If you want to run it past someone else, please feel free. I’m also laying it out so I can double-check it later if needed.

The first thing we need to do is raise the bay’s temperature to 100°C. That’ll take an amount of energy given by (water’s mass)*(change in temperature)*(specific heat of water).

If the Chesapeake bay is 18 trillion gallons, that’s about 6.8E16 grams of water.

During March, the Chesapeake bay is around 7°C. So we need a temperature change of 93 °C.

Multiplying all of those together gives me 3.05E19 Joules of energy.

Now we need to boil that water to make it into steam. That’ll take more energy equal to (water’s mass)*(water’s heat of vaporization)/(water’s molar mass).

Water’s heat of vaporization is 40.7 kJ/mol.

Adding the two energies together, I get 1.84E20 J of energy.

T1 is 100 °C, assuming the asteroid would dump all of its energy into the water and end up at the same temperature as the water/steam, 100 °C.

All of this is makes me so geekily happy because I can follow it. I wouldn’t be able to generate any of that, but what I looooooved about working with him is that he wouldn’t just give me the answer, he would give me the thought process behind the answer. That, in turn, was something that I could gift to my characters.

So in the book, Stephen’s email became this…

I picked up the receiver and dialed my brother’s work number.

“Hey, it’s Elma. Got a minute for a weather question?”

“That is the literal definition of my job. What’s up?” Paper rustled on the other end of the line. “Planning a picnic?”

“Heh. No.” I pulled the equations I’d been working on closer. “I’m helping Nathaniel figure out how big the meteorite was, and composition and . . . The Chesapeake was steaming for three days. I could sort it out on my own, but . . . I thought there might be an existing equation for figuring out what temperature it would take to make a body of water that big steam.”

“Interesting. . . Give me a sec.” Beyond him, I could hear the Teletype bringing in reports from weather stations around the world. “You’ve got the depth and volume of water, I assume?”

“Okay. So . . . during March, the Chesapeake Bay is around forty-four degrees. So we’d need a temperature change of 199.4 . . .” A drawer opened, and the timbre of his voice changed as he pressed the phone to his shoulder.

I could picture him with the phone pressed between cheek and shoulder, brows creased as he worked the slide rule. His crutches would be leaning against the edge of his desk. His glasses would be down at the tip of his nose to help him focus better, and he’d have the corner of his lower lip tucked between his teeth, humming between muttered phrases. “. . . divided by water’s molar mass . . . and that gives me 1.54E20 J of energy . . . hm-hmmm . . . Adding the two energies together . . . hmmm . . . 1.84E20 J of energy. You’d need . . . It would need to be approximately 518 degrees.”

“Thanks.” I swallowed at the number and tried not to betray how much it frightened me. “You could’ve just given me the formula.”

“What? And admit that my kid sister is better at math than I am?” He snorted. “Please. I have an ego.”

There’s more stuff like that in the book, which makes it richer than I could possibly have done on my own. Besides Stephen, I also had two astronauts, two fighter pilots — one active duty and the other a Vietnam vet — a flight surgeon, an astronomer, and a ton of other people lending me their science knowledge.

Every time we had an email exchange, I would bounce up and down with giddy glee. It was fun. It was SO. Much. Fun.

Sometimes I would just send them passages that said things like,  “[More pilot jargon here]” and they would turn it into, “Wright Patterson tower this is Cessna four one six fox at one two thousand five hundred direct to the field.” (That one is from Derek “Wizard” Benkoski, by the way)

So there you have it. My favorite bit of Calculating Stars are the things I didn’t write.

The Calculating Stars Audiobook (read by me)

1 thought on “My Favorite Bit: Mary Robinette Kowal talks about THE CALCULATING STARS”