Please understand that I love Marie Brennan’s books. Loooooooove. Love. You know how sometimes you pick up a book and think, “Hey! This author wrote this book specifically for me!” The Memoirs of Lady Trent are like that for me. We have a smart, resourceful woman as the protagonist who is a naturalist specializing in dragons. So, right there? Awesome. Then you get immersed in a story that sits somewhere between the best golden age pulp you’ve read and a shocking memoir by the Dowager Countess from Downton Abbey.

I actually have a memoir from a mid-19th century actress who performed with John Wilkes Boothe and these remind me of that in a lot of ways. They feel utterly real. This is a secondary world fantasy, but it feels like reading something from the mid-1800s. These are glorious and swashbuckling and smart.

Oh! And Marie and I are touring together in May, so you can hear her read IN COSTUME and show dragon bones. And she’s good.

So. Now you know I like them. But what’s Marie’s favorite bit? 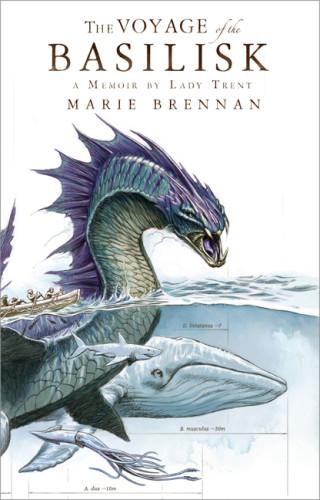 I sometimes think Mary should title this series “My Favorite Bit (That Isn’t a Spoiler).”

When I sat down to pick out my favorite bit from Voyage of the Basilisk, I had to discard the first three or four things I thought of, because they would give too much away. I would have to explain half the plot to give the element context, or the mere fact that I called out that detail would tell you it’s a lot more important than it looks at first glance. I guess that’s what happens when you try to pick a favorite bit out of the third book of a five-book series.

But here’s one I can share without too much trouble: Heali’i.

You see, I’m an anthropologist by training. And one of the things I decided to do, when I set out to write this series, was to incorporate cultural details of the sort that exist all over the world, but don’t often show up in fantasy. That’s why the second book of the series, The Tropic of Serpents, includes things like polygamy and matrilineality in the societies Isabella visits. I haven’t made a formal list, but I’ve got an informal one in the back of my head, and one of the things on that list was third gender.

Not every society divides people into male and female only. So if Isabella’s going all over the world, why not have her go someplace where there’s another option?

Now, when these issues come up, a lot of writers say they’ll include those things if there’s a reason for them, but they aren’t going to shoehorn those kinds of ideas into their stories just for the sake of having them there. (With the implication that doing so would be preachy and bad.) But I’m here to tell you that’s exactly what I did — and it turns out to be one of my favorite bits of the entire book.

For starters, I invented Heali’i: a character who is biologically male, but presents (to the eyes of the foreign visitors) as female, and occupies a position in Keongan society that isn’t quite either of those things. Figuring out the ideological underpinnings of the ke’anaka’i gender prodded me to come up with some mythology; I decided those people are considered to be “dragon-spirited,” and made up stories for what exactly that means. Thinking through the role ke’anaka’i play in society changed the dynamics of several events, and offered unusual solutions or plot twists at unexpected moments. By crafting the parameters of that gender to suit my purposes, I was able to catch Isabella in its net; this gave me an interesting angle from which to consider gender roles in her own culture, and her relationship with them. And having the Keongan people categorize her as ke’anaka’i instead of female made for a number of lovely little character moments with the people around her, who all react to it in different ways. (Those of you who have read the first two books may not be surprised to know Tom just starts laughing. In that “Oh god, you’ve outdone yourself now” kind of way.)

All of this came about entirely because I decided that writing about a third gender character might be an interesting thing to do. The story didn’t call for this idea; the idea called for a story. Following that thread made this whole book richer, and of the various people Isabella forms relationships with in her travels, Heali’i is one of my favorites.

All of which really only encourages me to do this more. In fact, I welcome suggestions in the comments: what kinds of things exist out there in the world, that you haven’t seen enough of in fantasy?

When she’s not obsessing over historical details too minute for anybody but her to care about, she practices shorin-ryu karate and pretends to be other people in role-playing games (which sometimes find their way into her writing).

7 thoughts on “My Favorite Bit: Marie Brennan on THE VOYAGE OF THE BASILISK”