M. Darusha Wehm joins us today to talk about her novel, Children of Arkadia. Here is the publisher’s description:

Kaus wants nothing more than to be loved while its human counterpart, Raj Patel, believes fervently in freedom. Arkadia, one of four space stations circling Jupiter, was to be a refuge for all who fought the corrupt systems of old Earth, a haven where both humans and Artificial Intelligences could be happy and free. But the old prejudices and desires are still at play and, no matter how well-meaning its citizens, the children of Arkadia have tough compromises to make.

When the future of humanity is at stake, which will prove more powerful: freedom or happiness? What sacrifices will Kaus, Raj, and the rest of Arkadia’s residents have to make to survive?

So what is Darusha’s favorite bit? 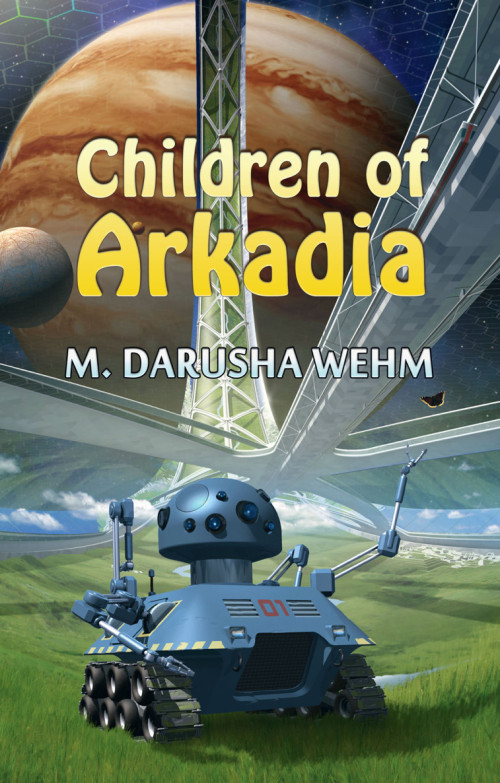 When I was about eight years old I had my future all figured out. After a couple of my classmates and I badgered our parents into taking us to the local museum for a talk on humanity’s future in space, I knew where I was going to be when I grew up. Not what I was going to do, exactly, but where I’d be doing it.

A Stanford torus, if I got my way, though I admitted that my friend’s preference for a Bernal sphere would be acceptable. I had no doubt that by the time the 21st century rolled around and I was officially old, I’d be living in a space colony.

Those were different times: it was before the Challenger disaster, before space exploration was considered a non-essential expense. The future was just around the corner and anything was possible.

It didn’t quite work out that way. It is, indeed, the greatest disappointment of my life that the enthusiasm and boldness of the speakers in that dusty museum basement room have been dampened by politics and economics.

Decades later, I wanted to write something full of big ideas, something that would make me think about a world I’d like to live in. Something that made me feel like I do when I look up into a sky full of stars on a moonless night. That’s how Children of Arkadia was born.

Writing this book was, at its most selfish, a way for me to live out my childhood dream. Yes, it’s the story of a utopia gone wrong and I can’t say that I would necessarily want to live in that particular society. But while I wrote it I got to imagine a better world, a place among the stars where instead of looking up to the sky, dreamers and children would look up at the homes and fields of their neighbours across the wheel. Where the need of human groups to expand and explore would be met without displacing anyone else. Where day-to-day life was a grand adventure.

As I lived among the characters of the book, as they built their home from a bare metal shell into a living, complicated ecosystem, I got to experience what they did. The fear and thrill of going somewhere and building something no one had ever done before. Of taking baby steps on a journey to other worlds. And that’s my favourite bit about Children of Arkadia.

I still believe that our destiny is among the stars. Spaceship Earth cannot be our only vessel if humanity is to survive. Sadly, I doubt that there will be ordinary people living full-time in space in my lifetime (though I’d be thrilled to be wrong). At least we can live there in our imaginations — and maybe stories like mine will help to inspire future generations to make these dreams come true.

M. Darusha Wehm is the three-time Parsec Award shortlisted author of the novels Beautiful Red, Self Made, Act of Will andThe Beauty of Our Weapons. Her next novel, Children of Arkadia (Bundoran Press), will be released April 28, 2015. She is the editor of the crime and mystery magazine Plan B.

She is from Canada, but currently lives in Wellington, New Zealand after spending the past several years traveling at sea on her sailboat. For more information, visit http://darusha.ca.