I’m going to get out of the way on this one and give you the publisher blurb because it does a better job of setting up the latest Nightrunner book, Casket of Souls, than I can.

The Nightrunners are back in this gripping novel full of Lynn Flewelling’s trademark action, intrigue, and richly imagined characters.

More than the dissolute noblemen they appear to be, Alec and Seregil are skillful spies, dedicated to serving queen and country. But when they stumble across evidence of a plot pitting Queen Phoria against Princess Klia, the two Nightrunners will find their loyalties torn as never before. Even at the best of times, the royal court at Rhíminee is a serpents’ nest of intrigue, but with the war against Plenimar going badly, treason simmers just below the surface.

And that’s not all that poses a threat: A mysterious plague is spreading through the crowded streets of the city, striking young and old alike. Now, as panic mounts and the body count rises, hidden secrets emerge. And as Seregil and Alec are about to learn, conspiracies and plagues have one thing in common: The cure can be as deadly as the disease.

And what is her favorite bit?

I have so many favorite bits in the latest Nightrunner book, Casket of Souls that it’s hard to narrow it down to one. Some of them would be spoilers, and others have to be taken in context. I got to return to the intrigue and debauchery of Rhíminee nightrunning, had my beloved Seregil do an impromptu striptease in a crowded gambling house, threw a birthday party for Alec. . . Oh yeah, just one. 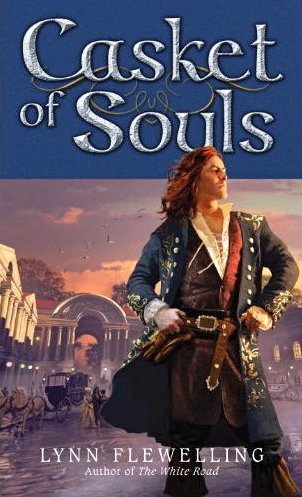 I was on an epic fantasy panel at Comic Con last month, and one of the audience members posed the question, “Who is your favorite character to write about?” That seems like a pretty straightforward, common, one word answer kind of question. But what I heard coming out of my mouth was “All of them.”

In Casket of Souls, as with all my books, I use multiple viewpoint characterization. So in the course of that book I wrote in the skin of not only my main and major secondary characters, and the villains, which is always delicious, but also did a few chapters about poor children who you never see again, but who really advance one of the plot threads. And I write those chapters with all the heart and attention I gave to Seregil or Alec or Thero.

When you’re writing a POV character, you have to be totally in the moment with them, totally inside their skin. I think that’s why multiple POV really delights me; you get to be so many people so deeply.

So— I have this little girl character and I have one rather brief chapter to make her real enough for the readers to care about her. She lives in the seaside slums of Rhíminee. She’s barefoot in a ragged hand-me-down dress. She’s dragging home a dead seagull nearly as big as she is (yes, I stole that from the end of A Christmas Carol). She looks into its shiny golden eye and wishes it was a bead she could wear, because she is so starved for anything beautiful in her precarious young life. In her tangled hair is a tiny blue bow, made from ribbon her mother found trampled in the street and lovingly washed and divided among her little daughters, a sad bit of prettiness in a drab and hopeless world.

I don’t know where all that came from. I had no idea any of that was going to flow out of my fingers onto the screen when I sat down to write that day. She just appeared when I needed her, and took on life because I was with her in an immediate state. I ached for that little girl, not only for her ultimate fate, but for the reality I’d just imposed on her, and what it said about poverty and classism in the Nightrunner world, and the real one. I live for moments like that in the writing process. So that’s my favorite bit.

Lynn Flewelling is the author of the Nightrunner Series and the Tamír Triad, as well as a number short stories and articles on writing. The first Nightrunner book, Luck in the Shadows, was publishes in 1996; the latest, Casket of Souls, is now on the shelves. Her short story “Namesake” recently appeared in the new shared world anthology, Tales of the Emerald Serpent, available in e book format.