Loren Rhoads is joining us today with her novel The Dangerous Type. Here’s the publisher’s description:

Set in the wake of a galaxy-wide war and the destruction of a human empire, The Dangerous Type follows the awakening of one of the galaxy’s most dangerous assassins and her quest for vengeance. Entombed for twenty years, Raena has been found and released.

Thallian has been on the lam for the last fifteen years.  He’s a wanted war criminal whose entire family has been hunted down and murdered for their role in the galaxy-wide genocide of the Templars. His name is the first on Raena’s list, as he’s the one that enslaved her, made her his assassin, and ultimate put her in a tomb. But Thallian is willing to risk everything–including his army of cloned sons–to capture her. Now it’s a race to see who kills whom first.

Alternatively, Gavin has spent the last twenty years trying to forget about Raena, whom he once saved and then lost to Thallian. Raena’s adopted sister, Ariel, has been running from the truth — about Raena, about herself and Gavin — and doesn’t know if she’ll be able to face either of them.

The Dangerous Type is a mix of military science fiction and an adventurous space opera that grabs you from the first pages and doesn’t let go. Along with a supporting cast of smugglers, black market doctors, and other ne’er-do-wells sprawled across a galaxy brimming with alien life, The Dangerous Type is a fantastic beginning to Loren Rhoads’s epic trilogy. 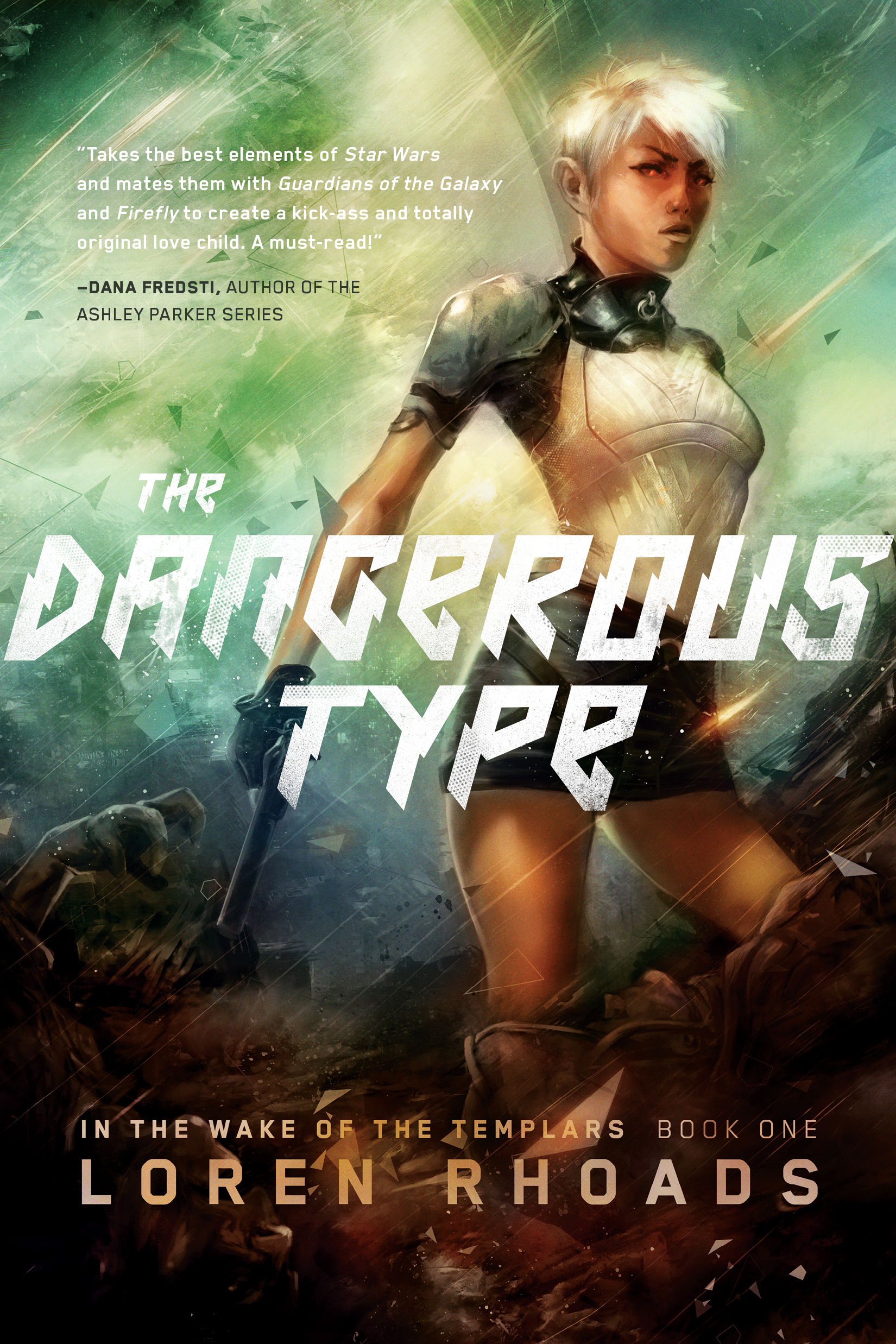 One of the things that fascinates me the most is persona.  I’m interested not only in the persons we present to the world as ourselves, but also in the identities our friends ascribe to us – and the gaps where those two don’t mesh.

Some of this dates back to high school, when I (like everyone else) tried to figure out who I was.  My friends seemed to assign roles to me.  I was a vixen.  I was in danger of becoming a drug addict.  Needless to say, I suppose, but I didn’t see myself reflected in either of those images.  It was just that my adventures didn’t always lie along the same avenues as theirs did.  It puzzled and amused me that the people who should have known me best sometimes didn’t seem to know me at all.  In that not-knowing, they invented someone else for me to be, someone I could choose to inhabit or to confound, as I liked.

The first book of my new trilogy looks at persona through the lens of point of view. From the outside, The Dangerous Type looks like a space opera.  Inside, it’s a study of the personas that lovers and ex-lovers create for the main character.

Even though Raena is the central character of the book, her point of view doesn’t appear until two-thirds of the way through the text.  Before that, the story unfolds through the eyes of people who knew her twenty years previous, before she was secretly imprisoned and seemed to vanish from the galaxy.  Some of these characters knew Raena well and some only briefly, but all of them overestimate her competence and strength, either by leaping to conclusions about her or by living vicariously through her or by simply wishing she was someone other than who she is.

Gavin Sloane tried to rescue Raena twice in the past – once for money and once for pride – but he’s never stopped looking for her.  Chief among the points of view, Gavin’s built a persona for Raena that she can’t possibly live up to, predicated on the less than twenty-four hours they spent together two decades earlier.  He’s researched her history and knows as much about the facts of her life as anyone, but without actually having had the time to know her, he’s created and interacted with her mostly in his mind.

Ariel Shaad calls herself Raena’s sister – and she contrived a legal adoption into the Shaad family for Raena after she’d disappeared– but in reality, Raena was purchased by Ariel’s dad to be a bodyguard.  The girls had real, deep affection for each other, but their relationship was never as equal as Ariel would like to remember, even if Ariel’s protectiveness for Raena is reciprocated.

Former Imperial diplomat Jonan Thallian took Raena as a teenager and molded her into an assassin to serve his agendas.  Jonan lives in a universe of his own imagination, where other people rarely become more than ghosts.  Raena was the only person to become real to him, albeit only after she ran away from him.  He believes she is his perfect creation, to be broken and controlled once he recaptures her.

Of course, Raena isn’t – and couldn’t be – any of those things.  She’s not a long-lost girlfriend or a rich girl’s sister or a killer goddess.  She’s just a woman with a very specific skill set in a deceptively girlish body, struggling to acclimate to an unfamiliar galaxy where everything she believed in, everything she thought was true, has been dismantled.  She’s trying to negotiate everyone’s expectations of her while keeping herself alive.

The book was inspired not just by my experiences in high school, but by continuing to interact with those same friends today.  I’m blessed to still consider myself friends with the people I knew back then.  We’ve been close, grown apart, gotten back together. We know each other’s stories so well that we assume we know each other well.  Still, the older I get, the more I realize that we (in the general sense) never really know anyone else.  I’m not even convinced we ever really know ourselves.  Instead, we create our friends out of what they say, what they do, how they make us feel.  We interact with them as if these imaginary people we’ve created are the people themselves – until stress or an unguarded word or even watching them interact with someone else makes us reassess.

I find this whole process of reassessment, the continual updating of the personas, riveting.  In the novel, all the characters who are holding up masks of their own try to hold up masks for Raena as well. Rather than being revealed, she ends up being hidden behind mask after mask after mask, until she finally finds someone who will listen when she begins to speak for herself.

Of course, this is all background.  The plot is something else altogether.  That’s where the space opera comes in…

Loren Rhoads is the author of The Dangerous Type, Kill By Numbers, and No More Heroes, the components of the In the Wake of the Templars trilogy. Night Shade will publish all three books in 2015.

2 thoughts on “My Favorite Bit: Loren Rhoads talks about THE DANGEROUS TYPE”