Lawrence M. Schoen is joining us today with his novel Barsk: The Elephants’ graveyard. Here’s the publisher’s description:

The Sixth Sense meets Planet of the Apes in a moving science fiction novel set so far in the future, humanity is gone and forgotten in Lawrence M. Schoen’s Barsk: The Elephants’ Graveyard

An historian who speaks with the dead is ensnared by the past. A child who feels no pain and who should not exist sees the future. Between them are truths that will shake worlds.

In a distant future, no remnants of human beings remain, but their successors thrive throughout the galaxy. These are the offspring of humanity’s genius-animals uplifted into walking, talking, sentient beings. The Fant are one such species: anthropomorphic elephants ostracized by other races, and long ago exiled to the rainy ghetto world of Barsk. There, they develop medicines upon which all species now depend. The most coveted of these drugs is koph, which allows a small number of users to interact with the recently deceased and learn their secrets.

To break the Fant’s control of koph, an offworld shadow group attempts to force the Fant to surrender their knowledge. Jorl, a Fant Speaker with the dead, is compelled to question his deceased best friend, who years ago mysteriously committed suicide. In so doing, Jorl unearths a secret the powers that be would prefer to keep buried forever. Meanwhile, his dead friend’s son, a physically challenged young Fant named Pizlo, is driven by disturbing visions to take his first unsteady steps toward an uncertain future. 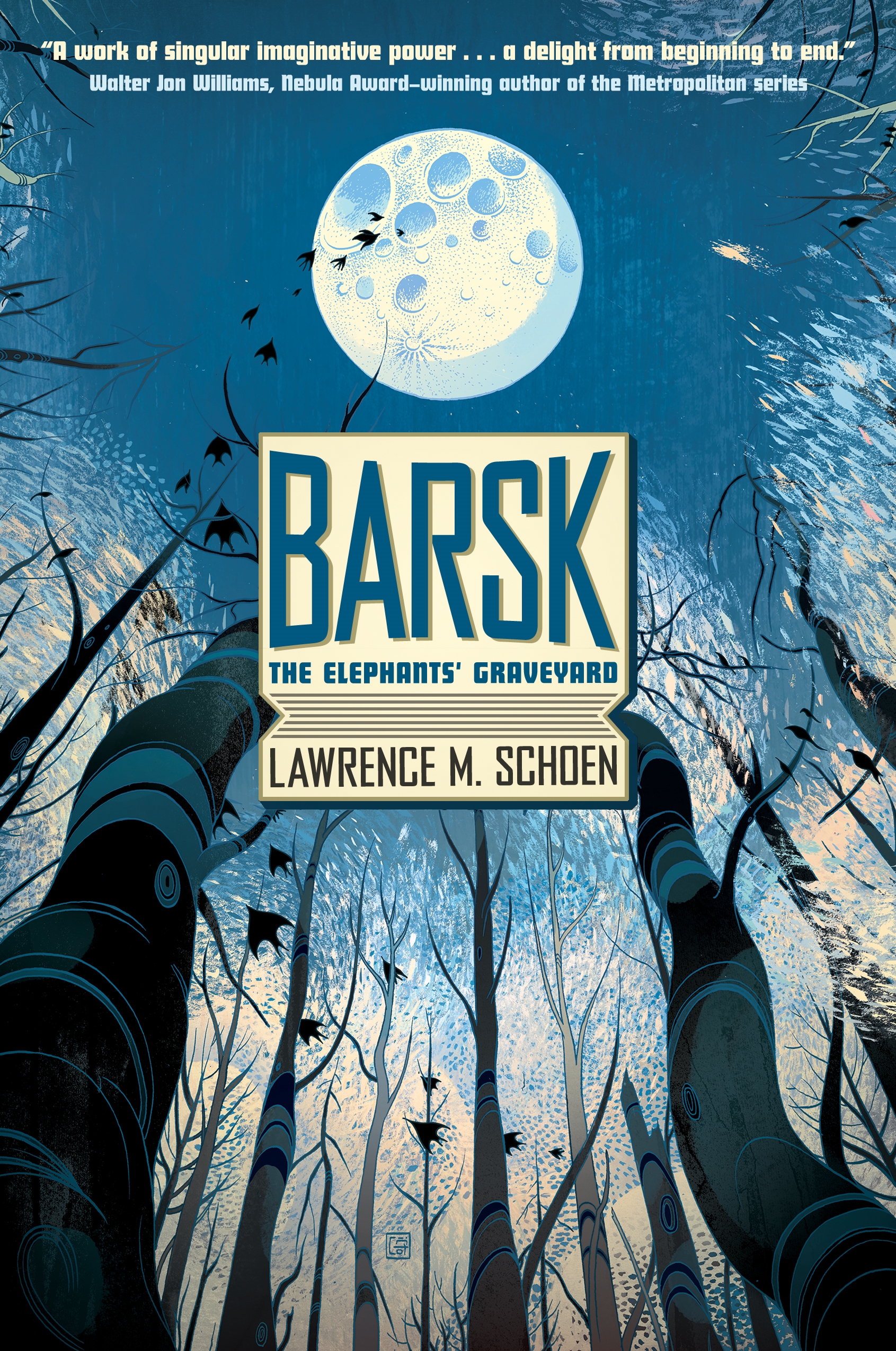 My favorite bit is probably the epilogue, which is almost unchanged from when I wrote it more than twenty years ago. But I can’t tell you why it’s my favorite bit because… Spoilers. So, I’ll share one of my other, still-very-cool-but-not-quite-as-favorite bits for purposes of this blog visit. But trust me, you will thank me for that epilogue when you get to it.

One of the main tropes in Barsk is that a life-long friendship can transcend even death. This is made considerably easier (and more plausible) by the presence of a drug that permits users to manipulate something I call nefshons, which are subatomic particles of memory and personality. The drug allows the user to summon the collected memories of people who have died and converse with them much as they would have in life, to effectively speak with the dead. That detail is a major feature of the book, and as such is more of a given than a spoiler. And it’s a critical thing for you to know if you’re to follow the (penultimate) favorite bit that follows.

You also need to know that my protagonist, Jorl, has been marked by his people with a bioluminescent tattoo of an aleph on his forehead. It’s a cultural thing, and it grants him a single perk: passage. No doors are closed to him, no queries barred from his asking. He can go anywhere he chooses. There may be consequences, but those will come later. In the moment, no one can bar his way.

Early in the book, Jorl realizes that to unravel an ancient prophecy (he’s an historian) he has to travel to the place all Fant go when they learn their death is at hand. One morning, typically in old age, each of them just wakes up to the certain knowledge that life is coming to its conclusion and a destination pops into their mind, and off they go. The Fant call this “sailing away.”

The only Fant who know where this “Elephants’ Graveyard” is are the people who are traveling there to die. It’s not on any map, and there’s no one around that Jorl can ask for directions because anyone who knows has already left and wouldn’t tell him anyway. The Fant are funny like that. When it’s your time, you’ll know, otherwise, sorry.

Jorl’s solution is to use his ability to speak with the dead. He summons his own father, Tral, and explains that he needs information to find the destination, the last place his father traveled to. Tral is less than helpful:

“It’s not for you to know. It’s not the sort of thing you know until it’s your time. And if it was your time, you’d know.”

“Ask me something else. Something I can tell you.”

“You can tell me, you’re choosing not to.”

Tral crossed his arms over his chest. His ears dropped defiantly. “You have a clear understanding of the situation. That’s good.”

“Being dead doesn’t relieve you of your culture. The bearer’s mark grants him passage. No doors can be closed to him. He’s free to go wheresoever he wills. That’s the law of Barsk!”

“Well, I choose to follow where you and other dying Fant have gone.”

Tral relaxed in the guest chair. The smile returned to his lips but his eyes had lost that joyous gleam. “Then go, boy. I’m not stopping you. Go ahead, sail off .”

“Then you’ll tell me where it is?”

“Of course not. I already told you I wouldn’t. You’re not stupid. You’ve never been stupid. Pay attention.”

Jorl slapped at his own forehead, the aleph’s glow faint, but steady. “You just said you weren’t stopping me!”

“And I’m not. But I’m not going to enable you either. That mark means you can go where you please and no one can hinder you. It doesn’t mean anyone else has to help you though. And I won’t.”

Maybe I’m projecting (and it wouldn’t be the first time), but there’s something quintessential about all father/son relationships that can be found in this scene. There’s a father’s pride in his child’s achievements, a son’s need to show that he’s an accomplished adult, a reminder that regardless of age or education or even death, a man is always his father’s son.

I never quite had this conversation with my own father, but I can remember plenty of others that were close enough and which surely inspired this one. When I wrote it, and now every time when I re-read it, I feel like I’m speaking with him again. It’s the closest I can come to manipulating nefshons and experiencing the joy and inevitable loving frustration of speaking with my father. He’s been gone sixteen years, but in writing up this blog piece, I’d swear he’s sitting across the table from me, smiling softly.

Lawrence M. Schoen holds a Ph.D. in cognitive psychology and psycholinguistics. He’s also one of the world’s foremost authorities on the Klingon language, and the publisher of a speculative fiction small press, Paper Golem. He’s been a finalist for the John W. Campbell Award, the Hugo Award, and the Nebula Award. Lawrence lives near Philadelphia. You can find him online at LawrenceMSchoen.com and @KlingonGuy.