Lancelot Schaubert is with us today to talk about BELL HAMMERS. Here’s the publisher’s description:

AND ONE HILARIOUS SIEGE OF A MAJOR CORPORATION.

Remmy grows up with Beth in Bellhammer, Illinois as oil and coal companies rob the land of everything that made it paradise. Under his Grandad, he learns how to properly prank his neighbors, friends, and foes. Beth tries to fix Remmy by taking him to church. Under his Daddy, Remmy starts the Bell Hammer Construction Company, which depends on contracts from Texarco Oil. And Beth argues with him about how to build a better business. Together, Remmy and Beth start to build a great neighborhood of “merry men” carpenters: a paradise of s’mores, porch furniture, newborn babies, and summer trips to Branson where their boys pop the tops of off the neighborhood’s two hundred soda bottles. Their witty banter builds a kind of castle among a growing nostalgia.

Then one of Jim Johnstone’s faulty Texarco oil derricks falls down on their house and poisons their neighborhood’s well.

“We need the world’s greatest prank. One grand glorious jest that’ll bloody the nose of that tyrant. Besides, pranks and jokes don’t got no consequences, right?” 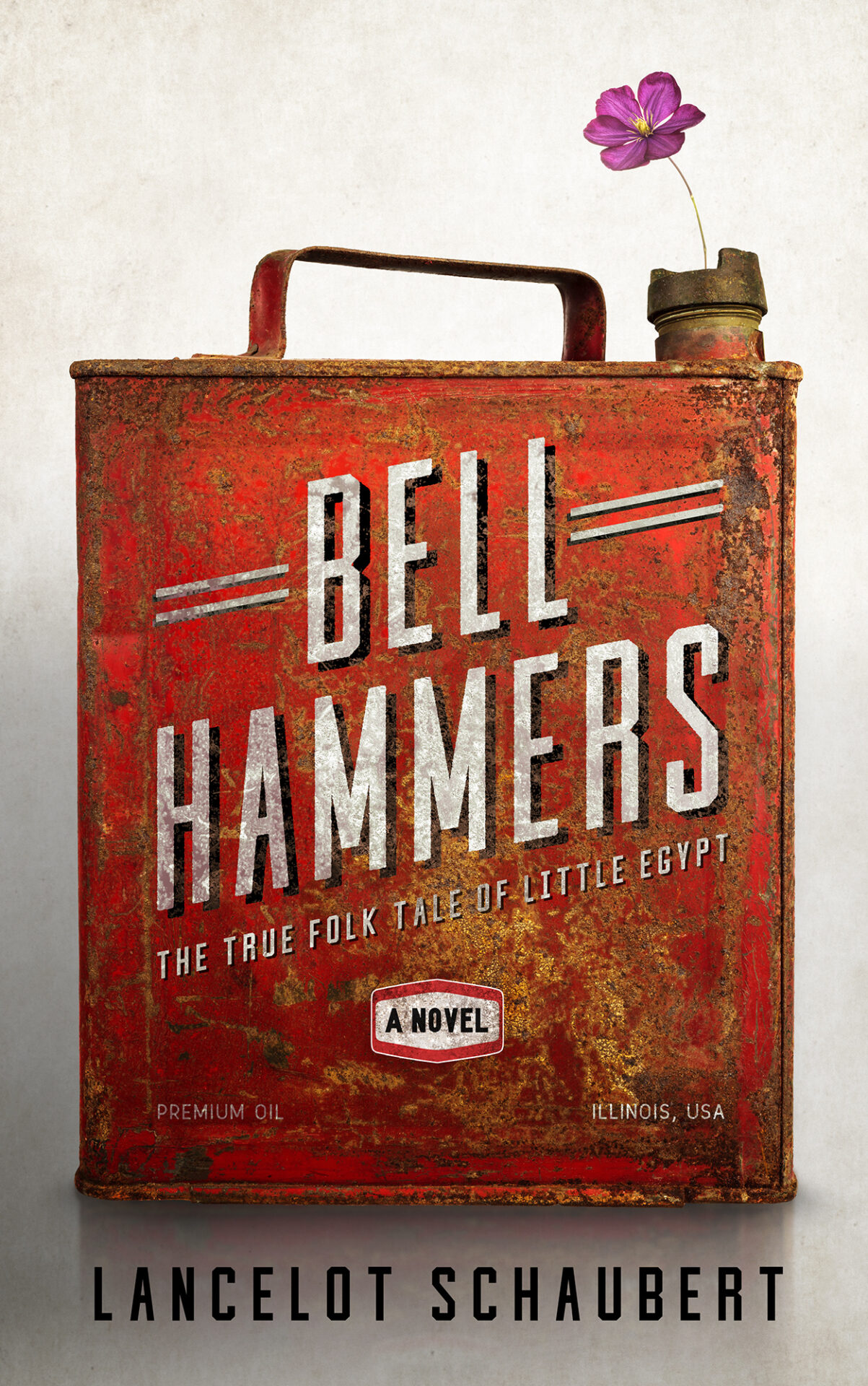 BELL HAMMERS emerged from the shadows the year I spelunked my family’s dark and hilarious secrets. I never intended to write historical fiction, but family secrets forced my hand. Like Mary Robinette, I devote most of my writing hours to the speculative fiction genres and so I have only ever intended to write and sell to literary markets under one subversive condition: my literary stories must take place in the same universe as my fantasy and sci-fi stories.

Weird dream, sure. But then I started recording my grandpas. And hilarious family secrets including their response to corporate exploitation came out. Funny and sober stories, twinned. Critics have since compared BELL HAMMERS to Mark Twain, John Kennedy Toole, Faulkner, Steinbeck, and some other humor novelists — I guess it makes sense for serious and funny authors both to incarnate my family’s history. I started interviewing them because I wanted to have a record of my grandpas and uncles, learn some life lessons, become a better man, and pay homage to the riverland — and culture — in a way I’ve yet to see in the bookstore. (In some small way, I sort of understand the #OwnVoices critique). That said, I did not expect to hear the phrase “we should have got an attorney” as often as I did. Nor to discover how royally both an oil company and a coal company had pilfered our region, crows on her corpse. Nor, frankly, to learn about the most complicated, wild practical jokes I’ve ever known: hilarious stories my grandpas lived, the poetry of life. 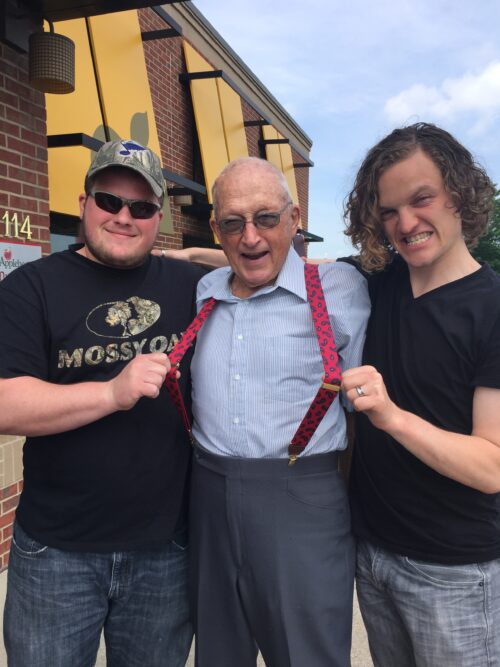 Today, I’ll share a few surprises from my research. In the last two years of BOTH of my grandpas lives, my bride Tara and I recorded as many conversations as we could. I’ve taken about twenty or thirty minutes from upwards of forty hours of audio with multiple family members to give you a taste of what this was like: apologies for the audio quality, but both grandpas died during the writing of this, my debut novel. I cannot rerecord them. Would that I could: I’d give the novel back just to have one more day with either right now.

You’ll hear first some stories on phone recordings with Grandpa Jerry — how his first telephone had been rigged up on barbed wire out in the country, how they rode into town on a horse and buggy (no car), how they crapped in an outhouse. Southern Illinois, midcentury, mind you. Reflect on the state of your own city around the 1950’s and you’ll start to glimpse how drastically our region got left behind. After that you’ll hear some pranks, a snippet of the night I cooked for all four of my grandparents the previous Christmas, and the last words Pawpaw Deno said to me before he died. Two words: Bloody Williamson. I found Paul Angle’s history book by that title. I’ve never understood the purpose of even semi-scholarly footnotes in a work of fiction until Angle’s book. It and both grandpas’s subtle hints started me on a journey into my family’s darker past as well as their bright, beautiful trickster responses to corporate evil: 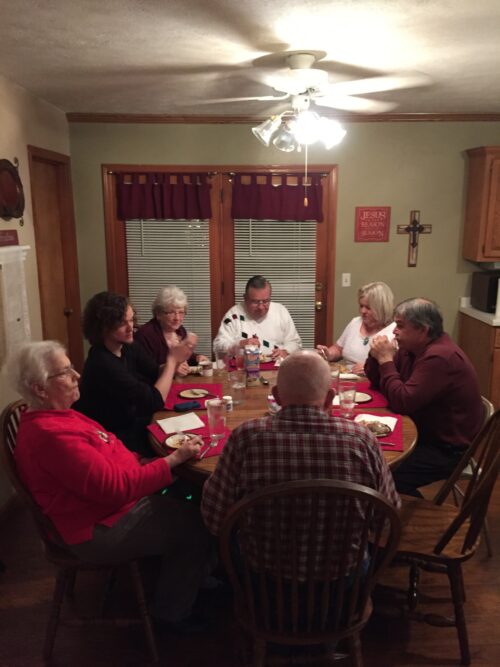 The grandad of my grandad? He handwrote letters to large companies. Here’s an excerpt from BELL HAMMERS that came from one of the interview sessions above:

Grandad Patrick wrote a lot of letters in those days. He said you needed to know how to write good letters in case you were ever serving as an ambassador or serving a prison sentence and specially if you were serving a prison sentence as an ambassador. Stationery ran him 10¢ a package, and he’d let Remmy help sometimes to practice his letters or at least he’d read them out loud while Remmy listened and Remmy would just laugh and laugh. He wrote Dodge Motors:

After trying your labumba of a car, I can say the only thing you Dodged is my next purchase.

And Dodge didn’t care none. They wrote Grandad Patrick right back:

Oh good. We were worried our reflexes were slowing.

Grandad Patrick bought a battery charger put out by General Electric just so he could return it and the warranty with a letter that said: Sorry, looking for a more specific charge.

But the best of all came from the letter he wrote Phillip Morris. He used to smoke Lucky Strike, and he switched for just one day to Marlboro Reds. After tasting them, he got pissed, and his Irish blood kicked in, and he got his letter writing stuff out and said, “Remmy get over here and watch at how it’s done by a professional. This is how you get what you want out of a big old mean company like Phillip Morris.”

With sincerity and great derision,

Remmy busied himself for a few weeks, waiting for the return letter from Philip Morris. He detassled some corn, cut up his hands doing it, and then he used a grinder on some old shelves for this old man’s tool shed, got all the rust off of them old steel shelves. He didn’t have to wait long, though.

“Remmy! Letter!” Grandad Patrick yelled at him one day through the front door of the mechanic shop Remmy was working inside. Remmy came out and looked over Grandad Patrick’s shoulder as the old man opened the letter.

You tried a cigarette we have made and accused us of filling it with horse shit and alfalfa. We naturally resent this remark: there’s not a damn bit of alfalfa in it.

That’s a real letter from Phillip Morris. I also found midcentury resource surveys penned by manufacturing, coal, and oil companies hidden in the Science, Industry, and Business branch of the New York Public Library. I think these surveys should be given back to the Southern Illinois communities these same corporations exploited in order to help rebuild institutional and generational memory among my people. Until that day I did the best I could to make a meager map: 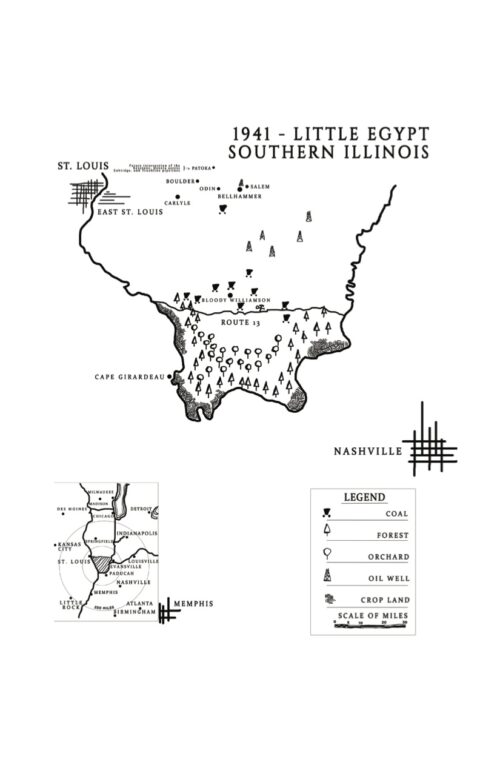 I found a way to tie BELL HAMMERS into my broader fantasy and sci fi universe, then sold excerpts. So now I have publication credits in The New Haven Review, The Misty Review, similar markets, and wrote a piece that became a finalist in Glimmer Train’s fiction open. All of these published BELL HAMMERS excerpts both illuminate family and regional history and take place in my fantasy universe. So the joke’s on the anti-genre literary crowd in the real world as much as on the robber barons in the novel. Thanks for joining today: I’d be tickled to death to mark you among BELL HAMMERS’ early readers — please read and let me know how to improve my follow up novel — I seek only to improve at my craft and love my work.

Two excerpts of Lancelot Schaubert’s debut novel BELL HAMMERS sold to The New Haven Review (Yale’s Institute Library) and The Misty Review, while a third excerpt was selected as a finalist for the last Glimmer Train Fiction Open in history. He has also sold poetry, fiction, and nonfiction to TOR, The Anglican Theological Review, McSweeney’s, Poker Pro’s World Series Edition, The Poet’s Market, Writer’s Digest, and many similar markets.

Spark + Echo chose him for their 2019 artist in residency, commissioning him to write four short stories.

He edits Of Gods and Globes which has featured stories by Juliet Marillier (whose story was nominated for an Aurealis award), Howard Andrew Jones, Kaaron Warren, Anne Greenwood Brown, Dr. Anthony Cirilla, LJ Cohen, FC Shultz, and Emily Munro. His work Cold Brewed reinvented the photonovel and caught the attention of the Missouri Tourism Board who commissioned him to write and direct a second photonovel, The Joplin Undercurrent.

He remains a committed husband to the grooviest girl on earth and is a public advocate for more free range trees. You know, Ents.