Keith R.A. DeCandido is joining us today with his novel A Furnace Sealed. Here’s the publisher’s description:

Bram Gold is a Courser, a hunter-for-hire who deals with supernatural creatures, mystical happenings, and things that go booga-booga in the night. Under the supervision of the Wardein—his childhood friend Miriam Zerelli, who is in charge of all magical activity in the Bronx, New York—he’s who you hire if you need a crazed unicorn wrangled, some werewolves guarded while they gallivant around under the full moon, or an ill-advised attempt to bind a god stopped.

The Bronx is the home to several immortals, who are notoriously hard to kill—so it comes as rather a surprise when one of them turns up murdered, seemingly by a vampire. In addition, binding spells all across New York are either coming undone, failing to work, or are difficult to restore. As Bram investigates, more immortals turn up dead, and a strange woman keeps appearing long enough to give cryptic advice and then disappear. Soon, he uncovers a nasty sequence of events that could lead to the destruction of New York! 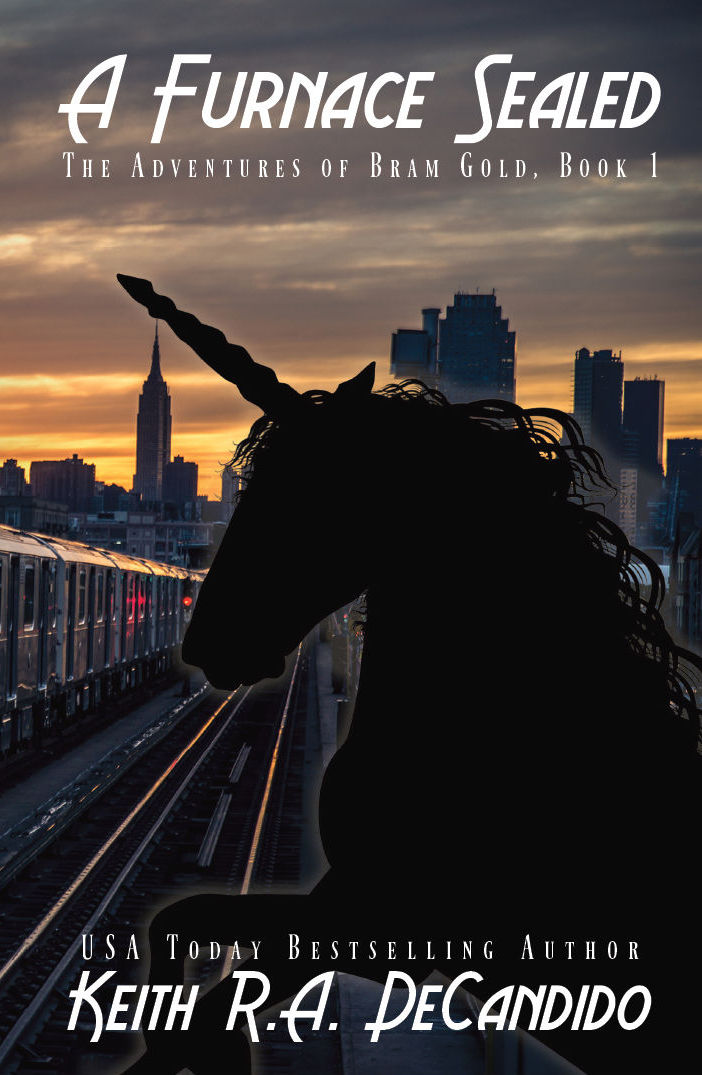 The trick with A Furnace Sealed, the first in The Adventures of Bram Gold, is that I don’t have a single favorite bit, but rather the whole notion of writing about my home town of New York City in general and my home borough of the Bronx in particular is one that appeals to me. I rarely pass up an opportunity to write a story set in the Big Apple, whether original or tie-in.

To be more specific, though, I love writing about the people here. The Bronx is one of the most fascinatingly diverse places you’ll find. In 2009 and 2010, I worked for the U.S. Census Bureau, and I got to see so many different places and things and people.

My favorite was going to a Buddhist monastery, located in an old two-story house on a side street near Kingsbridge Road. From the outside, it looked like just another house, but inside I was greeted by a wizened old monk and his acolyte. They gave me tea, and for half an hour, I felt like I’d been transported to a secluded region of Asia rather than the middle of the Bronx.

The team I supervised for the main Census operation included people who were from (or whose ancestry traced back to) western Africa, Haiti, the Dominican Republic, Korea, Cambodia, Trinidad, Puerto Rico, Cuba, Poland, Russia, Italy, and Ireland.

It was a joy and a privilege to be exposed to so many different cultures and points of view. And when I sat down to write A Furnace Sealed, I tried very hard to reflect that. The people in this book include the Jewish main character (Bram Gold), his Italian-American best friend (Miriam Zerelli), and lots of people from a variety of ethnicities and skin tones, including a wizard named José Velez, a magic shop run by someone named Ahondjon, with his nephew Medawe, and several of Bram’s fellow Coursers: Bernabe Iturralde, Hugues Baptiste, Sal Antonelli, Dahlia Rhys-Markham, and more. The four werewolves living in the Bronx spend the other 27 days of the month as humans named Anna-Maria Weintraub, Katie Gonzalez, Tyrone Morris, and Mark McAvoy.

While there are some neighborhoods in New York that default toward a particular ethnicity, even those have plenty of other folks living there—I myself am an Italian living in a mostly Irish neighborhood that also has a hefty number of dark-skinned folk from Central America and India—and most neighborhoods aren’t nearly that segregated. You’ve got folks all living mushed together ’round these parts, and it’s glorious. (It also occasionally results in culinary weirdness, like a Japanese-Cuban restaurant that I have yet to have had the courage to try.)

Variety, so the cliché goes, is the spice of life, and I for one prefer my life to be spicy. I tried to reflect that aspect of my home borough in this novel that takes place there.

None of that is really a favorite bit, so I’m just gonna close with this little bit of dialogue from Medawe, who helps his uncle Ahondjon run a magic shop on Jerome Avenue, talking with someone on the phone:

“Nah, he ain’t here,” Medawe was saying. Unlike his uncle, he was born in the Bronx, so he didn’t have Ahondjon’s thick West African accent. “It’s Sunday, he’s in church.… Nah, I ain’t telling you what church.… What, you telling me you found Jesus now? Bullshit. Just gimme the message, I’ll let him know when he gets back.… I don’t know when, I ain’t found no Jesus, neither. ’Sides, you know how he likes talking to folks. Could be hours.… Yeah, well, fuck you too.”

Shaking his head, Medawe pressed the end button on the phone.

“I need to talk to Ahondjon. He really in church?”

“Hell, no. Only time his ass goes into a church is to deliver their holy water.”

I blinked. “Wait, churches buy holy water from him?”

“They do if they want the shit that works.”

Keith R.A. DeCandido has written a ridiculous amount of fiction, or an amount of ridiculous fiction depending on your POV, for 25 years. His bibliography includes a metric buttload of media tie-in fiction in 35 different licensed universes from Alien to Zorro, as well as original novels and short stories set in the fictional cities of Cliff’s End and Super City and the somewhat real cities of New York and Key West. Recent and upcoming work, besides A Furnace Sealed, includes the Alien novel Isolation (which is partly a novelization of the same-named videogame, partly Ripley family backstory), Mermaid Precinct (the fifth novel in his acclaimed fantasy/police procedure series), four Super City Cops novellas (about cops in a city filled with superheroes), a graphic novel adaptation of Gregory A. Wilson’s Icarus, and short stories in the anthologies Unearthed, Brave New Girls: Adventures of Gals & Gizmos, Mine!: A Celebration of Freedom and Liberty For All Benefitting Planned Parenthood, They Keep Killing Glenn, Thrilling Adventure Yarns, Joe Ledger: Unstoppable, Nights of the Living Dead, both volumes of Baker Street Irregulars, and Release the Virgins!