caught me on the first page with the language. Kari Sperring has managed to create this… epic fantasy is not right. It’s a mythic fantasy, in that it feels like I was reading a story much, much older than it was, but it’s all original. It’s a novel that is very much about the power of language to shape things and in a book like that you need prose that is strong. Here you get strong, lyrical, and, at times, playful.

As it happens, her favorite bit is mine too.

“Sharp teeth gleamed in the low light. Then they were afoot and scrambling, tumbling from the tabletop to helter-skelter across the stone floor. Julana’s teeth snipped at her sister’s tail. Hooping in mid-air, Yelena twisted. Her claws snatched in Julana’s fur as she landed, and they rolled, locked about each other, over and over, tails lashing and teeth locked, until they came to a halt against a wall. Using her sister as her springboard, Julana leapt for a window-sill. Her front feet snagged its edge to hang in sudden slow time. Yelena jumped for her tail, and Julana dug in her claws. One effort of shoulders, and she was up, out of reach.” 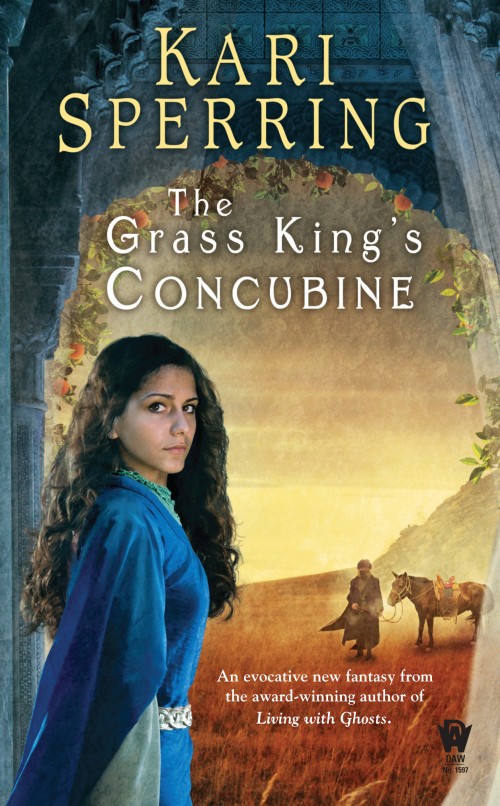 . I’ve lived with this book so long that its woven itself into me. There are passages I love, because writing them was such fun, images that have haunted me for years, things I researched and discovered along the way that made me clap my hands in delight – the history of printing, the astronomical water clock, the trees made of mica. But if I had to settle on just one thing, it would be my ferret woman, the shape-shifting twins Yelena and Julana. They were the first piece of the book to come to me, one afternoon back in, I think, 2002, when I found myself reaching for the nearest scrap of paper and scribbling down, “They were not witches.”

For a long time, that was the first line of the book (it’s now the first line of chapter 2, for various reasons). It made me smile every time I opened the file, because, to me, it said so much about who Yelena and Julana are. They sprang into life with that phrase, short and sharp and, sadly, very smelly, all teeth and noses and curiosity. At the beginning of the book, they are living in exile in a place called the Stone House, to which they have been banished by their overlord, the Grass King. The Stone House is a gateway to his domain, WorldBelow and they are supposed to protect it.

They aren’t very good at this. As they would say, it’s not what they were designed for. They were designed to find out, to steal, to bite and hunt and play and wreak havoc. All they want is to return to WorldBelow and find Marcellan, the human they protected against the Grass King’s anger. So they work a piece of sympathetic magic, to draw help to them.

Except, of course, that they aren’t witches. They don’t really know what they’ve done or the effects it might have. That spell has consequences that they could not have imagined (and, to be fair, that they probably don’t care about. They don’t have the longest attention span), both for WorldBelow and for the human realm of WorldAbove.

The novel’s heroine, Aude, is kidnapped by the Grass King’s bodyguard, who believe she is responsible for what the twins have done. Jehan, Aude’s husband, follows her, with the twins as his companions. It’s a little like trying to climb a strange mountain with somebody else’s badly trained dog. You have company and a guide, of sorts, but you can never be quite sure what might happen next or what trouble you might find yourself into – or how you’ll get out of it again. It was a little like that for the writer, too, as they filled out my landscapes and notions with their own particular approach to reality.

By nature, the twins are ferrets, though they learn to take on human shape so they can talk to Marcellan. They bite, they steal, they get into everything, and they take over every scene they’re in. Their voices were loud in my head – questioning, rhythmic, prone to repeating to each other their favourite pastimes and memories. I learned to count in ferret (it has to do with feet) and to see what they saw – not the colours and facilities first, but the corners that need to be investigated, the things that can be played with or stolen, the things that are good to eat or chase, the things that are sharp or hot or smell bad. I even got to write a water fight.

They’re the thread that binds the book together. It’s told in two strands – the story of Marcellan what happens to him in WorldBelow, and the story of Jehan and Aude trying to work out what has gone wrong in both worlds and how to set it right. The twins wind through both stories, watching, plotting, guiding, frustrating and, yes, biting. They break things and reshape them, create problems and hold clues. They play and prod and push the other characters along. I love them. I hope readers will enjoy them too.

Kari Sperring grew up dreaming of joining the musketeers and saving France, only to find they’d been disbanded in 1776. Disappointed, she became a historian and as Kari Maund published six books and many articles on Celtic and Viking history, plus one on the background to favourite novel, The Three Musketeers (with Phil Nanson). She started writing fantasy in her teens, inspired by Tolkien, Dumas and Mallory. The Grass King’s Concubine (DAW 2012) is her second novel. Her first, Living with Ghosts, was published by DAW in 2009.

She’s been a barmaid, a tax officer, a P.A. and a university lecturer, and finds that her fascinations of all kinds feed and expand into her fiction. She’s currently at work on two novels at once, because she needs more complications in her life.

1 thought on “My Favorite Bit: Kari Sperring talks about The Grass King’s Concubine”