Kameron Hurley is joining us today with her novel Empire Ascendant. Here’s the publisher’s description:

Loyalties are tested when worlds collide…

Every two thousand years, the dark star Oma appears in the sky, bringing with it a tide of death and destruction. And those who survive must contend with friends and enemies newly imbued with violent powers. The kingdom of Saiduan already lies in ruin, decimated by invaders from another world who share the faces of those they seek to destroy.

Now the nation of Dhai is under siege by the same force. Their only hope for survival lies in the hands of an illegitimate ruler and a scullery maid with a powerful – but unpredictable –magic. As the foreign Empire spreads across the world like a disease, one of their former allies takes up her Empress’s sword again to unseat them, and two enslaved scholars begin a treacherous journey home with a long-lost secret that they hope is the key to the Empire’s undoing.

But when the enemy shares your own face, who can be trusted?

In this devastating sequel to The Mirror Empire, Kameron Hurley transports us back to a land of blood mages and sentient plants, dark magic, and warfare on a scale that spans worlds. 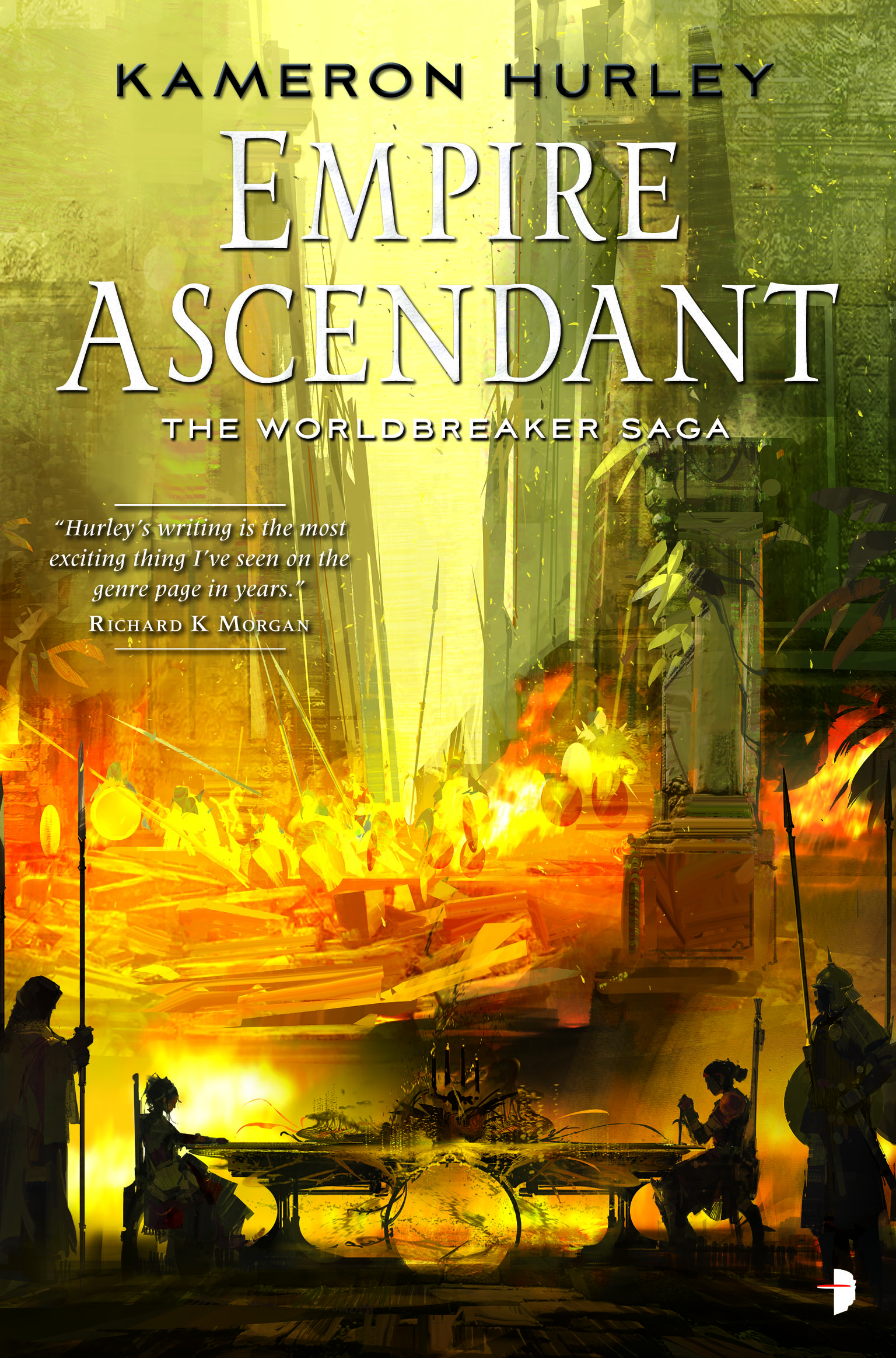 During a recurring catastrophic event, a multiplicity of parallel worlds collide, and in the end, only one world can survive the encounter. The other will perish.

But who gets to choose which one?

That’s the conceit behind The Mirror Empire and its sequel, Empire Ascendant. I’ve already written about my favorite part of The Mirror Empire. When it came to the sequel, I had another type of scene I was working toward, right from the very beginning.

Ultimately, this is a book about coming together. About meeting our darker selves. Our darker halves. It’s finding out if and how we could come to an agreement with them, or if we would choose to obliterate someone identical to us for wrongs committed in desperation. It’s seeing who we are when we are left with only bad choices.

My favorite part of Empire Ascendant is the climactic scene I came up with when I began this, the second novel in the trilogy: it’s the symbolic meeting of the worlds over a vast feast laid out on a battlefield, set between the tumultuous stir of two great armies while the satellites in the sky shift unpredictably overhead.

The war they are waging for the world is at a standstill. They have come to a temporary ceasefire while they parley. It’s their last ditch effort to save themselves from further bloodshed and heartache.

Here, finally, the enemies that have seen one another only from afar, and perhaps only know of one another in the abstract, must face what they are actually doing.  They must see that they have committed themselves to genocide.

We see the enemy. And the enemy is ourselves.

It was this epic feast, this coming together of armies while the world burns around them, that also became the inspiration for the blazing cover of the book.

I loved coming up with the food for this scene, too, which spoke of beginnings, of new life amid the flames – the early spring fare, all plant-based, as suited my vegetarian cannibal heroes. And I loved finally employing some destructive, poisonous plant shenanigans, which were sorely lacking in a book inhabited by giant semi-sentient plants.

It’s scenes like this, when all of your plotting and planning, your years of hard work and character studies, come together over a dangerous dinner wedged between two armies, that all the effort seems worth it.

Now they just need to decide what to do next.

Kameron Hurley is the author of The Mirror Empire and Empire Ascendant, as well as the award-winning God’s War Trilogy. She has won the Hugo Award, Kitschy Award, and Sydney J. Bounds Award for Best Newcomer. Hurley has also been a finalist for the Arthur C. Clarke Award, Nebula Award, the Locus Award, BFS Award, the Gemmell Morningstar Award and the BSFA Award for Best Novel. Her short fiction has appeared in Lightspeed Magazine, Year’s Best SF, EscapePod, The Lowest Heaven, and the upcoming Meeting Infinity.