Jim is one of those very smart people who not only writes good books, but also understands how the industry works. He looks at the larger picture around him and that shows up in his fiction, too. I should tell you that I basically read Libriomancer in one sitting and came away with feeling three things.

And now, here’s Jim to talk about what his favorite thing in the book is. Mine would involve a spoiler. 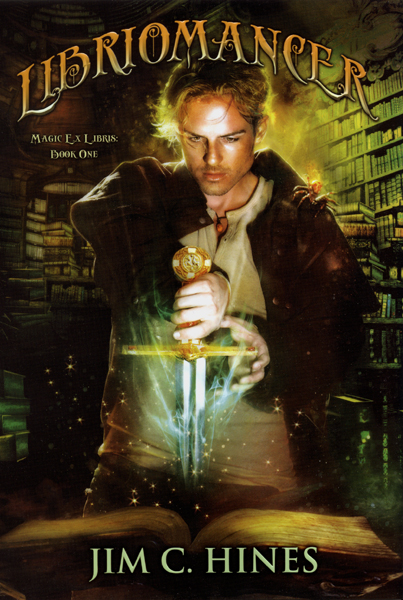 I would love to talk about my favorite bit from Libriomancer. Unfortunately, my very favorite part of the book starts on page 267, toward the climax of the story, and I’m not smart enough to figure out how to describe it without spoiling various plot points.

This particular scene encapsulates everything I love about the book and the protagonist: magic-wielding librarian Isaac Vainio. It shows his love of magic, his need to explore and push the boundaries, and his sense of wonder and discovery … even as nigh-invulnerable bad guys are busy trying to crush his head.

It’s a scene I almost didn’t include, because it’s not “normal” for a quasi-urban fantasy novel. I fully expect it to bump a few readers out of the story. My editor even asked if I was sure about keeping the scene. (She also gave me some suggestions for making it fit a little better. Gotta love a good editor!)

But I think for many of us, for those of us who share Isaac’s insatiable desire to ask “What if…?” and to seek out the answers no matter where they might take us, it will be a lot of fun.

Since I can’t get into the details, I’ll just say I hope you love it as much as I did, and talk about one of my runner-up favorites instead.

Libriomancy is the magic of pulling things from books, everything from laser pistols to magical spiders. As long as enough people have read and loved the book for their collective belief to make things “real,” you can create anything that fits through the pages.

This can create problems, of course. Untrained or careless libriomancers can reach into a book and accidentally (or deliberately) get themselves bitten by various species of vampire, for example, thus bringing the monsters into the real world.

Yes, even the sparkling ones.

In the early part of the book, Isaac is pursuing a vampire through the steam tunnels of Michigan State University. The vampire has been stealing books from the magical archives hidden beneath the library. Unfortunately, the vamp in question turns out to be unlike any Isaac recognizes – and he’s read a lot of vampire books.

They fight, and at first Isaac’s magically-created pistols give him the advantage. But the vampire dissolves into mist and surrounds Isaac. A hand materializes from the cloud, twisting the gun away. The vampire solidifies and slams Isaac into the wall, pulling a knife with his other hand. Isaac reaches for another book, but the vampire isn’t about to let him read it.

Fortunately, there are a few books whose magic Isaac can touch without rereading the text. Books he’s loved for so long, and read so many times, he can see the pages in his mind. Stories that shaped his play and his dreams as a child:

My fingers sank through the paper into hot desert air. The fingers of my hand closed around the end of a metal tube. I shifted my grip, allowing the book to drop away. I flipped a switch, and a glowing blade thrummed magically to life.

My first swing severed the vampire’s arm at the elbow. His knife clanged against the ground. I ducked low, taking his legs off with the backswing. He hissed and began to dissolve into mist.

I stepped to the side, studied the pipes for a moment, and slashed through the lower one. Hot steam blasted down, directly onto the mist. He reformed a few seconds later, dragging himself out of the steam with his remaining arm.

Like the scene I can’t talk about, this one also touches on love. Love of story, of imagination, and of magic. Not to mention giving Isaac a moment to act out the kind of fantasy most of us have had ever since we first saw a set of films set a long time ago in a galaxy far, far away.

I can’t wait to share the book – and that love – with my readers.

Jim C. Hines is a level 6 geek, multiclassed as a writer and customer support person. He generally wears leather thieves’ armor (with 39 hidden pockets for everything from bookmarks to a sonic screwdriver) that gives him a +2 armor class bonus. He took blogging as a bonus feat and recently spent some skill points in Sanchin-Ryu karate, earning a black belt that gives +3 to roughhousing with his two children. He also put points into juggling and yo-yo tricks, because juggling and yo-yos are cool. He gets an automatic penalty to all encounters with goblins, who still haven’t forgiven him for everything he put them through in his GOBLIN QUEST trilogy. Jim is worth 350 XP. Roll on Treasure Chart F to determine what he will be carrying. For complete character stats or to read the first chapter of LIBRIOMANCER, please check out www.jimchines.com.