J. Dalton Jennings is joining us today with his novel Solomon’s Arrow. Here’s the publisher’s description:

It’s the mid-twenty-first century. The oceans are rising, the world’s population is growing, terrorist organizations are running rampant, and it has become readily apparent that humanity’s destructive nature is at the heart of the matter.

When all faith in humanity seems lost, a startling proposal is announced: Solomon Chavez, the mysterious son of the world’s first trillionaire, announces that he, backed by a consortium of governments and wealthy donors, will build an interstellar starship—one that will convey a select group of six thousand individuals, all under the age of fifty, with no living relatives, to a recently discovered planet in the Epsilon Eridani star system. His goal is lofty: to build a colony that will ensure the survival of the human race. However, Solomon Chavez has a secret that he doesn’t dare share with the rest of the world.

With the launch date rapidly approaching, great odds must be overcome so that the starship Solomon’s Arrow can fulfill what the human race has dreamed of for millennia: reaching for the stars. The goal is noble, but looming on the horizon are threats nobody could have imagined—ones that may spell the end of all human life and end the universe as we know it.

Filled with action, suspense, and characters that will live on in the imagination, Solomon’s Arrow will leave readers breathless, while at the same time questioning what humanity’s true goals should be: reaching for the stars, or exploring the limits of the human mind? 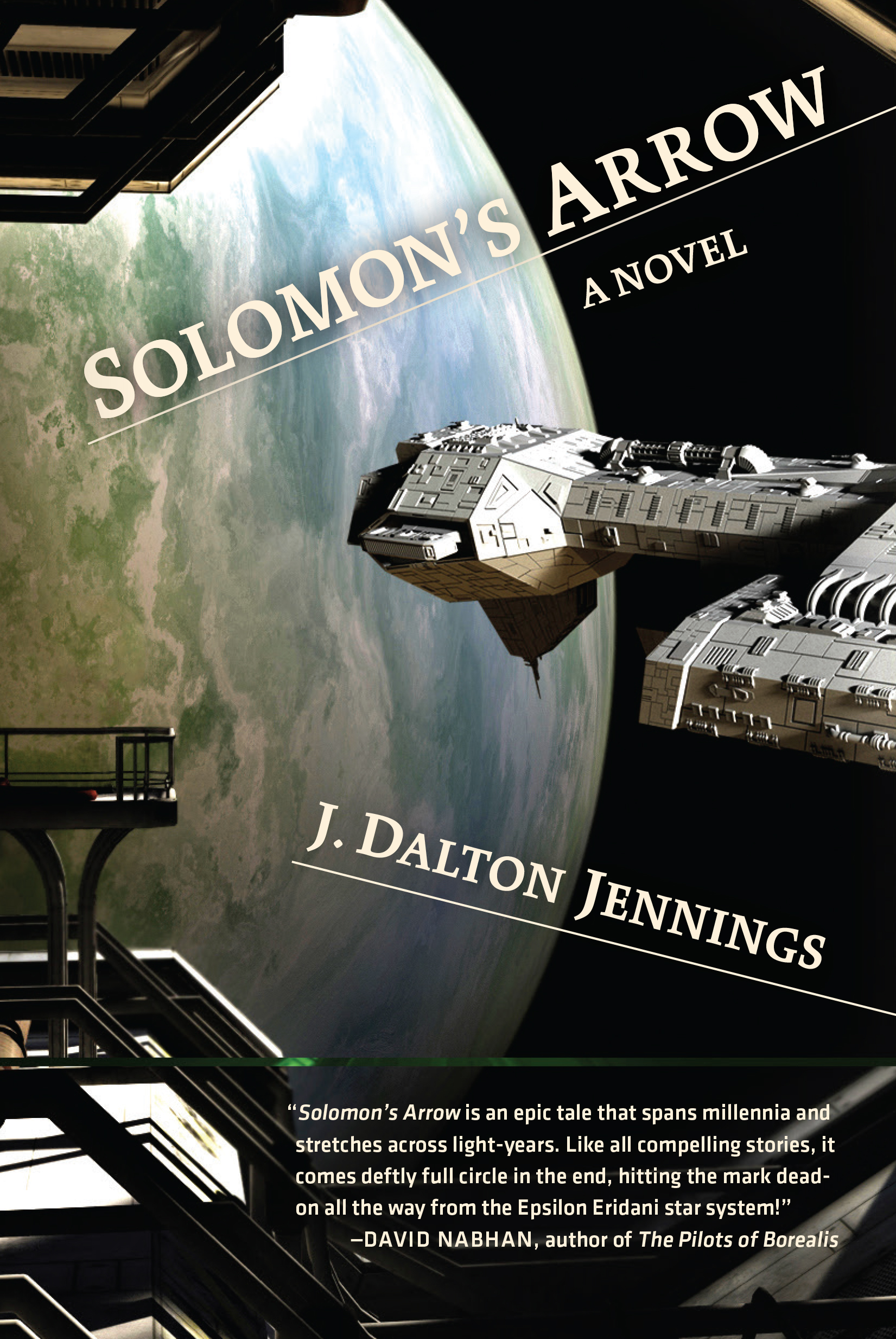 Like any writer worth his salt, virtually every part of my novel, Solomon’s Arrow, can be called My Favorite Bit. The trick, however, is to write about one of my favorite bits in such a way as to prevent the story arc from being spoiled for those who have yet to read the book, while casting light on that same bit for those who have.

With that in mind, the bit I’ll be blogging about takes place three nights before the much-heralded launch of humanity’s first interstellar starship, Solomon’s Arrow. A going away party—hosted by the mysterious Solomon Chavez—is being held for a number of VIPs, who are among the colonists leaving Earth in a matter of days. Bram Waters, one of the novel’s chief protagonists, is scheduled to arrive the following morning; however, after receiving a message informing him that his request to meet Solomon Chavez has been refused, he reschedules his overseas flight to arrive early, just in time for the party. The kicker is, upon his arrival at the party he’s unable to provide an invitation and is refused entrance. But then, to his great relief, along comes Floyd Sullivant, head of security for Solomon’s Arrow. The two were teammates on a joint mission with Canadian Special Forces to capture the person responsible for a terrorist plot. Seeing Bram’s predicament, Floyd invites him to the party—as his plus one. Some humorous banter ensues as they enter the ballroom.

In the background, a band is playing a song made famous in the Big Band era. The song is “Sing, Sing, Sing,” by Benny Goodman, and is one of Solomon Chavez’s favorites; the song also provides a clue to the mystery that surrounds him.

While listening to the music and sipping drinks at the bar, Floyd spots Solomon Chavez conversing with a group of people on the far side of the ballroom and asks Bram if he would like to be introduced to the enigmatic industrialist. Bram readily agrees. Strangely enough, the introduction is laced with tension; and for some unknown reason, Solomon refuses to shake Bram’s hand. He can sense the man is loath to be around him, which Bram finds both confusing and offensive. Being psychic, he senses there is much more to Solomon Chavez than meets the eye; and yet, despite his curiosity, he holds back from exploring the matter deeper. Bram has a code of ethics, which the reader learns about earlier in the book that prevents him from doing so. He explains this to Solomon and the man reluctantly provides a quick handshake.

Another individual in the group—who, coincidentally, was also a member of the mission with Bram and Floyd—is Gloria Muldoon. She breaks the tension by asking Bram to escort her to the bar. Bram is more than willing to oblige her request, seeing as Gloria is an intelligent, resourceful, beautiful woman—albeit one with a famously cold demeanor. However, she’s drawn to Bram and soon opens up to him, which gives the reader a glimpse into her tragic past. Bram is also no stranger to tragedy. This shared bond, along with their mutual attraction, sets in motion a relationship that proves instrumental to the rest of the story.

Is this bit the most exciting or important one in Solomon’s Arrow? No, but it is one of my favorite bits; it contains humor and tension and provides an important turn in the lives of two of the novel’s key characters. After all, isn’t that what a favorite bit should entail?

J. Dalton Jennings is a retired graphic artist who served for six years as an avionics technician in the Arkansas Air National Guard.Solomon’s Arrow is Jennings’s first published novel, and he currently resides in North Little Rock, Arkansas.