Ellen Datlow is joining us today with her book The Best Horror of the Year Volume Seven. Here’s the publisher’s description:

A sin-eater plies the tools of her dangerous trade; a jealous husband takes his rival on a hunting trip; a student torments one of his teachers; a cheap grafter is selling artifacts form hell; something is haunting the departure lounge of an airport . . .

For over three decades, award-winning editor and anthologist Ellen Datlow has had her finger on the pulse of the latest and most terrifying in horror writing. Night Shade Books is proud to present the seventh volume in this annual series, a new collection of stories to keep you up at night. 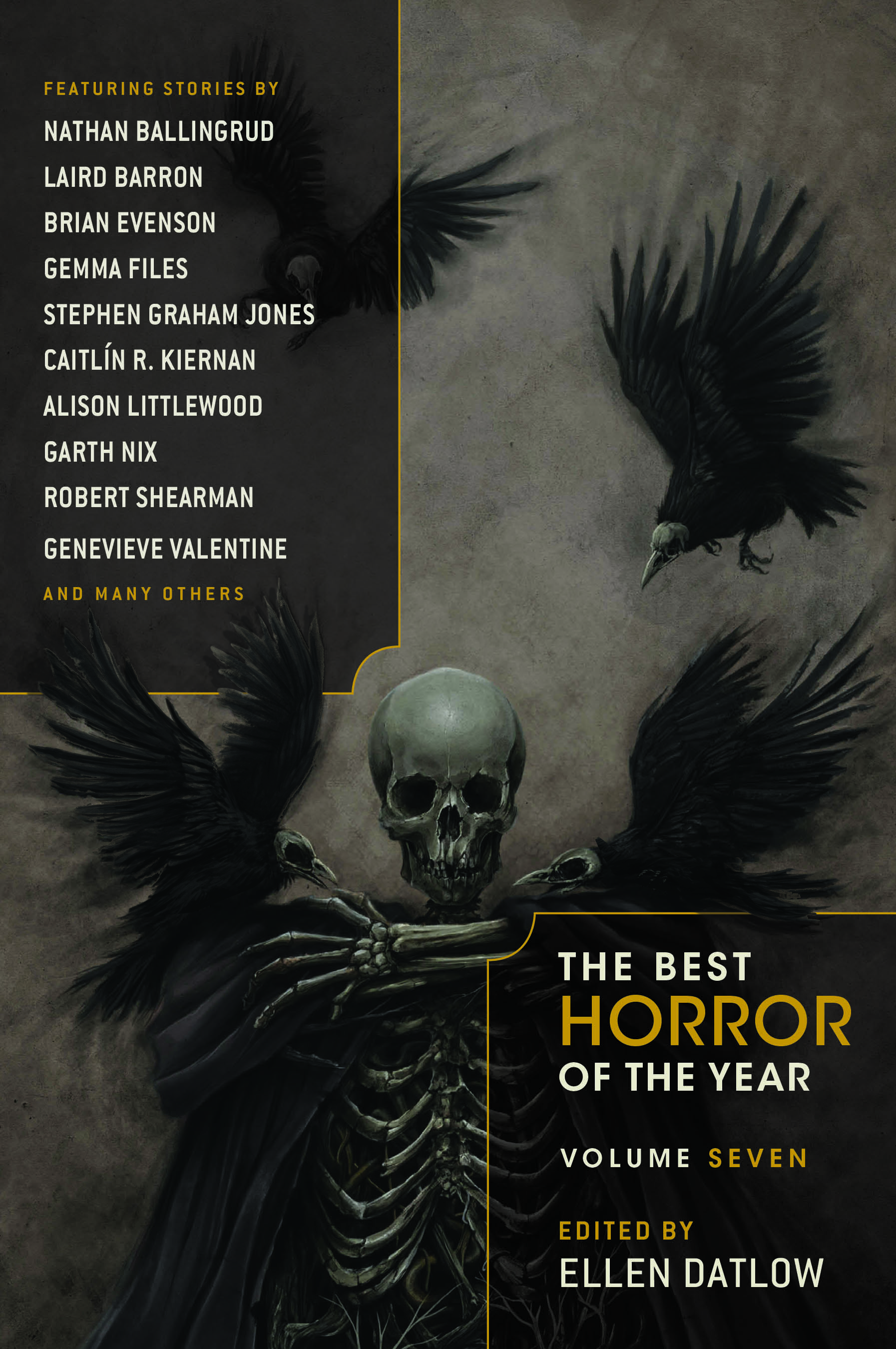 My Favorite Bit of editing The Best Horror of the Year, now in its seventh volume, is that it forces me to read so much short fiction every year and thus become aware of many new writers I’ve never heard of before.

Always, even after twenty-eight years of editing a best short horror fiction anthology, I’m surprised by how regularly I encounter this phenomenon. Sometimes, looking back, I notice that a writer I may have given an Honorable Mention to in an earlier volume, is someone whose work I’ve chosen to be in the most recent volume. To me, that means that they’re growing as writers and imposing on my consciousness-a very good thing. Paradoxically that’s also my least favorite part because I know I’ll never, ever finish as long as I’m doing the series!

Part of the fun of this series is watching writers continue to level up, accruing Honorable Mentions in my anthologies during the early part of their career, and then, like I said above, something clicks, and they make the leap from Mention to selection. But it’s always the story that jumps out at me, not the author, per se. Once I choose a story by someone for the best of the year, I’ll keep an eye out for more work by them-sometimes I even begin to solicit original work from them for future anthologies or for whatever magazine or website I’m working on at the time. Sometimes, it’s a one-off. That is, I may take a story for the best of the year and never take another one by that writer. Being included once doesn’t give anyone a free pass, unfortunately! There are only a few writers whose short stories wow me every time. Also, since some of my favorite writers only occasionally write horror, I might not include their work for several years.

I can’t speak for other anthologists editing horror bests of the year, but I suspect my definitions of what I consider horror might be looser. There’s a fine line between horror and dark fantasy, and horror and weird fiction. I’ll occasionally include something that while I consider it horror, other editors might not. I’m more inclined toward the creepiness of a story than to its “scariness”-very few stories scare me. Real life scares me. Horror stories do not. In any case, I’m certain that we all believe we’re doing the best job possible in creating great overviews of the year in horror.

When it comes to the writers I’ve worked with, I can never pick a favorite story of mine over the years; no way can I answer that! But readers can tell the stories I love and that stay with me by seeing what I reprint in other anthologies over the years. And hopefully those same readers will stay with me, too, for all the anthologies still to come!

Ellen Datlow has been editing science fiction, fantasy, and horror short fiction for almost thirty years. She was the fiction editor of Omni magazine and Sci Fiction and has edited more than fifty anthologies. She has also won many awards for her work, including the Bram Stoker Award, the Shirley Jackson Award, and the Hugo Award, among others. She lives in New York City.