When I was living in New York, I was invited to join the writing group Altered Fluid. E.C. Myers is one of the members and is smart, articulate, and just a nice guy. He’s also a darn fine writer. Today he’s going to tell you about his Favorite Bit of his new novel, Quantum Coin

There were plenty of good reasons not to write Quantum Coin when I did. I figured it wasn’t practical to write a sequel to a book that might never get published, let alone encourage representation from an agent. And I had always planned Fair Coin as a standalone novel, so I didn’t need to extend the story.

But once I had the idea for another adventure with my characters, I was far too excited about the possibilities to ignore it for long. Besides, I needed a distraction during the long wait for responses from agents. So as soon as I sent Fair Coin off to them, I began writing Quantum Coin, knowing there was a good chance it would never leave my hard drive. 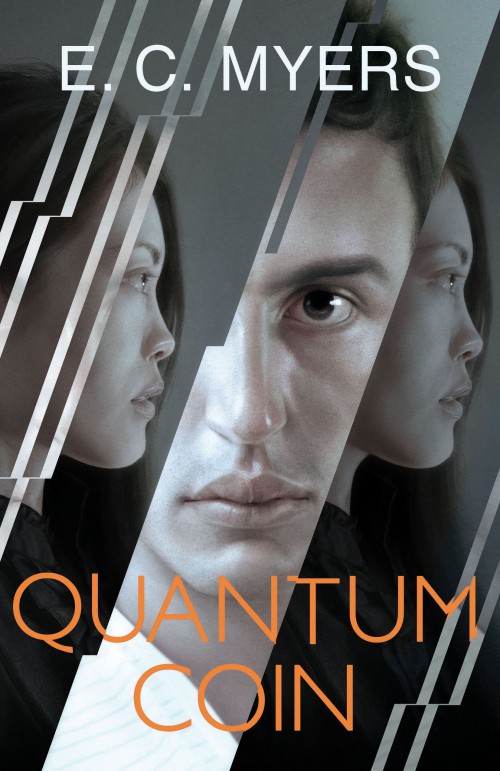 With the fate of the first book still in question, I felt free to simply play around and have fun with the next one. There was less pressure to prove that I could finish a novel and less concern about getting it published, and I had done most of the heavy lifting in developing the world and characters already. It was even easier to write; while it had been challenging to blur the lines between fantasy and science fiction in Fair Coin, Quantum Coin is a straight-up SF adventure involving two of my favorite topics—parallel universes and time travel.

Quantum Coin revolves around a major threat to the multiverse and how Ephraim and his friends from multiple realities work together once again (and sometimes against each other) to save it. To prevent the end of the multiverse, I decided I had to go back to its beginning.

When people think of alternate realities, many will remember Spock with a goatee or the TV show Sliders. Stories like these are increasingly popular these days, notably in the television show Fringe and films like Looper. But where did it all originate? Who came up with the idea that there could be other worlds out there just like ours?

The SFnal premise appeared as early as the late 1930s, but the scientific basis for parallel universes dates back to 1956, when a graduate student in physics at Princeton University, Hugh Everett III, wrote a thesis titled Wave Mechanics Without Probability. His paper was tweaked and published a year later as The Theory of the Universal Wave Function, commonly referred to as the “many-worlds interpretation of quantum mechanics.” It was not well received.

I first encountered Everett’s name while researching parallel universes for Fair Coin. He was sometimes credited in fiction, but not as often as you’d think. Why is a scientist that made a discovery so important to quantum physics, and even more influential on SF and popular culture, virtually unknown to most people?

It turns out that when Everett proposed his thesis on “relative states,” it was almost universally derided by the scientific community. Most physicists supported the so-called Copenhagen interpretation of quantum wave functions, in which there is only one universe, defined by an observer a la Schrödinger’s famed feline—as opposed to splitting the observer and his universe into many universes every time an event can have more than one outcome, as Everett proposed.

It wasn’t until the late sixties and seventies that Everett’s theories were dusted off, embraced by a few young physicists, and built on. His work was even highlighted in Analog. But it was too little too late. Discouraged, he had abandoned his work in physics and become an accomplished applied mathematician and computer specialist, doing contract work for the Pentagon and eventually creating his own consulting company. He made important contributions in weapons data analysis—in fact, in some ways, his theories may have helped avert a worldwide nuclear holocaust—but he had lived with disappointment for too long.

He was also in poor health, due to his vices of drinking, smoking, and eating extravagantly; he died in 1982 of a heart attack at the age of 51. His daughter committed suicide in 1996 with the hope of joining him in a parallel universe. His wife succumbed to cancer a short while later. Everett is survived only by a son who barely knew him, Mark Oliver Everett of the band the Eels.

Fair Coin owes much to Everett’s work and that of the colleagues who followed him, so I wanted to honor the father of the many worlds theory in Quantum Coin. I wanted to give him and his family a better, happier ending—and doing it through parallel literary universes seemed only appropriate. So early on I decided not to simply acknowledge his genius, but to make him one of the book’s main characters, enjoying some of the success and adulation he never achieved in life.

I had some reservations about fictionalizing a historical figure, particularly one who was alive not too long ago. My first stumbling block was a lack of information about him outside of a few Scientific American articles, a PBS special, and brief biographical sketches online, requiring me to just make up most of his character.

But happily, two years after completing the first, rough draft of Quantum Coin, I discovered that Peter Byrne had recently published a comprehensive biography of Everett, The Many Worlds of Hugh Everett III, which offered a wealth of information about his life and work. It was an essential resource in revising Quantum Coin for publication… but in the end I made up most of it anyway. I’m a fiction writer, after all, and who knows what Everett would have been like if his life had gone another way?

I did my best to come up with the answer, as respectfully as possible. I have many favorite bits in Quantum Coin—including nods to Star Trek and Back to the Future, epic time travel to the 1950s, complicated relationships and awkward romance—but near the heart of it all is the rarely-told story of one person. I hope I succeeded in doing his memory justice.

E.C. Myers was assembled in the U.S. from Korean and German parts and raised by a single mother and a public library in Yonkers, New York. He has published short fiction in a variety of print and online magazines and anthologies, and his young adult novels, Fair Coin and Quantum Coin, are available now from Pyr Books. He currently lives with his wife and a doofy cat in Philadelphia and shares way too much information about his personal life at ecmyers.net and on Twitter @ecmyers.