Dawn Vogel is joining us today to talk about The Boiling Sea, the final book in the Brass and Glass series. Here’s the publisher’s description:

In the turbulent skies of the Republic, it’s not always easy to outrace the storm …

With their destination determined, Captain Svetlana Tereshchenko and the crew of The Silent Monsoon are in pursuit of the Last Emperor’s Hoard and the fabled Gem of the Seas. Or they will be, once they rescue their pilot, make a deal with a notorious scoundrel, and outfit themselves for their plunge into the Boiling Sea. When they realize what the Gem of the Seas is capable of, they must struggle with their loyalties, morality, and unforeseen complications to choose the right path. With alliances tested and rivalries resurfacing, Svetlana must lead her crew and associates on their most dangerous mission yet! 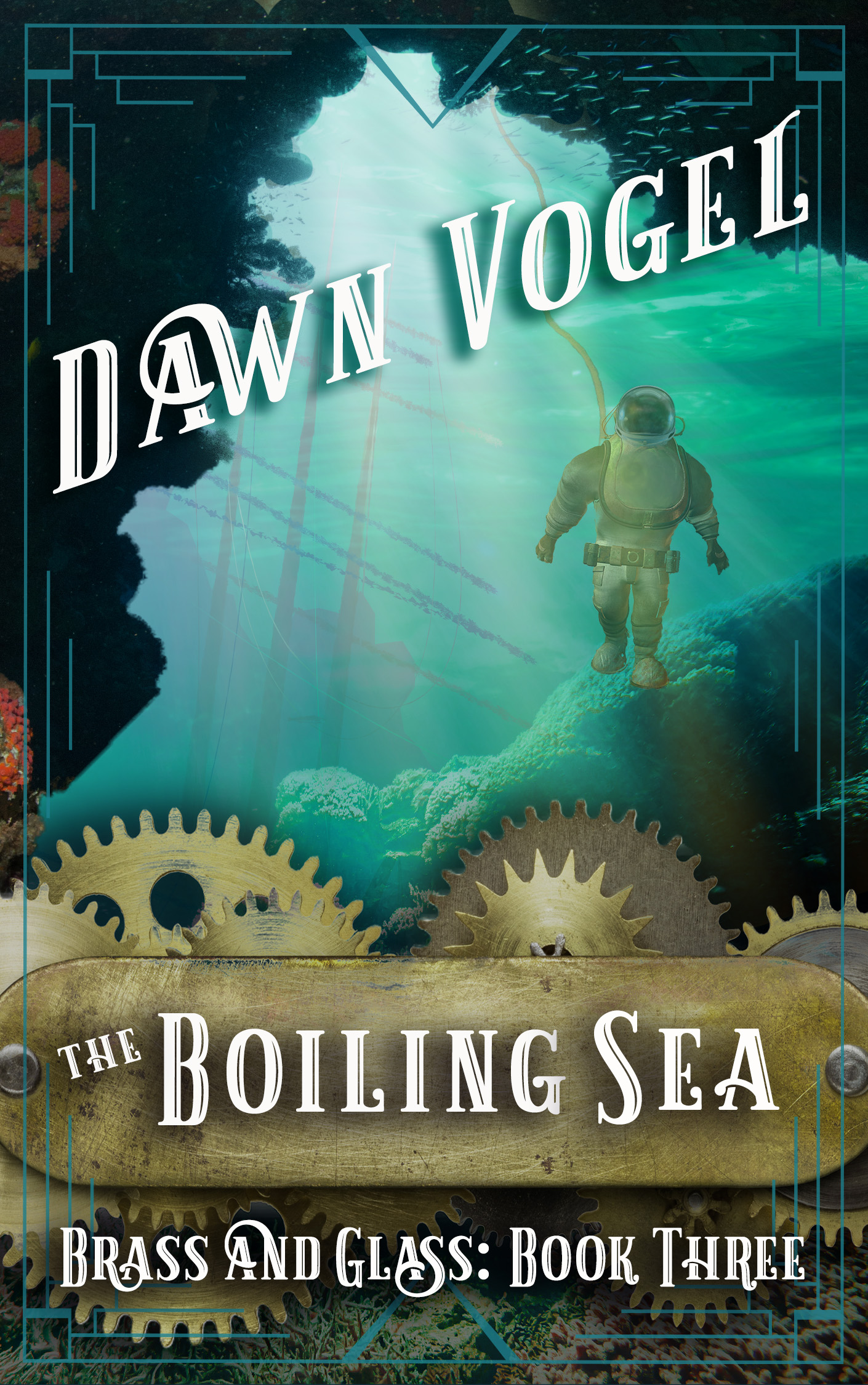 When I wrote the short story that inspired the Brass and Glass series, I had no idea that I would someday be poking at old patent drawings and other sketches as I tried to figure out how to send my protagonists to the bottom of a superheated ocean in search of a lost treasure.

I’m a historian by training, so research is in my blood. I love getting to dig up obscure facts and weird occurrences and work those into my writing. When it comes to my steampunk stories, I often find myself checking to see if there’s something close to the technology I want that existed in the late nineteenth century. Even if I’m writing a piece that isn’t set on our Earth, I can still use realistic technologies with a slightly different flavor to suit my purposes.

My research started with diving bells, which could be used to explore the ocean, but only from within the confines of a tiny amount of space. Diving bells were in use by the sixteenth and seventeenth centuries, so it absolutely made sense to have my characters have access to one of those. They had to rig up a system for air exchange, of course, so they could breathe inside the diving bell as they descended. I also needed to give them some way to communicate with their ship, which I accomplished with a bell and a length of string that ran through the tubing for the air.

However, I quickly realized that not only were my protagonists going to have to reach the bottom of the ocean, they were going to have to leave the diving bell. Diving suits, too, were in existence prior to the nineteenth century, so those were also viable for my story. This meant I got to dress two of my protagonists in horribly awkward and clumsy canvas suits with giant fish-bowl style helmets, and then throw all sorts of problems at them because of their suits, like a lack of weaponry that the stiff and oversized gloves could handle. Coupled with the fact that my main character, Captain Svetlana Tereshchenko, is blind in one eye, the diving suits provided a wealth of complications.

While there are certainly aspects of the science that I glossed over heavily in writing Brass and Glass 3: The Boiling Sea (like: how does a planet survive if the sea is literally boiling? And how deep are these oceans, exactly?), I loved getting to figure out the details of how characters with the equivalent of nineteenth century Earth technology could engage in deep sea diving and survive the experience. It scratched just the right amount of research itch for concluding my steampunk series.

Dawn Vogel’s academic background is in history, so it’s not surprising that much of her fiction is set in earlier times. By day, she edits reports for historians and archaeologists. In her alleged spare time, she runs a craft business, co-edits Mad Scientist Journal, and tries to find time for writing. Her steampunk adventure series, Brass and Glass, is available from DefCon One Publishing. She is a member of Broad Universe, SFWA, and Codex Writers. She lives in Seattle with her husband, author Jeremy Zimmerman, and their herd of cats. Visit her at http://historythatneverwas.com or find her on Twitter @historyneverwas.